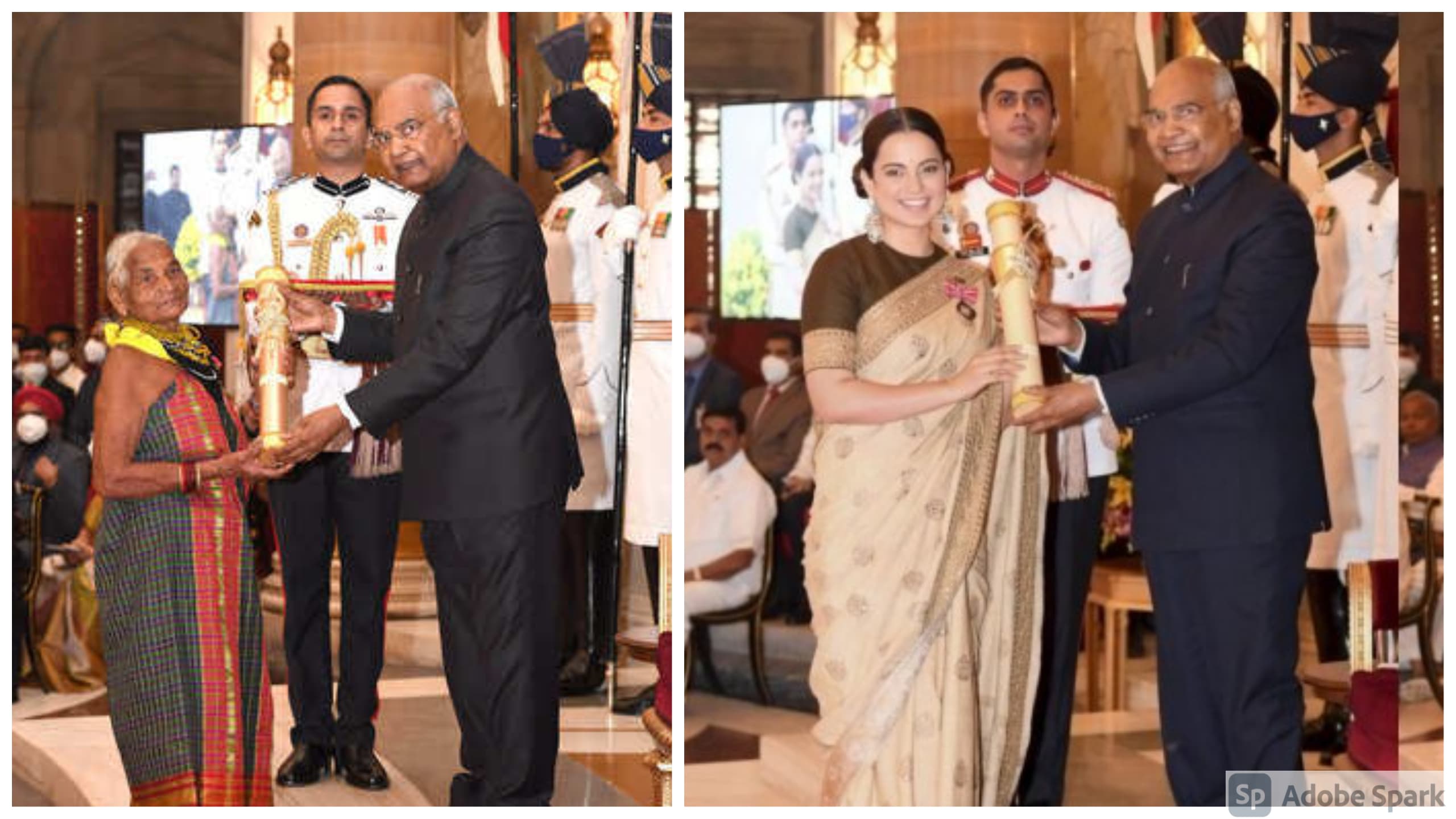 Whenever we talk about India’s civilian awards, more often than not, we skim through lists upon lists of purported movie stars. The said movie stars whose sole contribution to the Indian polity has been delivering blockbuster movies with little societal significance.

The fact that the numerous citizens who have had much more contributions of note were snubbed for the awards only seems more ludicrous with each passing day.

It is fairly obvious to note that the qualitative growth of an average Indian Joe has been awe-inducing. The said growth is not limited to the growth of the particular individual but also the society at large.

Hence, with the Padma Shri awards being given out to the year’s recipients this week, we tend to notice a change in pattern that has been a long time coming.

How Did The Padma Shri Change The Face Of Indian Influence?

This week’s Padma Shri went beyond the traditional and the conventional when conferring upon recipients India’s highest civilian award. The entire portfolio of the many recipients of the said award for 2021 is unanimously better as it considers the human contribution of an influential person in their respective domains.

The realization of having actual contributors being bestowed with the apex commendation was fairly late, however, as they say, better late than never. Hence, it is only fair to give the recipients the respect that has been long overdue, for they are the ones who make India a country of such celebration and love.

The spotlight spotted and followed environmentalist Tulsi Gowda, the tribal activist from Karnataka who is often referred to as the ‘Encyclopaedia of the Forest’. Belonging to the Karnataka based Halakki Tribe, her fabled name comes from the fact that she possesses extensive knowledge concerning a diverse species of herbs and plants.

Hailing from deep-seated poverty owing to a lack of representation for tribals, Tulsi Gowda began working with her mother at a government nursery from the tender age of twelve. This enabled her to better understand the plant kingdom, which inevitably led to her acquiring the title of ‘Encyclopaedia of Forest.’ 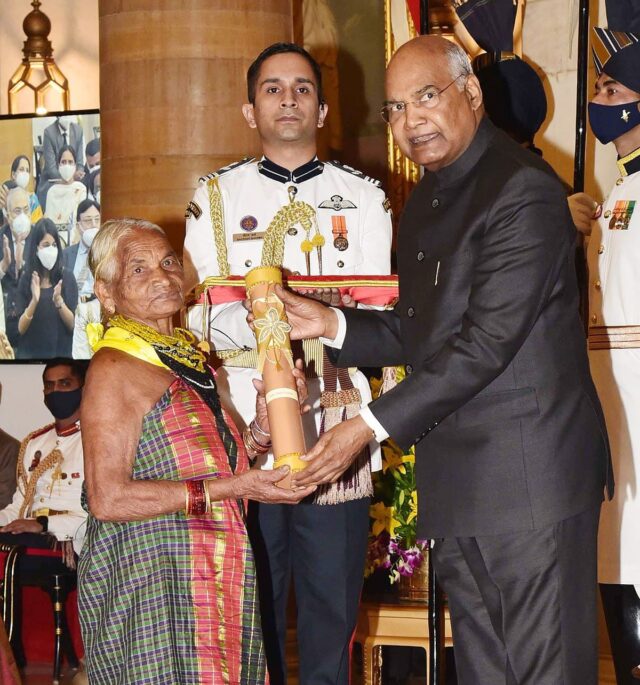 The tribal wonder-woman, Tulsi Gowda, has a story that only seems more fantastical as one ventures onwards. Gowda with each passing year planted more and more saplings at her own behest.

Her environmentalism goes beyond the metaphorical and performative as most people have come to expect out of any and all forms of social work. She has successfully planted approximately 30,000 trees up till now and she only aims to do more.

She was also offered a permanent job with the forest department, where she had been a volunteer with her dedication towards nature conservation attaining awesome repute.

On that very same note, there were numerous other such awardees who have changed Indian society for the better, a step at a time. As has been the norm since the most ancient of times, the road to Valhalla is a long walk and it can only be achieved in collectives.

Thus, for that very same walk to Valhalla, we require an individual who discriminates not through complexion, religion nor creed, for there should be equivocal respect in death. One would not have to look any further than our very own Uttar Pradesh where Mohammad Shareef stays. 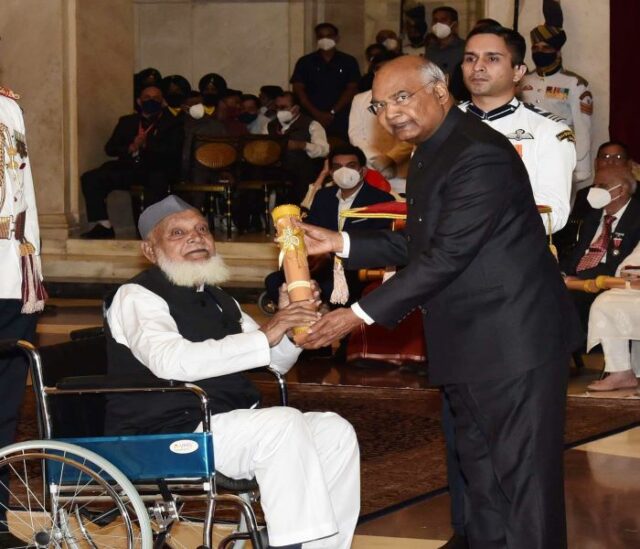 It would be unfair to call a person like Mohammad Shareef an individual like you or me who belongs to a particular religion. People like Shareef belong to a realm that lies beyond the petty squabbles of the religious for they contort to provide everyone with the solace one craves for upon achieving their eternal slumber. A bicycle mechanic turned social worker, based out of Ayodhya, never thought or wished for such hail.

He did it through something as juvenile as mere goodness, expecting nothing in return. Often called the ‘Last Rites Samaritan’, he has completed the last rites of over 25,000 unclaimed bodies and continues to do so. Dignity in death, a right seldom made available to thousands of people, has been made possible by a singular person in UP.

These two are but few examples of influential citizens who have rightfully bagged one of India’s highest civilian awards. It is through the dedication of common folks such as them that we have been enabled to look towards and wish for a society that shall thrive, through camaraderie.

Yet, the party shall go on for another line or two, for the real MVP of the entire Padma Shri list is the inclusion of HC Verma. The man who changed the entire method of teaching physics in schools, and, intermittently, revolutionized education by making education and physics fun enough for students to not lose their hair with each thermodynamic equation.

Verma, a man of many titles, is a revolutionary and almost all aspiring engineers owe a tad bit of a thankful bow to him for his ‘Concepts.’

Are We Heading In The Right Direction?

Most people have turned the entire discourse concerning the Padma Shri winners into a question of patriotism with venomous undertones.

It must be understood before dwelling any further that the Padma Awards sparsely deserve any question politics for that would make the argument fundamentally stronger in lieu of the likes of Kangana Ranaut, Ekta Kapoor and Karan Johar bagging the awards.

It is a shame to state that the world’s biggest democracy still reveres the many ‘celebrities’ who choose to look the other way or become the players for the government on the playing field and make them look good in front of the people at the cost of a third party’s dignity. 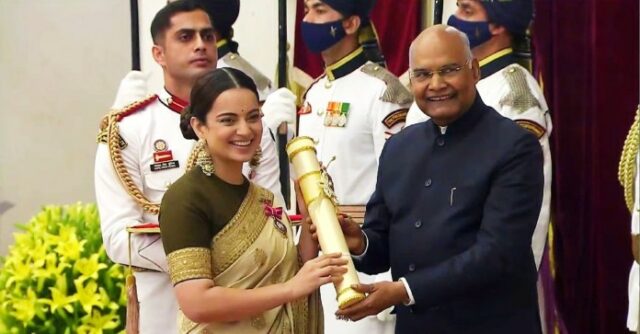 Yet, that is the truth of the India that we live in today. As much as we have extremely deserving candidates receiving the Padma Awards with succinct grace, there exist recipients who use their awards as a medium to spew their contagious venom.

Unfortunately, their followers still wag their tails at their beck and call. Politics has no place in commemorating people who have fought, persevered and changed our society for the better.

Hopefully, the only star worship that shall follow hence, would be of the Gowdas and the Shareefs present across India. They only await to be searched.