(We did a mock drill at 7 am. We made it [oxygen supply] zero. Then 22 patients who were likely to die were filtered out … We immediately restored supply. They started turning blue… 74 remained… We got time… This was our biggest experiment)

These horrifying words are from this video of Shri Paras Jain Hospital of Agra that has been doing the rounds on social media. Its owner, Dr Arinjay Jain could be heard contemplating a mock oxygen drill wherein they would allegedly cut the oxygen supply for five minutes to determine which patient needed it badly.

After the video recorded on April 26th caught up to the trend, the hospital was sealed by the district administration.

The Unverified Nature Of The Truth

Jain could be heard saying that the “biggest supplier” of oxygen in Agra had warned him of a limited oxygen supply that would last only until the morning of April 26. Upon this, he talked to the guardians of the 96 patients admitted at the hospital to make separate arrangements. When everyone refused to budge, Jain had to proceed with the “mock drill” to segregate as to who needed it the most.

Also Read- Is This Matrimonial Ad Wanting Groom Only With Both Doses Of Covishield Done Real?

Countering his statement, Agra’s district magistrate Prabhu N Singh has emphasized that there was no oxygen shortage. “The administration supplied 149 cylinders to Paras Hospital on April 25, 121 on April 26, and 117 on April 27 with 20 as backup,” he said, adding that Jain must be booked for violating the Epidemic Diseases Act, raising false alarm under the disaster management act and disobeying official orders under the Indian Penal Code.

While rumours have been going around that the 22 patients who were “eliminated” as termed in the video have died, Mr Singh has clarified that they haven’t. Nonetheless, a probe is being conducted into the matter to ascertain the truth.

Meanwhile, Dr Jain has concluded that there was no such “mock drill” conducted but has agreed that the voice in the video was his.

Developments In The Matter And What Does It Mean For Us

The hospital has been sealed as of now and the patients will be shifted to another hospital. Surprisingly, this isn’t the first time such a thing has happened. It was sealed for three months in 2020 for admitting unauthorized patients but was later re-opened as a COVID facility. 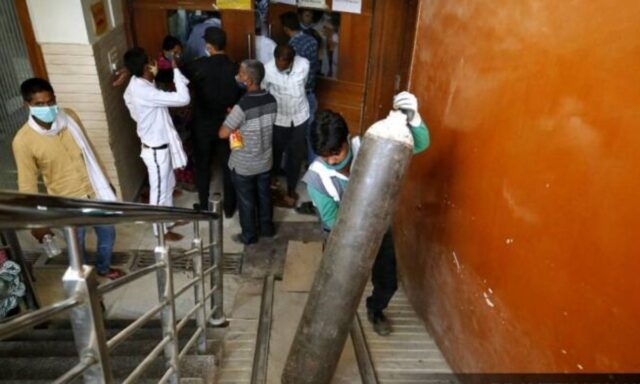 While the district magistrate has asserted that there was no shortage of supply and neither was there any related deaths, witnesses speak otherwise. Ashok Chawla, 43, a local contractor was asked by Jain to arrange an oxygen cylinder for his 71-year-old father on April 12. He agreed to Jain’s statement that there was an oxygen shortage at the hospital. Several other witnesses have also poured in similar experiences, raising speculations that the “mock drill” was being planned for.

If we focus on the duration between Chawla’s situation and the day on which the video was shot, they have a gap of well over 2 weeks. This raises a crucial question as to for how long had the hospital been out of oxygen supply?

For if this is true, it poses a severe threat to India’s COVID preparedness. With an impending third wave knocking at India’s doors, it questions the preparedness of India’s healthcare and medical facility, life-threatening steps taken by the hospitals, and the authenticity of the facts of the authorities, all of which were dwindling severely amidst the second wave of the pandemic.

Which States In India Have Had The Highest Success With Their COVID-19 Vaccination Drive?