There are few phrases that we have been hearing since our childhood, ones that we started to almost dismiss as nothing much.

One such phrase was the age-old ‘girls mature faster than boys’. I remember hearing this multiple times from relatives, teachers, friends, seniors and many other people too.

Often it would be directed at me or my female peers as a way to make us understand why we have to make certain changes in our life and actions.

The statement would then be followed with the senior person explaining to us in a gentle tone of how since girls mature faster, we need to be more careful of our actions.

Somehow this phrase has always been used to load all the ‘doing’ burden on girls and let the boys get away for any of their bad or poor actions.

When a brother or sister are fighting, the sister is always asked and expected to be more understanding and to let it go.

Or in another scenario with a husband and wife, where if he acts irresponsible anytime, then the wife is supposed to not only act perfect in all situations but also cover up for the immature actions of her husband.

And always in a fight the girls are expected to give up since we should be more understanding of the family dynamics…we should be the ‘mature’ one!

If tomorrow a boy does not do the housework or missed out on it, then elders would very easily use the other part of the phrase that ‘boys mature later in life’, and hence they understand their duties and responsibilities late.

Even during the festival time or for any function, it is always expected of the girls to make sure all the arrangements are in place. They are supposed to be properly dressed and doing all the work to make sure the event can start on time whereas the boy is only expected to show up at the last minute.

Does This Phrase Work Against Women?

So I was not very surprised when I came across this tweet and how relevant it is even to this day. 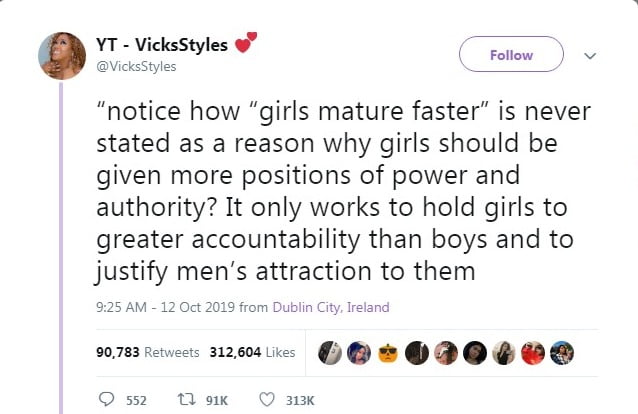 This train of thought hit me really hard especially when you realise how few women there are in top, leadership positions.

In fact, recently there was even a lot of backlash that the Forbes 100 Most Innovative Leaders List got for having only 1 woman and 99 males.

The list that Forbes proudly stated as listing out the most creative and successful business minds in today’s time had place for only 1 woman, Barbara Rentler, CEO of Ross Stores.

Even in that, she was not graced with a photo unlike the other male CEOs who had smiling pictures gracing their names.

Although the people who were involved in the ranking did come out and reveal that this was due to very few women actually qualifying for their criteria, it does bring up the question as to why women are so rarely given leadership positions.

This is not just something limited to only one country, instead it is a global issue.

In the US while women make up a good 47% of the workforce it is disappointing to note that only 26.5% of them are given the executive/senior level position in large U.S. public companies.

The number for women CEOs in such companies stands at a shameful 5.4% according to Catalyst.

It does not end here, but it has also been observed how even when women are made the CEO it is often of companies that are going into lose or are in crisis. Some examples of this include Marissa Mayer at Yahoo! or Carly Fiorina at Hewlett Packard. 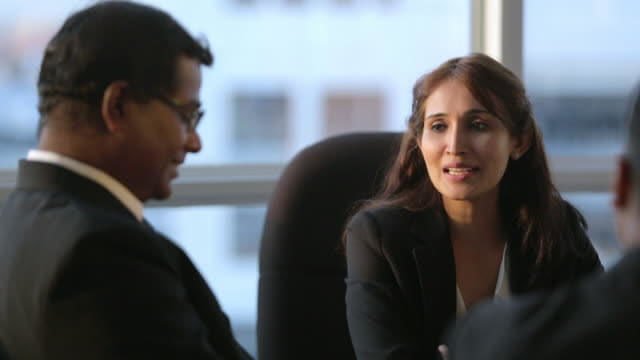 Read More: Why Is Our Generation Mentally Weak In Terms Of Handling Ordinary Problems: Reasons and Rationale

India is no better with women only comprising 3% of the senior level positions like CEOs or managing directors.

As per a report by Economic Times “Out of every 100 CEOs and managing directors of companies listed on the National Stock Exchange, only about three are women, and this has been the case since 2014.”

According to data collected by Prime Database as recent as March 6th 2019, out of the 1,814 chief executives and MDs of NSE-listed companies women only amount to 3.69% or 67.

Imagine, since 2014 the amount of women CEOS/MDs has remained the same and not increased. 67 women out of almost 2,000 CEOs is a disappointing number. 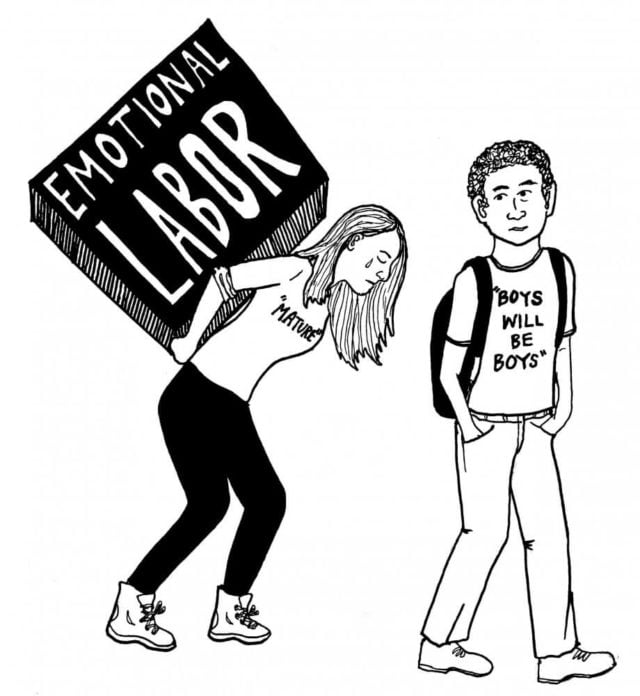 So Why Aren’t Women Given More Leadership Positions?

This brings me back to what the tweet is asking and why if girls mature so much faster to boys, are they not given more leadership positions.

Going by society’s logic, women should be the first contender since they are more mature and thus can take good decisions as a leader.

“Boys cannot control themselves around girls. Girls must stay alert”

“It’s natural that girls are better in class. Boys have to run about and do sports and fight”

as user @T_Delphos very correctly said, it only endorses the fact that women reach both physical and emotional maturity much faster compared to boys.

So why then is that phrase only used to make girls more cautious and conscious of their actions but not as a way to benefit them?

If I’m not wrong, being mature is said to be a big criteria for being a leader. Because maturity helps in:

Also doesn’t a mature person have a better understand of the consequences of their decisions?

So if all this goes in favour of a mature person and the age old phrase states that girls mature faster to men, then doesn’t it make the equation super clear that women are more worthy of leadership positions than men?

Or does the corporate world also brush under the rug impulsive, immature decisions of male leaders which can potentially harm the company’s interests by using the phrase of ‘boys mature late in life’?