HomeLifestyleFUN, FROLIC AND PHOTOS: BRANDON STANTON IN CONVERSATION WITH THE HUMANS OF...
Lifestyle

FUN, FROLIC AND PHOTOS: BRANDON STANTON IN CONVERSATION WITH THE HUMANS OF DILLI (It says “For those of you in Delhi who want to say hello, I’ll be in Central Park, Connaught Place at 6 pm.”)

My reaction and probably that of many others was that of “Oh My God!!!? I need to be there… Pronto!!!” And so Delhi rushed to Central Park, CP to get a glimpse of Brandon Stanton, the storyteller who brings out the extraordinary, unheard, unknown and unacknowledged tales of several New Yorkers ( Now New Delhiites as well) as they get on with their mundane lives in the Big Apple, through his photoblog, ‘Humans of New York’.

Humans of New York is one of the few photo-blogs that have garnered such widespread popularity that people of all ages have heard of it and can identify with it. I personally think that pictures speak a thousand words and when it comes to Humans of New York, the pictures actually convey a thousandfold more and generate an impact globally that none of us can imagine. It gives people a platform to defy stereotypes, overcome obstacles, provide hope to all those who need it and share a part of our lives with others, who care to listen to our stories and value them. Today, I, as an Indian, sitting on my laptop, can identify with the problems of a construction worker in New York. I can share the joys and sorrows of a person, who is in no way related to me, belongs to a different time zone altogether, but has the power to make me look at life in a completely new perspective. THAT, my friend, is the power of Humans of New York.

Before, I get on with the proceedings at Connaught Place, let me tell you how Brandon ended up in India in the first place. He is currently on a world tour sponsored by the United Nations, as a means of promotion for the Millennium Development Goals. He aims to convey the problems and stories about life in areas such as Jerusalem, South Sudan, Ukraine and Haiti, among others. The step to utilise Humans of New York as a promotional vehicle is amazing, as it gives people the once in lifetime opportunity to convey their stories to a large audience across the globe, and generate awareness about the real day-to-day situations faced by them. It conveys their hopes and aspirations about a future that may seem uncertain right now, but could get illumined with a little help from you and me.

Coming to saadi Dilli, the meeting that began at 6pm in Central Park, CP had the area flooded with fans of HONY. Brandon, however, reached the scene much earlier, at 4:30, armed with his trusty camera. Many spotted him, clicking away to glory and looking for a fresh story. Also, in a never seen before incident, many Delhiites actually reached the venue at 5pm ie. 1 hour before the scheduled time !!!!

The event was a light-hearted affair, wherein Brandon interacted with the people and answered their questions about his experiences as a photographer and his personal life, in a genial manner, making each person believe he was genuinely happy to see them and appreciated that they took some time out to visit him. He also gave some cool advice to the youngsters on the lines of “Never wait for the perfect moment. Whenever an idea strikes your brain, go for it. Don’t wait for the idea to become perfect.” On being asked about the interaction with Brandon, Drushti Joshi, an attendee said “It was super chilled out. He talked to us so normally. He’s super grounded and humble. Did not act like a celebrity. Told us about how he got into photography, how he chooses subjects and told us about some of the most profound stories he’s come across”.

However, no major informal youth event in Delhi can go without it’s share of drama and this one was no different. The Delhi police in this case played the baddies. In a bid to prevent commotion (perhaps they presumed it was a student movement on some dead serious subject, which could lead to the next Chittagong uprising with Brandon as the leader :P) began enquiring about the person accompanying him, only to be greeted with the jubilant response, “HE’S WITH ALL OF US!”. All this warmth and feeling of oneness of Delhiites makes me want to sing, ‘This happens only in India’.

Alas, all good things must come to an end. After being chased by the police, Brandon decided to call it a day and requested the crowd to pose for a group photograph, representing the spirit of India. In order to do so, he ran ahead of the crowd, only to be followed by the them as they ran with him as far as the eye could see… 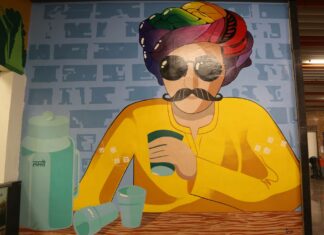