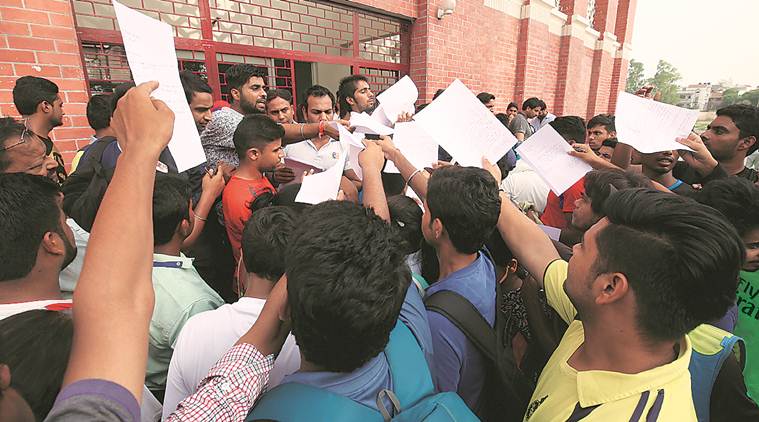 So it’s ‘that’ time of the year again. Admission applications for various colleges are being stamped, sealed and sent away to the ‘dream college’.

Every student with a mind for undergraduate studies are busy thumping their names and choice of courses in the application forms.

Full of hope that the exams they are taking may get them just enough marks to make it to the college of their choice. Enough marks. Now that is one hell of a subjective phrase.

What, in the present scenario, are considered to be ‘enough’ marks?

If we consider talking about the University of Delhi, turns out you have to pull off at least a 96%, since 99% is the new normal, to permeate through to the North-campus college of your choice.

Last year, in an attempt to declare ‘more realistic’ cutoffs and pretending to be reasonable, the university started off by declaring a 98.75% cutoff for BA Programme students at LSR, which would include a 2.5% sanction in case a one had a non-humanities background.

Now, what we gather from this is that if one has not studied humanities in Grade 12, they are supposed to score a 101.25% in their boards to make it through.

Cool! Basically, all one has to do is to persuade the complete mathematical and educational system to somehow give a 101 on 100 just so you can permeate to that one college. You can do that, right?

Also, if you happened to get a 94.75% in a college that only wants 95 percenters, I hate to break it to you, you are just not as capable as those who got one mark more than you!

So, to all those people who rant on how marks don’t matter, take it from one who knows.

TOI reported that in 2018, a 93.20% scorer, UP Board class 12th topper would’ve struggled to make it to one good North Campus college.

The ISC topper Meghna Srivastava, who missed a hundred percent by a mark, considers DU to be “overrated”, questioning that once a person leaps through the cut-off wall, “What next?”.

Students have increasingly been looking to pursue their graduations abroad citing the unreasonably high parameters and very low outputs as a deterrent.

“Foreign education would hone my skills, value my aptitude and guarantee me a job, the same, I’m afraid, cannot be said of Indian education”, says Shivansh who’s “loving” Physics at University of Edinburgh, Scotland.

Related: What Do We Know About The Weird Changes And Updates Being Considered For DU Admissions 2019?

So, to make-through (it’s kind of a thing!), you have to score incredibly high in History, Geography, Psychology or if you’re a science student, then perhaps in Mathematics, to level your Best of Four to clear the BIG-C.

It doesn’t matter if you have an aptitude for English; if you love to wallow in Shelley and Shakespeare, or can quote Byron casually; as long as you don’t show the figures on paper, it’s ‘good luck with your future but not at DU. Sorry.’

One might be led to question that why is this happening? When the world’s topmost universities demand ‘just’ a demonstration of your skills in the form of papers and ideas, maybe sometimes extra-curriculars, then why are we Indians cobwebbed to the idea of Board marks as a representation of a seventeen-year-old’s lifetime achievements?

Are board marks credible enough to decide a student’s future?

Well, the universities are not the one to be blamed here, TBH. The high cutoffs are certainly indicative of the fact that a huge number of students have been high scorers in the board exams.

As long as there is a rote-oriented, non-practical, liberal marking setup, witnessing any positive change in the admission pattern is improbable.

Naba, a student of English at Jamia Millia Islamia, opines that all this can be traced back to an ‘incredibly messed up education system that promotes a skewed concept of merit’.

While the officials argue that cutoffs are raised in proportion to the merit of students, which, according to them, is on “an all-time high”, the reality where unemployability exists cries in dissent.

What we need is a multi-dimensional screening process. Students need to be tested on their aptitude for a particular subject through essays, papers, interviews, and not just judged and dismissed on marks in one single exam!

As someone has said, “Our education system is the society we live in”. If we want a better future, its high time we take cognizance of the same. Concerned authorities really do need to look into these matters.

For it is through education and education only that one can shape a good future. And the present scenario at DU admissions is certainly not helping.

Dropping A Year For Competitive Exam Studies Was A Huge Decision For Me; It Can Make Or Break You