Online scamming is nothing new. Since time immemorial, we’ve received spam emails from Nigerian princes and princesses, or widow of a billionaire, saying how they wanted to leave us millions or billions of dollars and that they would require some contact details from us to get the payment through.

I will admit that when I was a wee lass (small child), having just gotten my first spanking new Yahoo account, I would often read those long emails I got. I was pulled in by their story, but being an Indian child I knew to not even ask my parents for their details, even if it resulted in us getting bucket loads of money.

With the rise in technology, hacking and cyber crimes have only gotten worse. These days virus and hacking software can be easily shared through documents and files in emails, phone calls, SMS and even WhatsApp.

Scamming people is even easier in today’s time considering how almost all of our data is digital and thus can be tracked down if one wanted to.

But it seems that hacking can actually even be used for something good. A British man uncovered a scam call center by hacking into their CCTV camera and seeing their daily operations. 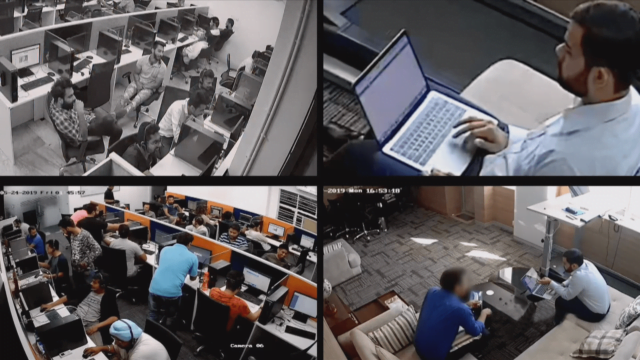 What Did This British Hacker Do?

A British man using the pseudonym ‘Jim Browning’ hacked into a Gurugram based call centre’s CCTV footage and used it to spy on their racket.

Browning is a YouTuber whose channel has 569,000 subscribers and more than 47 million views on his videos. On his channel, Browning has posted videos like ‘hitting back at scammers’; ‘how to bust a tech support scammer’; ‘accessing a scammer’s PC; ‘the $3 million scam call centre’ and more.

His latest target was this call centre operating from the Sonit Tower in Gurugram. Here he was able to access different CCTV cameras of the office, including one at the front gate, one in the main office and even the one in the founders office.

He hacked into their CCTV around May 2019 and then passed on the footage to BBC Panorama who revealed what all this call centre was doing to its innocent victims.

Browning apparently went through over 70,000 phone calls and hours of video footage from the office before taking any action.

In one of the clips that he uncovered we can see one of the employees at the company scamming an unsuspecting British citizen. Using the alias ‘Chris Lawson’ and stating that he was working from San Jose, California, the Indian employee asked the victim to send over £1,295 in order to get his computer ‘fixed’.

Apparently it sounds as if the victim started to panic and cry a little, to which the scammer said that, “Hey, why you crying, man? You’re a very good man. Why are you crying?”

The victim revealed that he was suffering from depression and that brought on the extreme reaction.

Read More: Did You Get Trapped In The Netflix Phishing Scam?

There were also clips where the fraudsters were laughing at these victims and their reaction to sending over money. Later on, Amit Chauhan, who runs the company was even heard telling his employees that, “we don’t give a **** about the customer”.

Another customer said that he only had £90 in his bank but was told to pay £150 if he wanted to get his machine fixed. The man also revealed that he was going “to use the £150 to buy some shopping with today so that’s buggered that and all sir”.

Apparently, this scam earned the owner and its employees a whopping sum of around $400,000 a month. The BBC report also showed how the owner lived a lavish lifestyle because of this.

When Rajini Vaidyanathan, BBC South Asia Correspondent, asked the owner, Amit Chauhan, about his scams, he refused to answer and then abruptly hung up the phone.

What Was The Scam

The scam worked through fake pop-up warnings that told them that their computer was blocked and to call a number claiming to be of ‘Microsoft’. 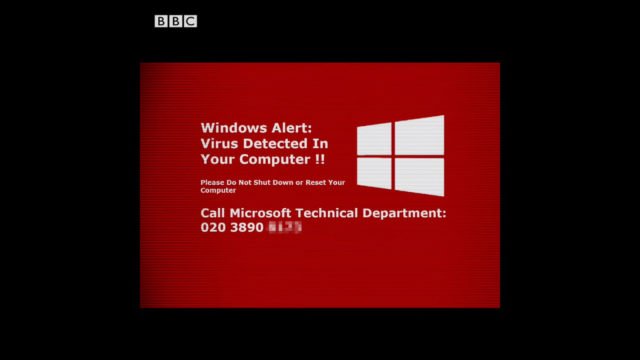 This type of a pop-up would come up, and when the victim would call on the number given they would be redirected to the scam call centre where the scammers would then ask them to pay a certain amount if they wanted their computer fixed.

In fact, Browning himself called the centre and asked them why they were scamming innocent people out of their hard-earned money.

When Browning’s connect said that he was from San Jose, Browning asked him, “Can you name me one restaurant in San Jose?”

The fraudster then got prissy and asked Browning to book a ticket and come to California to assure him that he was speaking the truth. Browning who could see everything, called out the fraudster for using Google to search for an answer to his question.

“I just can’t understand why you’re not honest here. Because I can see exactly what’s going on.”

“I just want to know why you’re scamming people.”

The fraudster then abruptly said “I don’t want to answer these questions, sir,” and hung up the phone to go back to playing his game.

See this and more in this video here (click on the sentence).

OR https://youtu.be/7rmvhwwiQAY (copy paste in browser if the above link doesn’t work).

Latest reports have said that Haryana police has taken action after the expose and registered a criminal case in District Gurugram against Chauhan and his partners. Further investigation has started and final verdict is awaited.

It is interesting to note though that the PayPal account of the scammer was not taken down even after multiple complaints and the expose too.