The Books vs. Movies Debate Continues…

DISCLAIMER: Only proceed to read this article if you have no objection to spoilers. If you haven’t watched a lot of movies, or read a lot of books, but plan to, I would strictly advise you to not to go any further.

Another thing, I am not against movies, or turning books into movies. No use preaching that books are better than the movies, we still go and watch them anyway. So yeah, no movie bashing. At least not the kind you’re expecting.

How would you feel if you were watching Harry Potter and The Half Blood Prince, and instead of dying, Dumbledore survives the fall from Astronomy Tower? And then, he whipped up a spell and in an enthralling duel with Voldemort (with some help from Harry, of course) ended the war there and then. There! A happy ending for everyone. You think about it, it might sound quite appealing for a second; to have Dumbledore alive, the man with all the answers, life would be so easy, wouldn’t it? Think again. Would you really have liked the movie to deviate from what happens in the book? Would Harry ever have achieved his feat, without relying on constant help and advice from this great personality? I don’t think so. There is a reason why a writer does what she does. And if you’re basing a movie on their book, I believe you should try not to destroy the sanctity of their art and expression. It’s like while changing the ending of a story while narrating it to someone simply because you thought your ending would be better. No work of art is perfect, I agree, but that does not mean you have to MAKE it so. You possibly can’t.

ALL YOUR LIFE, YOU’VE BEEN SAYING, ‘LIE TO ME’

What if Jay Gatsby had lived and had a happily ever after with Daisy? Heavenly, isn’t it? Not really, no. It just sucks the life from the movie experience. After all, a happy ending isn’t always the best thing.

Being one of the few who’d read the book before watching the movie, I as severely disappointed by ‘My Sister’s Keeper’. It is alright till you’re making minor changes. But killing off the wrong sister? SO not cool.

Even Jurassic Park, Breakfast at Tiffany’s and Forrest Gump have different endings from their books. John Hammond and Ian Malcolm do not live.  Holly and cat are not reunited, and there is absolutely no romance. Forrest starts a shrimp business in Bubba’s memory and does not end up with Jenny. Moreover, Winston Groom starts Gump and Co., the sequel to Forrest Gump, with Forrest saying “Don’t never let nobody make a movie of your life’s story.”

And as if that wasn’t enough, people in the film industry have messed with children’s books too. Yepp. The Little Mermaid. Disney lied. Ariel never got to marry the Prince. She jumps off the ship and dissolves into the foam. There is no happy ending. It is indeed sad, when you come to know your childhood was a lie. This raises an extremely important question. Should directors or screenwriters be allowed to mess with a book’s ending? It is almost alright when they have to (majorly) cut and patch details but do they take it a step further when they try to change the ending? If you are so fond of editing, why don’t write a spin-off? Or a fan fiction? But for heaven’s sake, please don’t disrespect an author’s genius and mettle. It’s like scooping out an artist’s soul. Altering the finality, the closure one gets from a piece of literature isn’t really seem the correct way to honour (even if you don’t want to) the piece. Though one does have to be bold to do so, it will most definitely not be appreciated by the original creator and his/her readers.

The only movie ending they COULD have changed, but didn’t would have resulted in the continuation of the series. Yes, I’m talking about not killing off Voldemort and instead, making him vanish in a cloud of smoke, with a promise of return. Ahh! The 9th Harry Potter movie. Bliss, almost.

And if you haven’t watched Paper Towns or Gone Girl yet, I’d suggest you read the books first. Peace be to the books.

Facebook
Twitter
Pinterest
WhatsApp
Previous articleStudying In Allahabad, I Traveled By Delhi Metro For The First Time & This Is What I Felt
Next articleFive Latin American Writers That One Should Not Miss 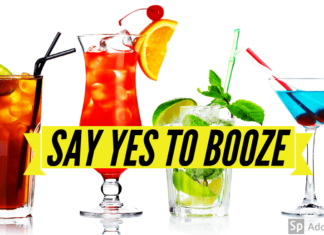 Benefits Of Alcohol Every Millennial Should Know For The Next Party...

Swarnima Ruria - October 23, 2021
Downing a whole bottle of vodka or wine might be the best idea for a wild party night but deep down we all are...