Home ED Originals Back In Time Back In Time: Rajiv Gandhi Assassinated By LTTE Suicide Bomber In Tamil... 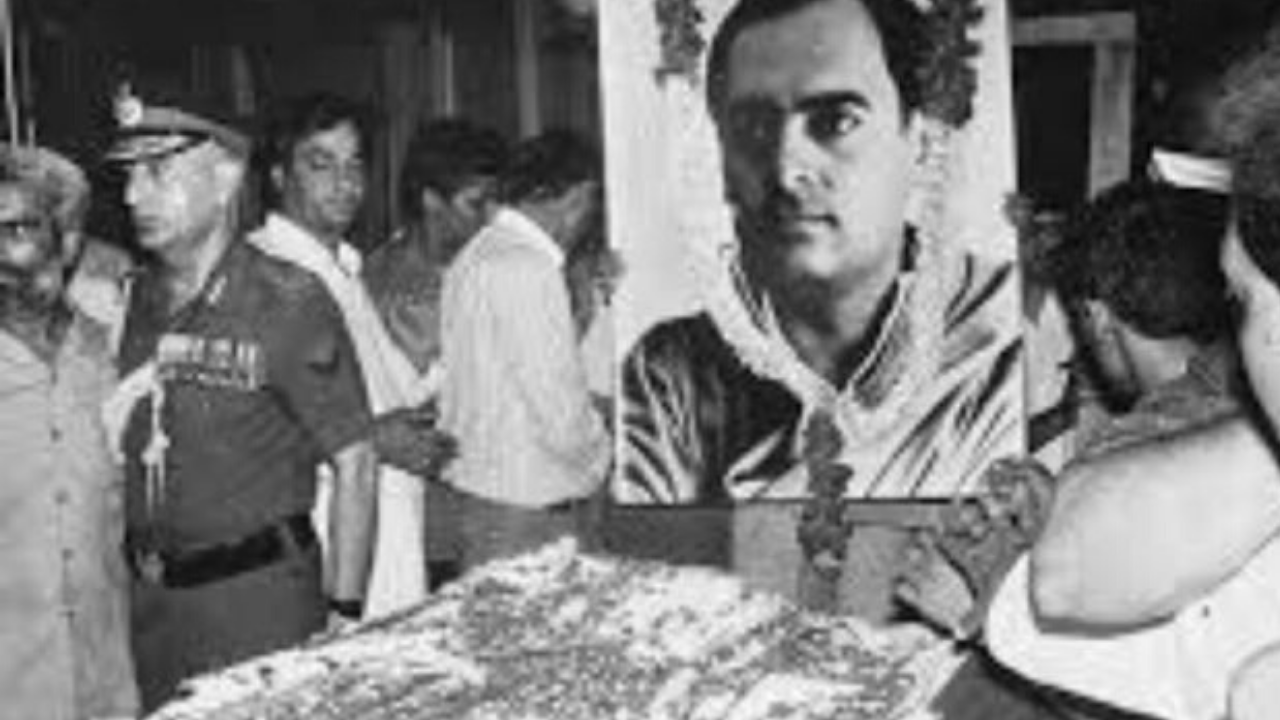 Yet another tragedy befalls upon the country as its people lose their Former Prime Minister, Rajiv Gandhi, to the same fate as his mother, Indira Gandhi – a brutal assassination.

Rajiv Gandhi had been campaigning for the upcoming elections. He had just finished addressing a mass gathering at Visakhapatnam and his next stop was at the temple grounds at Sriperumbudur in Tamil Nadu.

He left for Sriperumbudur within two hours of having reached Madras from his previous location. On the way he stopped at few other rallies, each for an extremely short span of time.

Upon reaching the temple grounds at Sriperumbudur, he was greeted by a crowd of people on his way to the dais for his speech. He walked through the crowd comprising of his admirers, followers, and a number of school children. Many came ahead to greet and garland him while there were others who were there to seek his blessings.

Amidst the crowd, a woman came forward – her hair adorned with jasmine flowers. The sub-inspector Anusuya who had been appointed to manage the crowd at the spot tried to push her away, but Gandhi objected and asked her to give everyone a chance.

She garlanded him and bent down to seek blessings from the Former Prime Minister. While doing so she detonated the RDX laden belt that she was wearing underneath her suit. The explosion killed an estimated 25 people who were within the immediate radius of the explosive, including Thenmozhi Rajaratnam aka Dhanu, the assassin.

Immediately after the assassination, Rajiv Gandhi’s mutilated body was flown back to New Delhi. There the body was handed over to the All India Institute Of Medical Sciences for autopsy and reconstruction of the body.

The state funeral was broadcast live, both nationally and globally. Dignitaries from around 60 countries attended the funeral. His cremation was done by the river Yamuna, at a spot nearby to his brother, mother, and grandfather’s cremation grounds.

A Complete Post-Mortem Of The Assassination

A civil war had been raging within Sri-Lanka since 1983 after decades of ethnic tension between the Sinhalese and the Tamils in the country. The Tamils were fighting for their right to establish a Tamil Eelam (independent state) within Sri Lanka.

Though it had started with random insurgencies and riots, the situation eventually culminated into a complete war. Indira Gandhi, the then Prime Minister of India, proposed to mediate a settlement between the two communities.

The Sri-Lankan government had declined the proposition, despite which, according to investigations conducted later, she continued to train Tamil guerillas in various camps in South India.

India’s relations with Sri-Lanka gradually continued deteriorating and finally in the year 1987 India launched Operation Poomalai, much to the dislike of either party engaged in the war. This was done under the direct orders of Rajiv Gandhi, who had been elected to fill in his mother’s shoes right after her assassination.

Though it had been initially decided that the Indian troops (IPKF) would not be intervening in any of the major operations as they were solely being sent as peacekeepers, they did end up participating in numerous large-scale military battles.

In 1990, after much chaos had already been caused by the launch of this operation on either side of the border, Sri-Lankan President Ranasinghe Premadasa forced India to summon their troops back.

The assassination was a careful execution of a plan that had been hatched over the span of a year. Vellupillai Prabhakaran, the then LTTE supremo was certain about Rajiv Gandhi being re-elected as the PM, the occurrence of which would confirm the re-induction of the IPKF as promised by Gandhi in one of his interviews with the Sunday Magazine.

Prabhakaran had mobilized a group of four of his trusted lieutenants at Jaffna to chalk out a plan and execute it. The team consisted of – Baby Subramaniyam, Muthuraja, Murugan, and Shivarasan.

As they went ahead with their plan of physically assassinating Rajiv Gandhi, they recruited more people according to their requirement, the last ones being Dhanu and Shubha – the suicide bombers from the Tamil Tiger Squad.

They had even recruited two photographers – Haribabu and Ravi Shankaran for filming the whole episode. The former’s footage had helped the police with their investigation later, though he too had passed away at the explosion.

After conducting a few dry-runs at some other political rallies, the team was ready for their final execution at the Sriperumbudur grounds.

Who Are Dhanu And Nalini?

Thenmozhi Rajaratnam aks Dhanu, was a female suicide bomber of the Tamil Tiger squad based in Sri-Lanka. Born in 1974, she belonged to a Hindu Tamil family and had joined the squad to contribute towards her community’s joint dream of establishing a Tami Eelam.

A martyr for her organization, she had blown up herself with 1.5 pounds of RDX explosives to execute Rajiv Gandhi’s assassination – a step that was essential on behalf of the LTTE to prevent the Indian intervention in the Sri-Lankan civil war.

The rest of the members of this plan had either died at the site of the explosion or committed suicide right after its execution.

Nalini Sriharan, who was recruited much later after the team had moved to Madras for the operation, had been arrested and she still continues to serve her period in jail for the last 28 years.

The site where the explosion had taken place has been demarcated by seven pillars and is referred to as the Rajiv Gandhi Memorial.

21st May has been marked as the National Anti-Terrorism Day since the occurrence of this brutally tragic event. It is observed to show respect to a celebrated politician and a former Prime Minister of our nation – to commemorate his death anniversary.

This day acts as a reminder for the constant repetition of such ruthless activities globally and the fact that we stand in solidarity to condemn them in respect of humanity – upholding the principles of an individual’s right to live.

In Pics: In Race For COVID-19 Cure, These Vaccines Have Reached Human Trials With Decent Success