Home Politics As A 19 YO, These Are My Reactions To The Manifesto Gimmicks... 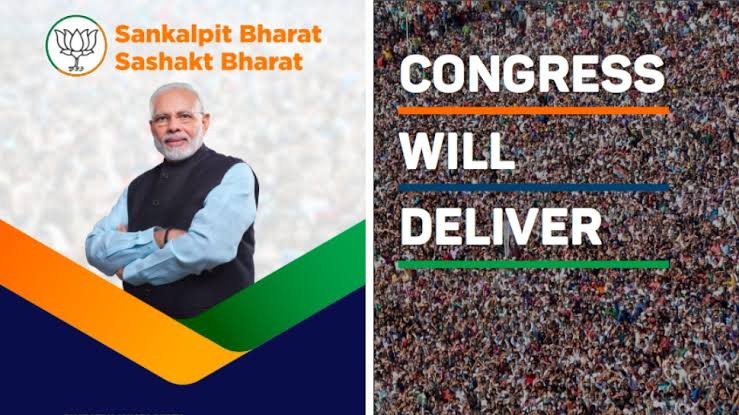 The absence of GoT for 18 months did not haunt me for I had Indian politics to fall back on and Indian journalism that garnished and served me the propaganda platter.

When five years of the daily dose of debates and ‘dharnas’ does not seem to be enough, our political parties drop manipulative bombs of manifestos before the elections.

Didi is not the one to forget after her much historic ‘Dharna’ against the Modi Government. TMC promised to restore the federal structure of the Constitution in the manifesto because who wants more power? Didi does.

With a new political chapter getting updated every hour, the manifestos were bound to reflect the political ideologies that the establishment and the opposition stuck on throughout the year.

The issues that have been landing up the BJP in a tough situation throughout its tenure have found its way in the manifestos of the opposition parties.

Congress used the sedition card and promised to “omit” Section 124A of the Indian Penal Code which has been misused by the government for years.

If my memory does not betray me then was it the UPA government that arrested a cartoonist on grounds or sedition? Just saying.

Another key feature of the Congress Manifesto was its promise to set up a “separate budget for farmers” on the lines of the Railway budget.

Critics believe it to be a better scheme for farmers than that is promised by BJP and looking at the number of farmers in Kisan Mukti March, it isn’t hard for us to believe the critics anyway.

Despite such schemes, Congress did not forget to include its favorite promise of waiving off the farm loans. Although we sincerely hope that this time it won’t wave off the loans like it promised to do in MP and Chattisgarh.

‘Sankalp Patra’ or ‘I’m too lazy too write another manifesto of BJP?’

Most political parties attacked the disturbing rate of unemployment and mob lynching cases that BJP was infamous for, but BJP showed a high level of optimism and yet again showed no sign of admittance even in their manifesto.

If Arun Jaitley is to be believed then BJP has apparently delivered in its term and hence he remarked, “Those who failed in the past for decades and not for years can manufacture fresh ideas in future but those who delivered in the past can have the credibility to offer a road map in the future.”

These schemes continued to be a part of BJP manifesto for years and have found their way again in 2019. Ram Mandir from ‘96 to ‘19 somehow always remains a constant though.

Honestly even Arnab Goswami is less repetitive when he asks “Modi vs who?” Besides, in January 2019, didn’t PM Modi himself said that the Government would wait for the court’s order?

Just when we had enough of BJP promoting and boasting through News Channels, Zee Network, petrol pumps, NaMo T-shirts and well NaMo Tv, BJP dropped its manifesto which yet again sounded more like those interviews where Modiji kept boasting about the BJP Government, topping it with a modest “waise toh main khud ke bare me bolta nahi”.

Elections are a Promise to the citizens or a race against Modi?

It seems like BJP forgot that a manifesto is supposed to be a prior commitment to the citizens rather than the script of the Modi Biopic.

Meanwhile, the opposition forgot that a manifesto should be focused on being pro- citizens rather than anti-Modi.

While the Nyay Scheme, Review of AFSPA, and spending of 6% GDP on Education seems to be some promising ideas for a manifesto, it is harder for people to believe that “Congress will deliver” owing to its history of corruption, inability to deliver in the past and how practically possible is it to get these promises implemented.

Back to the battle between Hindus and Minorities

BJP seems to be in a rough patch with its highly opposed Citizenship Amendment Bill and its decision to stick to it.

BJP simply chose to live in denial and stuck to address the same issues of National Security and the Hindu appeasement through Ram Mandir and additionally Sabarimala.

The opposition parties used this rhetoric to target and appease the minorities and make them believe they are there, YET AGAIN.

Long story short, the only ‘constant’ in your life is the loop of political appeasement through identity and religion politics; not your boyfriend.

As A First Time Voter Myself, Let Me Tell You Things To See Before Voting For Someone