Home Entertainment Are Indian Actors Brave Enough To Hear Their Hypocrisy Being Called Out... 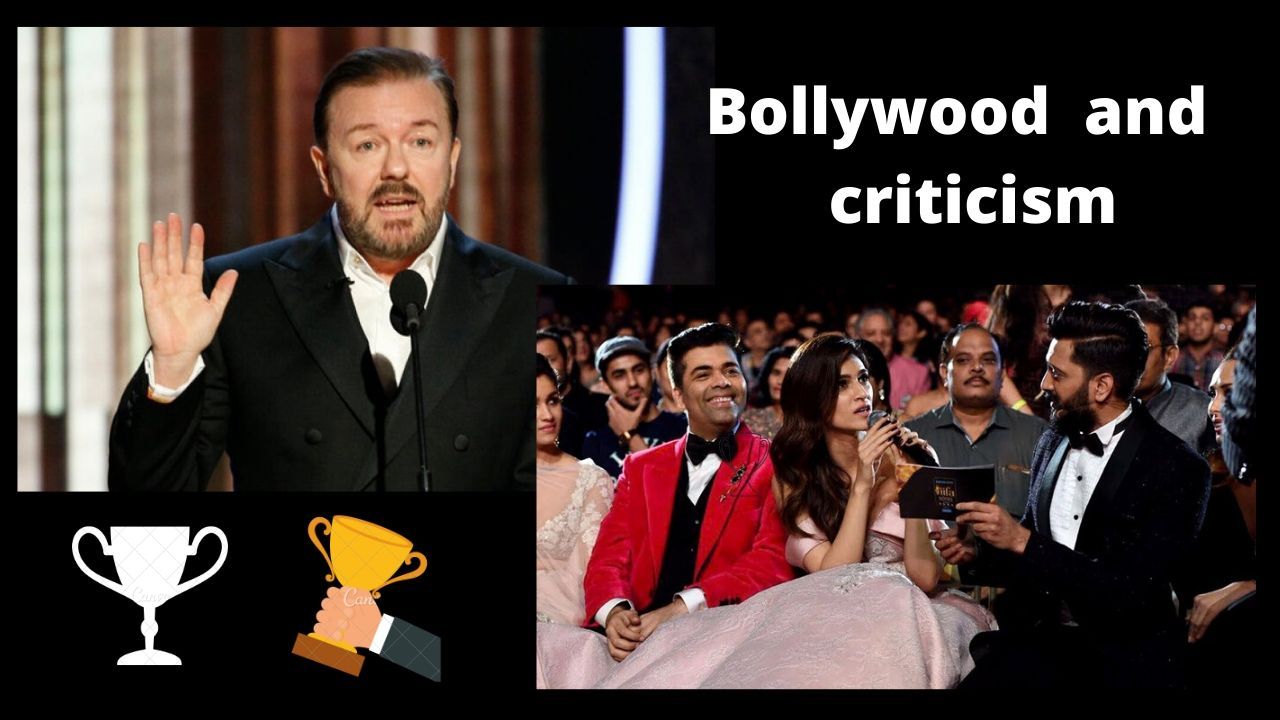 The 77th Golden Globes were held on 5th January and comedian Ricky Gervais was selected to host for the fifth time. Many people have complained about the show being too long and boring but Gervais’s humor kept everyone entertained.

He never holds back on calling out Hollywood for its hypocrisy. This year he commented that actors try to appear humanitarian but they have no problem working for AppleTV who own sweatshops in China. Tim Cook was in the audience and he looked mortified when Gervais made this joke.

Some Hollywood stars looked uncomfortable but refrained from making a scene. This made me wonder if Bollywood actors are capable of hearing their hypocrisy being called out on stage.

Bollywood’s History With Jokes And Criticism

Bollywood award functions are pretty lame. A lot of them seem like an extended version of ‘The Kapil Sharma Show’ where actors dress in women’s clothing and perform the same gags and jokes that the audience has heard a thousand times before.

But some actors cannot tolerate any jokes that are made at their expense.

The best example is, of course, Salman Khan who tried to end Arijit Singh’s career because he said that the award shows are too long. Later on, Salman Khan created an awkward scene when Mithoon tried to defend Arijit.

Then, there is Neil Nitin Mukesh who didn’t like it when Shahrukh Khan and Saif Ali Khan made fun of his name. The joke was bad but it was not that offensive that Neil should be so displeased by it.

Ashutosh Gowarikar started a verbal battle with Sajid Khan for making fun of Harman Baweja as he felt that if you ridicule artists and their crafts, then it defeats the purpose of the award shows.

KRK is known for trolling Bollywood celebrities but he didn’t like it when Ali Asgar tried to troll him with a ‘Balti Award’, and left the show in anger.

It’s safe to say that Bollywood artists with their inflated egos can’t stand any jokes that are made at their expense.

Things That Need To Be Called Out

Salman Khan openly bullies people so it would be interesting to see the situation when the tables are turned on him. There are countless memes and jokes about Bhai’s driving and shooting skills but the reaction would be different if the jokes are made on national television.

People worship Amitabh Bachchan but he was also named in the Panama Papers scandal which revealed how the rich and affluent people of the world use offshore firms to stash their wealth. Someone needs to call him out for his involvement in the scandal.

Gervais didn’t hold back any punches when he said that if ISIS ever starts making movies, Hollywood actors would probably call their agents for getting a role because they don’t care about morals and ethics.

Bollywood actors are always seen cozying up with politicians and business tycoons to maintain relationships with people in power. They pay no regard to how their policies hurt the common people and they deserve to be criticised for it.

Gervais joked that Leonardo DeCaprio’s movie ‘Once Upon A Time In Hollywood’ was so long that by the end of the movie his girlfriend became too old for him to date.

This trend of older men dating younger women has been existent in Bollywood movies for decades.

It’s creepy how so many actresses are paired up with middle-aged men who have probably known these actresses when these women were toddlers.

The recent Dabangg 3 featured a love story between 21 year old Saiee Manjrekar and the 54 years old Salman Khan. By romancing actresses half their age the ‘veteran’ actors want to maintain the mirage of a ‘youthful hero’.

5. Awarding Celebrities Because They Attended The Function

Recently a video of Alia Bhatt exiting with an award in her hand became viral because she left the ceremony before it began and it was clear that she showed up just to pick her award.

Award shows are notorious for awarding celebrities because they attended the show and their presence would bring the TRP.

There are countless things that Bollywood alumni are guilty of that need to be called out.

However, nobody wants to take Panga with them so Indian award shows are stuck with Whatsapp jokes and really irritating sucking up.