You would be among the rarest of the rare people if you haven’t watched Dharma-production’s Shershaah starring Kiara Advani and Siddharth Malhotra. It is based on the life of Martyred Captain Vikram Batra of the Indian Army. He gave his life fighting the Pakistani enemies in the 1999 Kargil war.

The romantic angle between Siddharth and Kiara was especially loved by people. How they engaged in romance keeping it from their families, how they made long-distance work, their marriage, and how Dimple (who inspired Kiara’s character) stayed single and unmarried after Vikram’s death.

The movie otherwise loved by most apparently has one particular man and his family in Kashmir in deep trouble.

Kashmiri Journalist’s Life In Threat Due To Shershaah?

Faraz Ashraf, a journalist from Kashmir, tweeted how this Bollywood blockbuster has put his life and that of his family in danger.

In the first half, they shoot a scene in which the terrorists are trying to get past a checkpoint guarded by the army. The car used by the militants has the same number on its license plate as Faraz’s car.

In the movie "Shershah" produced by @DharmaMovies @karanjohar have used my personal car registration number on the car which is being used by militants in the movie.@OmarAbdullah @AakashHassan @AzaanJavaid @Gaamuk pic.twitter.com/jOWeTyMhLO

As you can see in the picture posted by Faraz, the license plate number is exactly the same. He says that “they (Bollywood) have gone too far in attacking me and my family“.

“It is a threat to me and my family. I cannot travel in the car as feel safety concerns now due to the move. I have not given any permission to any production house to use the regd no. of my car,” he further wrote.

Given the sensitive nature of the matter in the valley, he has decided to pursue legal action against the filmmakers and requested the support of the media and people for the same. 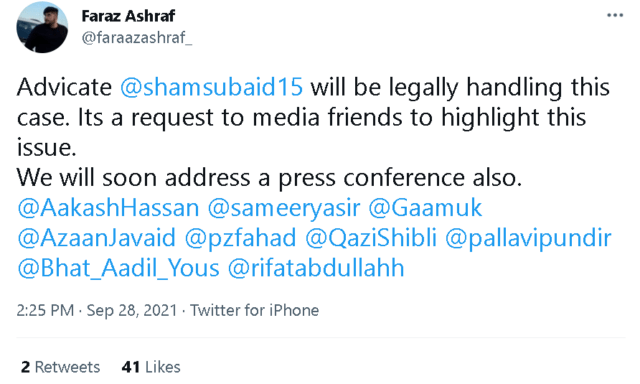 How this case unfolds is to be seen.

ED Originals Sai Soundarya - October 22, 2021
FlippED is an ED Original style wherein two bloggers come together to share their opposing or orthogonal perspectives on an interesting subject. A beauty pageant...