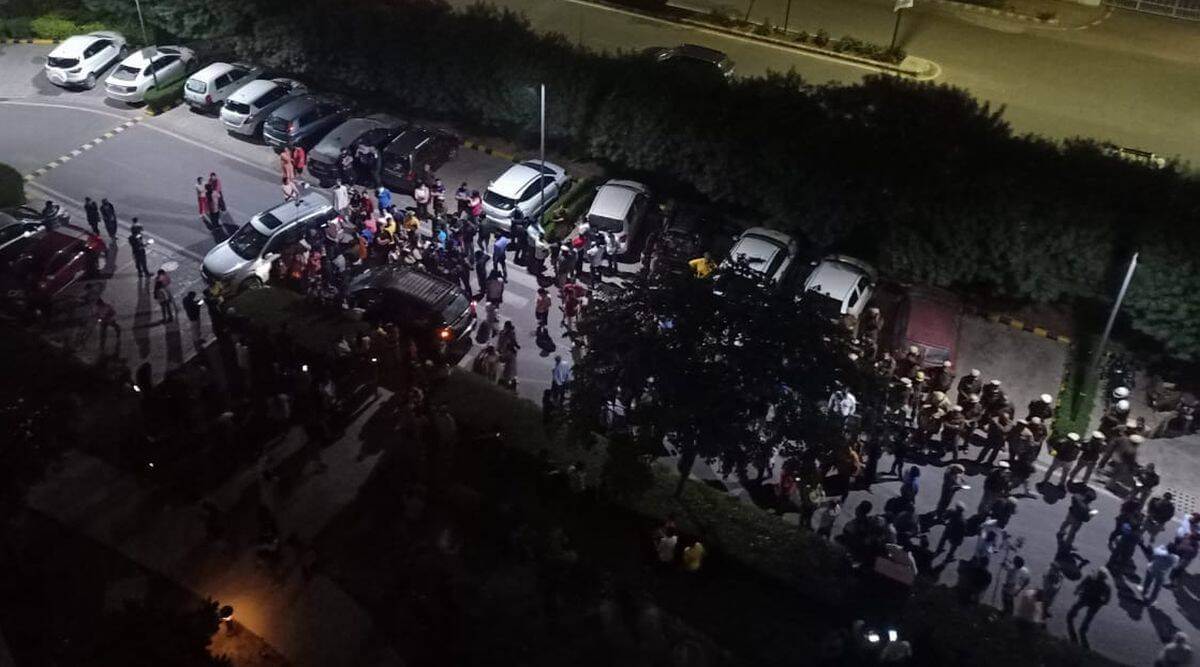 Stray dogs are nothing new for Indian streets, with every colony and society at least having 2-3 of them. This obviously brings about people who want to make life just a little bit easier for these animals who are living on the streets without food, water or any other luxuries.

However, there has been growing unrest among people, especially those in residential societies who oppose these actions and don’t want people on their street to feed stray dogs.

This escalated to quite a concerning level recently when a family in Gurgaon was surrounded by people of their residential complex and neighbours allegedly and blocked from entering the complex.

These people were angry with the family for feeding stray dogs of the area and there were alleged cases of dog-biting.

What Was The Matter?

The incident happened in the Vatika 21 housing society complex in Sector 83 of Gurugramon Monday night. A family of three that included a three-year-old daughter while returning to their home at night were surrounded and practically held hostage inside their car by residents of their complex.

Reports claim that these residents did so out of anger against the family feeding stray dogs inside the society compound. They alleged that these dogs were some kind of danger to the people and that some had even bitten a few children of the complex.

There doesn’t seem to be much proof to these accusations, however, and only is word of mouth.

In certain videos, the angry crowd can be heard shouting slogans like “Bahar nikalo kutte ko” (bring the dog out).

Subhash Boken, PRO of Gurgaon Police stated that, “A resident of that society is a dog lover and frequently feeds stray dogs in the area. A couple of days ago, one of the dogs bit another resident, because of which people were on edge. The resident, his wife, and his three-year-old child were returning home from outside on Monday night, when other people from the society surrounded their car and became aggressive.”

He further added that, “Since a crowd has gathered there, the ACP of the area is at the spot along with the SHO of multiple police stations in the vicinity. The residents do not appear to have become physically violent. They were aggressive but the situation is under control. Sufficient police force has been deployed…No case has been registered yet.”

For the record though, there is nothing illegal or wrong about feeding stray dogs in India. In 2011, the Delhi High Court had given clear guidelines for people wanting to feed stray dogs and even the Animal Welfare Board of India in 2014 had released a notice clearly stating that there is no law that forbids feeding street dogs food.

The AWBI circular stated that, “There is no law that prohibits the feeding of street animals. Citizens who choose to do so are in fact performing a duty cast upon them by the Constitution of India – of showing compassion to all living creatures. Various Courts, including High Courts, have upheld street dog feeding since the same reduces human-animal conflict and suspicion, and facilitates animal birth control (by making dog catching easier.”

Reports also state that in fact the beating and/or intimidation of stray dogs was the thing not allowed with the correct way to control their population was sterilizing stray dogs and then releasing them back on their original streets once the procedure is done.

Read More: Should Right To Pet Become A Fundamental Right?

A person by the name of Sumit Singla even posted a live Facebook video while he was stuck inside the car and how the residents around were behaving.

In this video, Singla can be heard saying that, “The only crime we have committed is feeding a dog, feeding an animal in need…they have managed to gather this massive crowd of 100 odd people and even the police are finding it hard to control them because these people are trying to smash into the car itself.”

Singla also alleged that this was caused by “RWA and various goons” and that these people were also trying to attack his three-year-old daughter while trying to break into the car.

In the video, Singla can also be heard saying that there were at least around 100 people surrounded the car.

This incident was also posted by people on social media, who called out the extreme reaction shown by residents for something as innocent as feeding a stray dog.

RWA at Vatika G21 Sector 83 terrorizing an innocent family including a 3 year old child for feeding a dog. They've been held hostage in their car for 2+ hours now due to violence and vandalism. Please help @Manekagandhibjp @gurgaonpolice pic.twitter.com/iWCgehzhfi

Residents of a society in Gurugram protesting against a family for feeding street dogs inside the society. They allege that dog bite incidents has increased in the society. Cops trying to control the situation. @ndtv@tweetndmc कृपया NDMC रिहायशी कंपलेक्स के लिए आदेश जारी करेंl pic.twitter.com/VsaY3XGFLj

Residents of a society in Gurugram protesting against a family for feeding street dogs inside the society. They allege that dog bite incidents has increased in the society. Cops trying to control the situation. @ndtv pic.twitter.com/1gx35PGI2T

Singer Mohit Chauhan also posted on his Twitter about how he has been feeding stray dogs for over 300+ days.

This is terribly disheartening to learn that a mere feeding of a stray animal can cause such a vicious and scary reaction from people.

Residents of residential society in sector 83 has made a family with 3 yrs old child hostage inside their car, deflated his car tyres, for feeding stray dog inside society. @gurgaonpolice struggling to calm down the crowd. @anilvijminister @DGPHaryana @ALOKMITTAL_IPS @mlkhattar