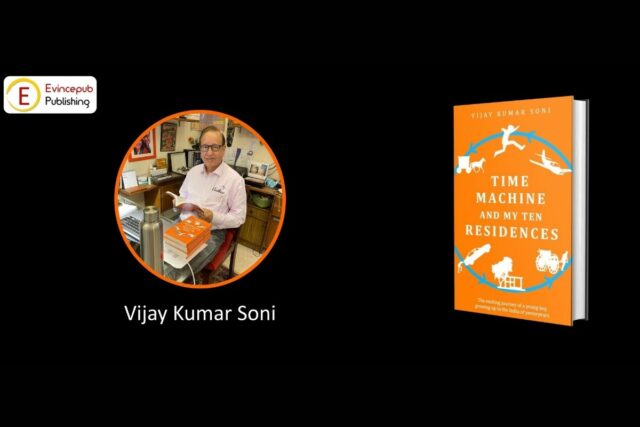 September 15: As a person’s life passes, it has a plethora of two things, mainly. One is the experiences they acquire. The second is the memories that they create in their lifetime. They may or may not want them to be a part of their lives, but there is no control over the human brain and forgetting them completely is less of a probability. However, on digging into this same box of memories, a person can find many such anecdotes that may not be a part of their routine memory. Vijay Kumar Soni, in his book, “Time Machine and My Ten Residences,” (https://www.amazon.in/dp/9354460216) published by Evincepub Publishing (www.evincepub.com), takes a plunge into the waters of his memory and brings such anecdotes which help the readers get acquainted with his life altogether.

Writing in the years when people generally look back to their lives and how eventful they have been, Soni’s “Time Machine and My Ten Residences” is more of a cornucopia of many things than just his life. He uses this exciting writing technique in snippets, which may not go for longer than one or two paragraphs. This technique, to a large extent, connects with the manner in which human memory operates where no one remembers the complete details of an event instead, the highlights. The events he talks about maybe whole or may not link with the question of why the author starts telling in the first place. This makes his work realistic, authentic, and factual in its sense. It proves that the events he remembers are purely raw information that his memory has produced and not a record from his daily diary or journal.

Alongside, the others features include the frequent drawing of the incidents in “Time Machine and My Ten Residences” and matching them up with the events at the national or global level. He does not do this tracing for every incident he narrates but now and then to remind the readers that there were a lot of things happening at different levels that were going parallel with his life. These events give a fair idea of how much the world has progressed since its earlier times and the long way India has come from its independence. All this makes the work a record or a document of history, a treasure for many readers. Alongside, this book is bound to make readers nostalgic and develop a desire to go back to the earlier times when there was no such technological boom and life was far simpler. The times when people were closer socially than virtually and, of course, when they were free to roam about instead of staying locked up in their homes like the present-day situations.

It is always said that gone times are the ones everyone remembers. It is merely due to the fact that the time gone would not come back, which makes this saying more powerful. Soni’s work is a potent reminder of this saying and may inspire the readers to want to make the best out of the times they are going through. “Time Machine and My Ten Residences” would catch the interest of both young and grown-up readers in no time. The young readers would feel interested since the book would sound like a series of incidents being narrated by an elder to help them understand the earlier times. At the same time, the historical events and happenings find mention, which also refreshes or updates their knowledge. The grown-up readers would find the work attractive due to the plethora of incidents it contains, making them nostalgic and reminding them of the gone times.

Soni’s unique technique to narrate the incidents of his life is also another attraction of his book. Publisher Vikram Singh Thakur says that the innovation he has tried for once may seem different and one of a kind, but it bears the impressions of a person’s memory in the real sense. On pondering over the usage of this technique, the readers would agree that this is how the mind actually works, and they are effortlessly convinced of its authenticity. Simultaneously, he more or less follows the chronological format in “Time Machine and My Ten Residences,” which also helps make the work easy to understand for the readers. The rest of the work is done by the attractive cover, which shows life in a circle. This is symbolic of how life for everyone is more or less, and also how different incidents leave lasting impressions on a person’s mind. Therefore, every reader should try reading this book, not just to hear the stories of a person’s life but also the technique he uses to narrate them and also to relate them with events at the national and international level.