Home Lifestyle 6 Places In India That Glow In The Dark 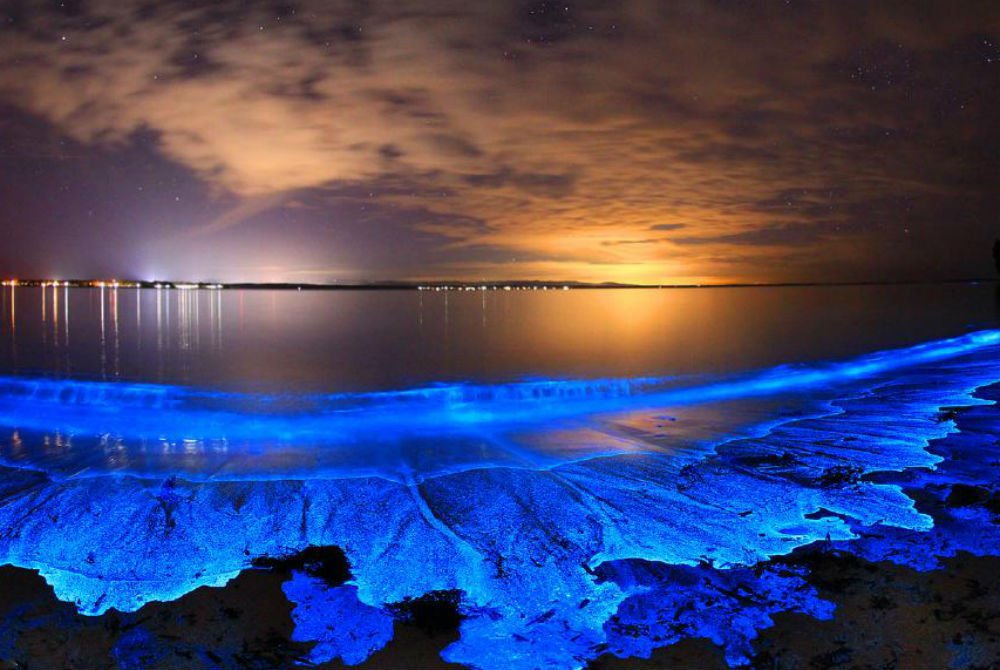 Bioluminescence is the emission of light by bacteria, fungi, algae, insects and aquatic animals such as jellyfish. Bioluminescence occurs widely in marine vertebrates and invertebrates, as well as in some fungi, microorganisms including some bioluminescent bacteria, and terrestrial arthropods such as fireflies.

Bioluminescence occurs through a chemical reaction that produces light energy within an organism’s body. For a reaction to occur, a species must contain luciferin, a molecule that, when it reacts with oxygen, produces light.

However, one does not have to travel too far to witness this fascinating phenomenon. Here is a list of 6 places in India that quite literally glow in the dark!

Located in the Arabian Sea, Bangaram is a tiny teardrop-shaped island and is a part of the Lakshadweep cluster of islands. Being the only uninhabited island resort in Lakshadweep, Banagram has got its own charm.

The most fascinating feature of this island which attracts tourists all over the world is the bluish-white glow that the sea waves start emitting during nightfall. The waves sweeping up the shore glow with an iridescent bluish light as a result of the phytoplankton, algae and other aquatic creatures such as jellyfish in the waters.

An ideal destination for a peaceful get away, Banagram has made its mark on the international tourist map.

Purushwadi is a tribal village in Akole Taluka, Ahmednagar District in Maharashtra.

The village attracts millions of fireflies and thousands of tourists every summer. During their breeding season, fireflies produce bioluminescence at twilight to attract mates.

The fireflies disperse light to attract the opposite sex. Male fireflies send signals in the form of distinct patterns of flashing light and females respond to them in their own way of signaling. The exchange of light creates a spellbinding phenomenon for the onlookers. The flies live long enough to mate and lay eggs and eventually they die.

Every year, in the month of June, a Firefly Festival is held in the woods of Purushwadi to let the tourists witness the beauty of these fireflies in all their dazzling glory.

Read More: The Grim History Behind World’s Best Country Of 2021

The Mhadei Wildlife Sanctuary is a protected area in the Indian state of Goa in the Western Ghats of South India. It is located in the North Goa District, Sattari taluka near the town of Valpoi and is also home to Bengal Tigers.

The area of the sanctuary is thickly forested with moist deciduous vegetation and some evergreen species too. The sanctuary is particularly well-known for its sacred groves that protect rare and indigenous trees like peculiar saffron coloured flowers.

However, the fascinating part about the sanctuary is that it is filled with something known as the mycena genus fungi or bioluminescent mushrooms. The mushroom can be spotted by the faint greenish-yellow or violet light they emit from their mycelium and fruiting bodies. While walking in the night, it looks like a warm glow.

Located in Karnataka, Mattu Beach is a very secluded beach right by the scenic route from Kaup to Malpe. With a pristine beach and cool palm trees, Mattu Beach is a hidden paradise. However, at night, the beach has a different glow up altogether.

The sea is lit up as a mesmerizing blue on every wave as a result of bioluminescence caused by microorganisms which are called Noctiluca scintillans. Commonly, it’s known as the sea sparkle, which is a free-living, marine-dwelling species that emit light when disturbed.

West Jaintia Hills District is the home of one of the major tribes of Meghalaya popularly known as the ‘Jaintias’ or the ‘Pnars’ and other sub tribes like the wars, the ‘Bhois’ and the ‘Biates’. Like the Khasis, the Jaintias are believed to be remnants of the first Mongolian overflow into India.

However, as intriguing as the culture in the Hills is, what’s fascinating about this place is the presence of ‘electric mushrooms.’ The stalks of the mushrooms were so bright at night that the locals began using them as natural torches.

This mushroom was only found growing on dead bamboo and is known as Roridomyces phyllostachydis.

Located between Colva Beach and Majorda Beach in Goa, Betalbatim Beach is a pristine place with golden sand spread all across the coastline.

Offering majestic views of sunrises and sunsets along with dolphins here and there, the beach is best known as the glowing beach of Goa for the presence of bioluminescent algae in its waters that illuminates the shoreline at night.

Yes, India truly is a land of mysteries that never ceases to tickle our fancy. From architectures that leave a person awestruck to breath-taking natural phenomena, very few can resist the charm of India.