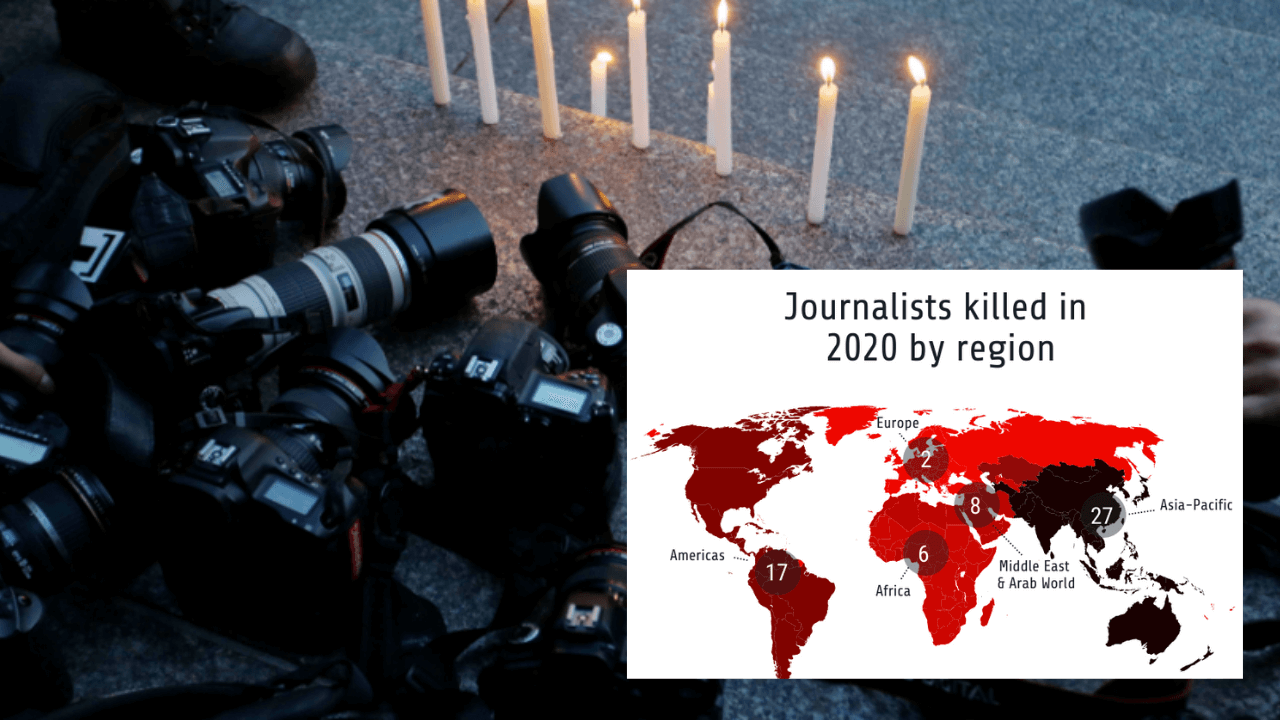 Reporters Without Borders (RSF) recorded that a total of 50 journalists were killed worldwide in 2020 in their second part of the annual round-up of abusive treatment and violence against journalists that they shared with the world on the 29th of December.

Even the numbers alone are disheartening but another uneasy thing to note is that the number of journalists being killed in countries that are not at war is more than the number of media workers killed in worn-torn lands.

RSF has been compiling annual data on violence against journalists around the world since 1995.

According to RSF’s tallies, there were 50 cases of journalists killed in connection with their work from 1 January to 15 December 2020, in 2019 the tally was 53.

More than two-thirds of the killings of journalists and media workers happened in countries that are supposedly ‘at peace’.

According to reports, in 2016, 58% of media killings took place in areas with an ongoing war.

In contrast to that, this year only 32% of the fatalities were reported from areas in a war like Syria and Yemen, or lesser intensity conflicts like Afghanistan and Iraq.

The countries ‘at peace’ where the highest numbers of journalists killed were recorded are Mexico, India, the Philippines, and Honduras.

Pauline Ades-Mevel, RSF editor-in-chief said, “For several years now, Reporters Without Borders has noted that investigative journalists are really in the crosshairs of states, or cartels.”

The figures showed that 84% were intentionally targeted and murdered, as opposed to 63% in 2019.

The final top 5 countries that proved to be the deadliest this year for journalists, with or without war, are Mexico (8 killings), Iraq (6 killings), and Afghanistan (5 killings) followed by India and Pakistan with 4 killings each.

RSF recorded a total of eight journalists killed in Mexico, making it the deadliest country for reporters. “Links between drug traffickers and politicians remain, and journalists who dare to cover these or related issues continue to be the targets of barbaric murders,” said the report.

It was recorded that four journalists were killed in India in 2020 due to their careers.

“In Mexico, Julio Valdivia Rodríguez, a reporter for the daily El Mundo, was found beheaded in the eastern state of Veracruz, while Víctor Fernando Álvarez Chávez, the editor of the local news website Punto x Punto Noticias, was cut to pieces in the western city of Acapulco.

In India, Rakesh “Nirbhik” Singh, a reporter for the Rashtriya Swaroop newspaper, was burned alive in December after being doused with a highly flammable, alcohol-based hand sanitiser in his home in the northern state of Uttar Pradesh by men sent by a local official whose corrupt practices he had criticised, while Isravel Moses, a TV reporter in the southeastern state of Tamil Nadu, was hacked to death with machetes,” said the report published by RSF.

Three journalists were killed by a shot to the head by unidentified shooters in Iraq while covering protests. Another one was killed while trying to flee from the violence that erupted between security forces and protestors.

There were some other countries, like Iran, where the state itself prosecuted journalists and ordered their execution.

“Rouhollah Zam, the editor of the Amadnews website and Telegram news channel, was hanged after being sentenced to death in an unfair trial. Although executions are common in Iran, it was the first time in 30 years that a journalist has been subjected to this archaic and barbaric practice.”

In Nigeria, it was noted that two journalists were killed by the violence during protests against the brutality of the police unit.

In Colombia, a reporter was shot while covering the protest against the privatization of local land.

Also Read: What’s It Like To Be A Journalist In India?

Other Forms of Violence Against Media Workers

In the annual round-up of the year 2020, RSF found that there were 387 journalists who were either detained, held hostage, or went missing to be never found again.

The numbers for detained journalists is the same as in 2019, which throws light on the urgency to act against the high level of the unfair and brutal manner in which journalists are being treated.

In the ruse of the global pandemic, there was a fourfold increase in the arresting of journalists, even women journalists were detained 35% more than before.

The data shared by RSF is heart-wrenching and scary.

Journalistic work in war-torn areas and conflicted spaces is dangerous and can lead to serious damages or as we noted, even deaths.

But the other ways of silencing the media, through the means of violence, institutionalized punishments, etc. which saw an increase this year, reflects the kind of world this has become.

Information is being manipulated, the voices of truth are being silenced. The government everywhere, instead of providing protection to the media, is manipulating it according to its wishes.

“Some may think that journalists are just the victims of the risks of their profession, but journalists are increasingly targeted when they investigate or cover sensitive subjects. What is being attacked is the right to be informed, which is everyone’s right.”