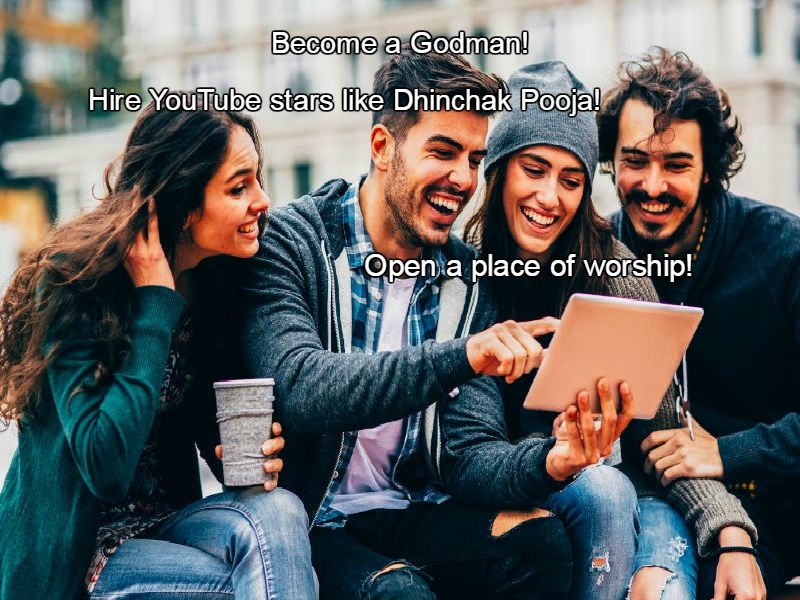 Your average Joe retirement plans need to go back to the 70’s because that’s where they belong.

What our generation needs is a spiced up package which guarantees minimal investment and promises a solid return, enough to make a substantial profit and spoil yourself as you lose your teeth for the 2nd time.

But trust me when I say this, you don’t need a life insurance agency to tell you what to because we at ED Times have got you covered with the most full-proof contingency plans to give you an exorbitantly high monetary advantage in old age.

So without further ado, let’s look at some of the most interesting retirement plans which the Indians can take up other than the typical ones:

Open up an Ashram, grow your hair long, wear white (or saffron, if you know what I mean) clothes, preach that you just had an epiphany that God wants you to be his (or her) messenger and get ready to have a million people screaming your name as you sing and dance on stage sporting a ridiculous outfit and making songs as inspirational as “Love Charger”.

Don’t want to be a Godman? Become a Yoga guru.

Time taking process but who knows if you might strike gold and become an Ayurvedic brand mogul and sit atop an empire of over Rs. 10,000 crore?

Investment: Rent a small place costing about 10,000 per month.

Return: Followers donation should see you sitting in a mansion in a year, a movie deal in 2 and a virtually never ending bank balance.

#2. Open A Temple Or A Holy Place Of Worship:

One room or a small sculpted rock which looks natural enough to resemble a God’s image and voila, my child! You’ve now successfully monetized faith and religion like an average Indian religion propaganda executive. You go, modern capitalist!

Prey on the faith of the poor and rich and in about 2 years, you should be a functioning organization which talks in nothing but the language of crores.

Investment: A small room, a rock and a few things to decorate and make the place look religious. #3. Apply To Be A Part Of The Censor Board Jury:

Most of the jumped up and hormonally imbalanced feminazis are going to transform into grumpy aunty jis and the ever-so-magnanimous sex-deprived male generation of our country are going to become perverted uncle jis.

What better retirement plans for these cuckoos other than the ones which involve robbing people off of their cinematic liberty? Become the next Pahlaj Nihalalni and BAN EVERY F**KING THING.

Investment: NONE. Just be a movie buff!

Return: High amounts of bribe to get a certificate of approval and TV footage. Be famous, you grumpy douchebags.

Also Read: Personal Loans And When/Why They Might Be Necessary (Okay, this isn’t a mock link like this article, I swear.)

#4. Recruit Bad Singers And Launch Them As YouTube Stars:

Retirement plans involving talent recruitment and management are the best because you only put in minimal effort to do any work except using your internet connection to put up YouTube videos.

Omprakash Mehra, Dhinchak Pooja and a lot more people have made it big via YouTube by propagating the youth’s mindset which are about seducing older women, objectifying their bodies and in a less harmless manner, taking selfies and binge drinking.

RECRUIT SUCH PEOPLE to further poison the essence of music and make profit out of the people’s musical misery.

Return: YouTube stars pay their managers from royalty. Get ready to cash some heavy cheques!

Because that’s the safest type of comedian. Nobody gets offended. Safe zone, touch down.

Instead of hiring YouTube stars, become one yourself. Crack lame feminist jokes like Aditi Mittal, launch a collaboration video with All India Bakchod talking about female objectification whilst acting like a victim of nepotism and misogyny.

Your YouTube videos and a good PR campaign shall see you making a chunk of moey every other day, further giving you a celebrity status at YouTube Fan Fest and other random shows to make untalented people like Bhuvan Bam feel better about themselves.

Congratulations and welcome to the club!

Investment: Hire a PR agent and get a script writer for feminist jokes.

Annnnnnnnd there you have it. That’s all for today, folks. Told you this won’t be your average Joe retirement plans list which puts you on a stupid pension till you die.

We gave you plans to spice up your old age and in return, my comments section is open to you for your remarks. Cheers!

Should I Move Out? The Age Old Dilemma Fights Itself Out