Home Politics Why Is #TooMuchDemocracy Trending In India Today? 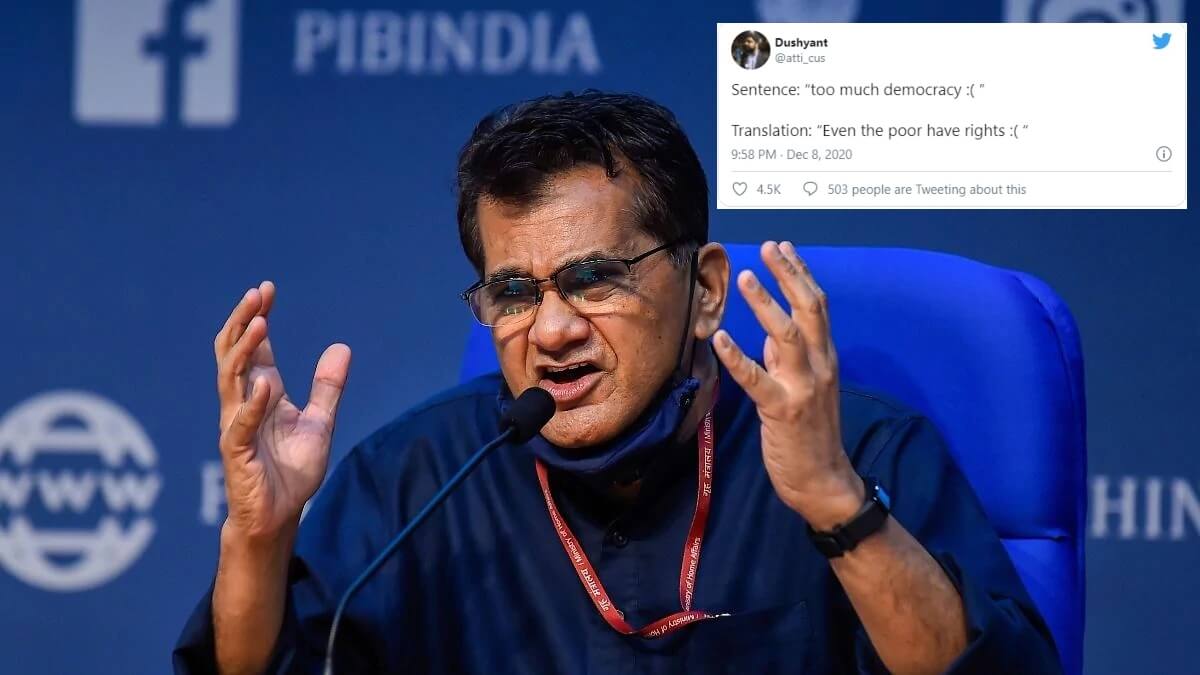 While we have had politicians blame everything from chowmein to other random things in our daily life on anything wrong going on in our country, another name has joined this list now.

Earlier, it was our Finance Minister Ms. Nirmala Sitharaman who had stated that the low revenue from the automobile industry was because millennials were not buying cars.

As per Ms. Sitharaman, the sale of cars was going down because millennials were using more Olas and Ubers and not buying an individual car for themselves.

Post this, the Twitterati started to trend #BoycottMillennials to joke about the absurdity of the statement. Now, something similar has happened with the recent statement made by NITI Aayog CEO Amitabh Kant.

His words eventually resulted in many people starting to trend #TooMuchDemocracy on the social media platform.

What Happened With Amitabh Kant?

Mr. Amitabh Kant is the CEO of the National Institution for Transforming India or NITI Aayog, a policy think tank by the Indian government.

Kant was recently speaking at a virtual event called ‘The Road to Atmanirbhar Bharat’ organised by Swarajya magazine.

As per reports, Kant was speaking about how India needs more reforms, especially in the logistics and power sectors, so that India can actually compete with China on a manufacturing level.

The question asked of him was whether the COVID-19 pandemic can be a possibility for India to establish themselves in the manufacturing industry.

To this, the NITI Aayog CEO said, “So tough reforms are very difficult in the Indian context, we are too much of a democracy. For the first time, the government has had the courage and the determination to carry out very hard-headed reforms across sectors… mining, coal, labour, agriculture… these are very, very difficult reforms… You needed a huge amount of political determination and administrative will to carry out these reforms which are being done.”

CEO of Niti Aayog, Amitabh Kant says: We have too much democracy! Hard reforms like mining & farm reforms can't be pushed through with this. Later while facing flak, he denied having said this! The Godi media withdrew that statement of his, but they forgot to delete this video! pic.twitter.com/JA5EVasErg

He even spoke about the recent protests being carried out by farmers against the agricultural laws. Kant stated that “Agriculture must get reforms. It’s very important to understand this, that the present reforms, nobody is saying that we do away with the mandis, the mandis will exist, the MSP will be there. But (a) farmer gets alternate choices (to sell his crop). I am a great believer that the farmer must have a choice. Why should we force (him) to only go to one place, we give you opportunity to go to five other places. Somebody gives you more than the MSP, why should the farmer not get it? That is the objective of the reforms.”

However, Kant opted out of commenting on the demand made by farmers to guarantee an MSP (minimum support prices) saying that this is something to be discussed between the government and farmers only.

Kant also praised the Indian central government a lot saying that, “But… this government has at least demonstrated its political will to do hard-headed reforms. And we need to see them through to become a major manufacturing nation. It is not easy to compete with China. It is not easy to become a manufacturing nation. It doesn’t happen out of holding seminars and webinars. It requires a very hard-headed, ground-level approach, which is being attempted for the first time in India.”

Twitter’s Reaction To This

Instantly after this, Twitter got to work and started to trend #TooMuchDemocracy which has almost 26,000 tweets to it.

People are making everything from confused posts about what democracy has to do with the progress of a country to memes about how ridiculous the statement sounds.

What do you think, is the current state of our country the way it is because we really do have too much democracy? Could Mr. Kant have worded his statement better in order to not say something so silly?