It seems that it has become common nowadays to just blame the millennials for any and everything bad happening in the world.

And now it seems that even the recent economic crisis in the automobile sector that India is experiencing is caused by millennials according to Finance Minister Nirmala Sitharaman.

But incidentally ED had already predicted this fact here and even listed out why exactly this was so, even before our dear FM said it out loud. 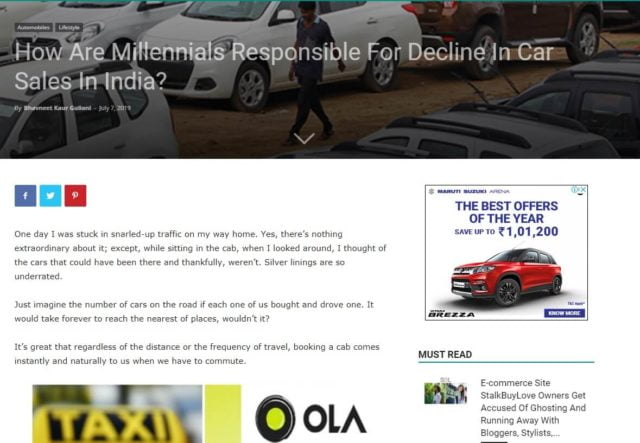 What Did Ms. Sitharaman Say?

On Tuesday, Nirmala Sitharaman at a press conference in Chennai addressing the NDA government completing 100 days in the second term, said how the recent slowdown in the Indian automobile sector is due to millennials.

According to ANI she said that,

“Automobile industry is now affected by BS6 and the mindset of millennials, who now prefer to have Ola or Uber rather than committing to buying an automobile.”

Basically the worst ever drop in the auto sector in the last two decades is purely because millennials are not buying individual cars and using cabs to commute.

This is coming in light of how recently Maruti Suzuki had to shutdown their manufacturing operations in Manesar and Gurugram due to the slowdown in the auto industry.

Not just that but the month of August also saw the worst monthly decline with a fall of 31.57% year-on-year to 196,524 units in domestic sales of passenger vehicles according to Society of Indian Automobile Manufacturers (SIAM).

Apparently this is the worst decline ever since SIAM started recording data in 1997-98.

Indian millennials on Twitter have not taken to these comments very well and are full on roasting not only Sitharaman but also themselves.

They are making memes and jokes on how other problems in the country are also because of them, with #BoycottMillennials trending on social media.

#BoycottMillennials as they are preferring live-in relationships instead of marriages.
Result: brahmins, pandits and jyotish, are becoming jobless.

The millennials have got no chill, so icecream industry is crashing. #BoycottMillennials

Instead of boycotting all the things millennials like, in succession, let's boycott the whole generation.#BoycottMillennials #SayItLikeNirmalaTai pic.twitter.com/IaiQ0CXNNn

Airline industry is in recession because millennials are preferring Skype and Whatsapp video call over personal visits.#BoycottMillennials

Blo0dy millennials crashing the economy! Soldiers are sacrificing so much, Can’t you buy cars for the nation? Anti nationals #NirmalaSitharaman

Nirmala Sitharaman: People prefer to have Ola or Uber rather than buying a car That’s why there is low demand of automobile.

What Do I Think As A Millennial?

Taking all this in, according to Ms. Sitharaman I’m the very cause that this crisis in the auto sector is happening.

I have a few queries that I would like answered considering such a big blame is being put on my tiny shoulders.

#1. Why Are Ola/Uber Not Rolling In Money?

Interestingly though as much as Ms. Sitharaman is saying that using more of Ola and Uber is causing the decline, even these cab companies are not profiting as much as you would believe.

Incidentally, these companies should be rolling in money with the increase of usage and paying passengers. However, that is not so as their growth rate has increased by only 4% in the last 6 months.

As per a report by Economic Times the number of daily rides has gone up to just 3.65 million from 3.5 million, which is not that large of a number.

The report also stated how both Ola and Uber have seen decline in their business with 2018 only seeing growth of 20%. This is glaring in comparison to how growth was at a massive 90% in 2016. 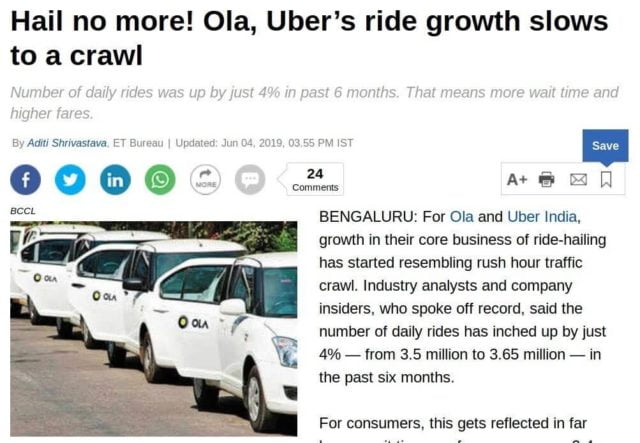 #2. Commercial Sale Of Vehicles Should Go Up

If more and more people are using cabs then shouldn’t the sale of commercial vehicles have gone up instead?

That is not the case though with ANI reporting that commercial vehicles sale has gone down to 38.71% in August to just 51,897 units.

#3. Should We Save Earth Or Pay Hefty EMIs?

The statement is also in direct contradiction to what the government itself and major environment organisations have been telling the recent generations.

That is to reduce the number of cars on the road to combat rising pollution.

So on one side we are being told to carpool, use public transport and such to make sure that air, noise and road pollution goes down and we can save our Earth. And then on the other side, millennials are essentially being blamed for a decline in the automobile sector because they are not buying cars.

Do tell me why would a young millennial who has only just started to work buy an expensive (even 1 lakh is expensive to some) car and then just let it sit there, not use it because… logic?

This is also ignoring the fact that land space is constantly reducing in the city and one family is nowadays just having 1 car since they don’t really have the space to park multiple cars.

Her statements are even more ridiculous when you realise that even the chairman of Maruti, R C Bhargava does not agree with it.

As reported by TOI, he said that “paralysis of decision-making” in banking sector along with more safety features becoming mandatory like air bags etc. have only resulted in the cost of cars going up.

This in turn has made entry-level four wheelers unaffordable for common man.

He even went ahead to say that it is not over-use of Ola and Uber but the higher taxes on petrol and diesel along with ‘upward revision in road and registration charges by state governments’ that have made buying a car difficult.