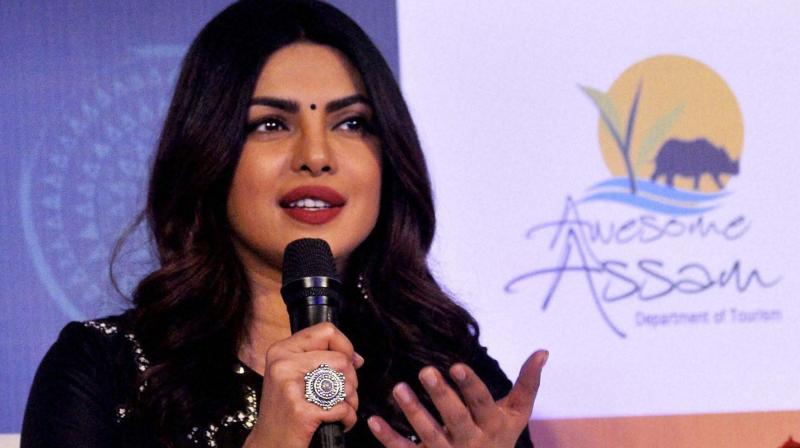 While Priyanka Chopra has still not been able to get out of the Nirav Modi controversy, seeking legal opinion to cancel her deal, she has invited yet another hassle, again for being a brand ambassador.

Seems like controversies spurring from the eastern state are not leaving the Mary Kom actress very easily.

Last year she was under scrutiny for being silent on the devastating floods that hit the state that she promotes and also calling Sikkim ‘insurgency hit’, this time over it is her picture in the Assam Tourism calendar that has created havoc among the opposition party in Assam.

The calendar recently launched by the Assam Tourism Development Corporation has Priyanka Chopra wearing western clothing and this has not gone down too well with Congress leaders.

During the Assembly session, Boko MLA Nandita Das and MLA Rupjyoti Kurmi initiated the matter and along with other Congress leaders demanded the removal of Priyanka as the brand ambassador of Assam, alleging that the pictures of the actress in ‘minimal clothes’ have dishonored the culture of the state.

“The government should preserve the respect of the Assamese society. Frock is not an Assamese attire and the calendar pictures were not sober at all. The government should have known how to preserve the prestige of the Assamese society, instead, they could have used the traditional mekhela chador. This is the reason we have protested against the calendar,” said Kurmi.

She also added, “There are a lot of talented Assamese actors, the government should look into this and accordingly appoint one.” Also read: How (Not) To Be an Indian Woman: Battling The Paradoxes Of Patriarchy Since Forever

Assam Tourism comes out in support of the actress

While the actress is being criticised for her choice of clothes the Assam Tourism Development Corporation stands in support of her.

Chairman of ATDC, Jayanta Malla Baruah told a local newsweekly, “The calendar was made to promote Assam internationally. It has also been sent to prominent international tour operators and dignitaries.”

“Priyanka Chopra is an international figure and her presentation in the calendar has not diminished Assam’s culture in any way,” he added.

The ATDC claims that there is nothing objectionable about the picture that could have sullied the Assamese culture.

Is this schooling of ‘no-show’ unnecessary?

Remember last year some people schooled Priyanka Chopra about Indian culture when she met the Prime Minister in western clothes. She was harshly trolled for ‘showing her legs’ in front of the P.M. What is even more problematic is when big media houses choose to ignore the effect they can have on the masses while promoting some news.

For instance, India Today, Deccan Chronicle and DNA India all chose to show a clickbaity image of Priyanka Chopra where her cleavage is prominently shown, which is nothing close to the image in the calendar. This not just gives out the wrong image about whatever news they are trying to sell but is also a cheap attempt on the part of the newspaper agencies, just to garner more attention.

What news, after all, are they trying to convey? The matter about an actress’s cleavage or some political leaders claiming indecency over a photo?

And remember, this blue picture was not even in the calendar!

What is the role of a tourism ambassador?

Also though a traditional attire could have served a better rationale behind the state’s customs and way of life, a frock cannot demean or disgrace the state.

Knowledge, skill, awareness, communication, talent, and creativity are perhaps the key elements of being a good tourism ambassador. To be able to attract people to the culture of a state.

Whether or not someone wants to embody the culture as a whole remains their choice, their job is to show people what the place’s rich culture is about and that can be done by way of awareness alone, how a cleavage can come in the way is something to wonder about.