Home Sports What Is Olympic Gold Medalist Neeraj Chopra Ranting About; And We Agree... 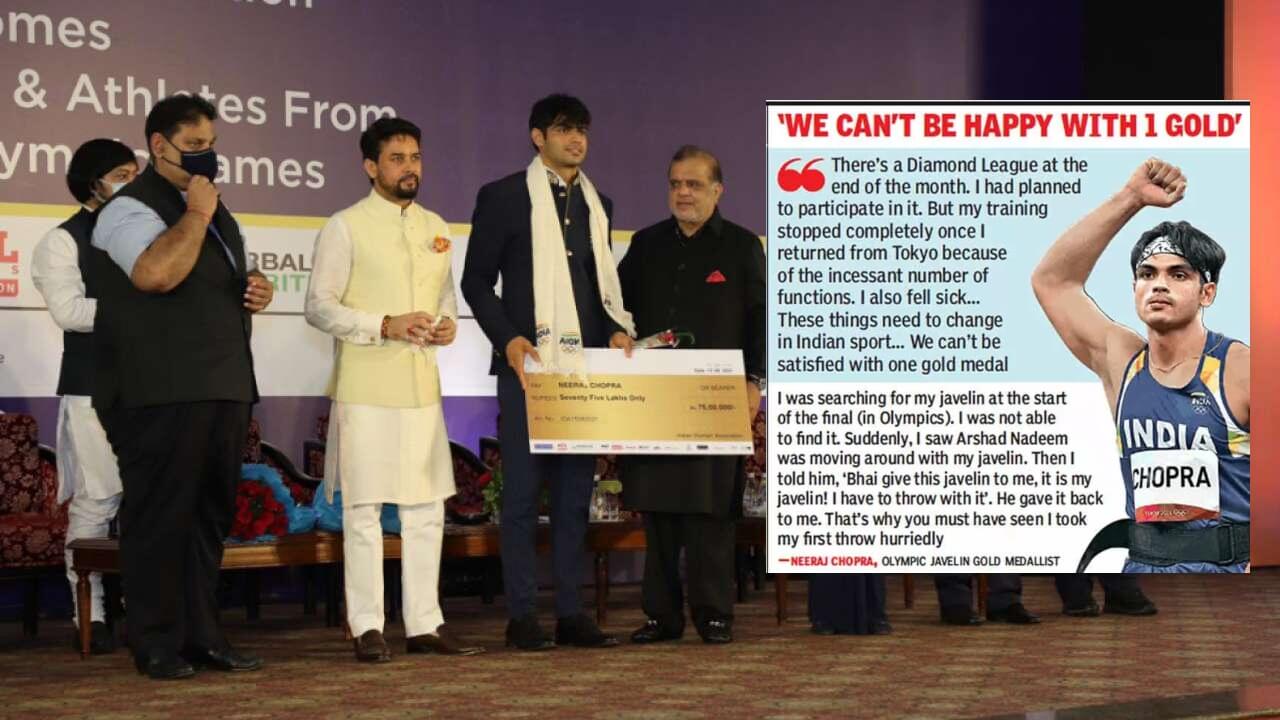 Neeraj Chopra is a name that has been splashed across literally every medium imaginable by this point. Even a person who is living under a rock or in a cave would know who Chopra is, since, from the time he made the winning throw, he has been constantly on our news channels, newspapers, social media and more.

This much media coverage is, albeit not without cause, as the 23-year-old athlete did win India its first Gold medal at the recently concluded Tokyo 2020 Olympics and brought much pride to the country as a whole.

However, at some point, one could think that it’s getting a bit overwhelming and apparently as per a recent interview Neeraj Chopra also thinks along the same lines.

Chopra has given comments on how because of the endless social events and appearances he has hardly had time to train and beyond that even give enough time to his own health.

What Is Neeraj Chopra Talking About?

Neeraj Chopra has been involved in a plethora of interviews and public appearances since he won the Gold medal at the Tokyo Olympics for javelin throw, an almost historic achievement for the sportsman and the country he represents.

From the cringey interviews that just focus on asinine questions to getting felicitated by a number of different politicians, authority figures, and other important people, he has been everywhere all at once.

However, he truly lets out his feelings in a Times Of India interview on the toll this all is taking on him and more than that how this is not the right attitude towards sportspeople at all.

In one answer he revealed that he has constantly been attending Zoom meetings from the time he won gold in Tokyo. In another, he also talked about how all the travelling and changing temperatures from venue halls to A/C cars led to him falling sick. He said “I had fever. I used to be drenched in sweat while attending functions and then I used to get into air-conditioned cars. I wasn’t getting any rest and I wasn’t eating properly because of the busy routine.”

He also spoke extremely sensibly about how this flurry of attention needs to be done in a slower manner and not dumped on the athlete all at once.

Chopra commented that “Aisa nahin hona chahiye ki ab medal aa gaya toh sab abhi kar do, aur phir ek mahiney baad sab shaant ho jao (it shouldn’t be as if we have to complete every celebration immediately because an Olympic gold medal has come, and then forget about it after a month).

The sport needs continuous attention. It shouldn’t be that you start remembering the athletes again after four years after the initial frenzy. These things can be done in small amounts over a period time.”

He couldn’t have been speaking more sense since this seems to be the usual attitude towards any athlete who comes home with a win. There is an overdose of media attention and gifts and rewards thrown at them for a few months and then just like that something else comes up and all is forgotten.

Perhaps the only ones who remember are entertainment sectors who are constantly looking for any dirty scoop on the players they can use to get some views.

Another comment of his on how he strikes a balance during recent times deserves to be shed a light on:

“The attention is indeed important, but there’s a Diamond League at the end of the month. I had planned to participate in it, but my training stopped completely once I returned from the Olympic Games because of the incessant number of functions. I also fell sick.

This is why I feel my fitness is not up there now. I can’t compete properly. That’s why I have to skip the event. I had planned to compete in at least two-three events.

These things need to change in Indian sport. All other Olympic champions are participating in Diamond Leagues. Their season is continuing.

We can’t be satisfied with one gold medal. We need to think at a global level. We need to continuously perform at global events like the Diamond Leagues.”

Here are just some of the examples of the felicitations and public events where politicians hold humongous gatherings in honour of him.

Neeraj Chopra Was Overwhelmed To See Grand Welcome by CM Yogi Adityanath Ji. This is what you call a grand welcome, the star was given a standing ovation to a packed house. pic.twitter.com/y7VzkOcLRV

A lot of people have supported Chopra too for his comments and said that it is indeed something we need to focus on.

A user on Twitter Sanjeev Sanyal even commented on how Chopra is not some anomaly that can never be repeated. There are tens and hundreds of really promising and talented athletes in India that are just waiting to get the light shined on them.

This is not to say that Indian athletes should not be showered with praise and attention if they do come back with a win, however, it should also be done in a bit more systematic way.

There is no point in raising them to God levels just for a few months, forgetting them since some other sensational news comes up and then trending your disappointment if they don’t do well in the next match.

The attitude towards Indian sports players needs to change with more focus being put on what authorities now do for the sports facilities, increasing awareness of non-mainstream games and overall support to Indian sports.