Home Politics What Is Jharkhand’s Pathalgadi Movement That Is Posing A Threat To The... 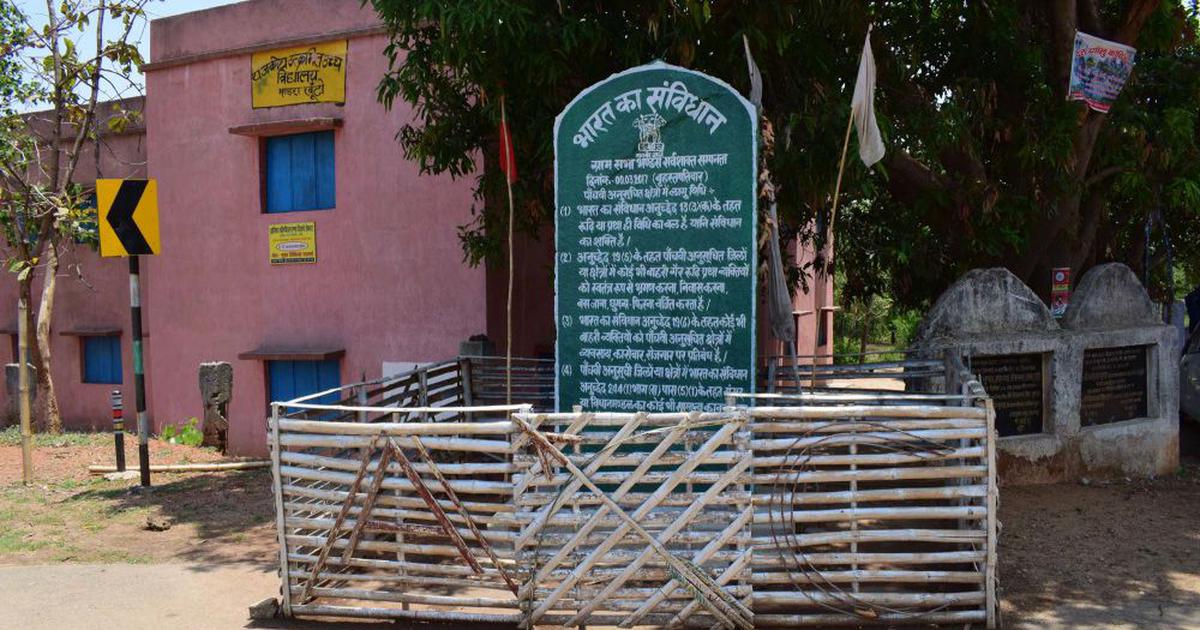 The state of Jharkhand is gearing up for its upcoming Legislative Assembly elections, scheduled to be held later this month. For the contesting politicians however, a chapter in the state’s history poses a major threat to their dreams – the Pathalgadi Movement.

‘Pathalgadi’ literally translates to the ‘laying of stones.’ The Pathalgadi movement in that sense started out with Jharkhand’s Adivasi communities installing huge stone plaques across four districts in the state, namely Khunti, Gumla, Simdega, and West Singhbaum.

A person entering these districts would first be greeted by these enormous green plaques, measuring 15 ft by 4 ft. But what distinguishes them from any other stone structure is that they are engraved with provisions from the Constitution of India, that indicate the special autonomy status granted to Adivasi areas.

The messages engraved on them include excerpts from the Panchayats (Extension to Scheduled Areas) Act, 1996 (PESA), and warnings to outsiders, restricting them from entering these villages.

Thus, the Pathalgadi movement is the tribal communities’ way of demarcating their territories and indicating to the lawmakers that their laws do not apply in their land.

The Roots Of The Movement

The Pathalgadi movement started out as an awareness campaign initiated to enlighten the tribal people about their rights as citizens. However, as the movement started to progress, it took a strong turn towards extremity.

The Chotanagpur Tenancy Act (CNT) and the Santhal Parganas Tenancy Act (SNT) prohibit the transfer of tribal lands to non-tribals and protect community ownership. When the BJP took charge of the state in 2014, there was a strong inclination to amend these acts.

Despite massive protests, the government went ahead with the amendments to make room for land acquisitions for facilitating developmental projects. For the tribal communities however, this imposition of ‘development’ on them was unjustified.

The Pathagladi movement grew with full fervour in opposition to these amendments, with the government being accused of siding with big corporates. Eventually the movement succeeded, and the government withdrew the amendment bill.

Also Read: FlippED: What Is The Best Way To Choose The Winner In Elections? Our Bloggers Fight It Out!

The Pathalgadi movement saw an uprising of young minds who unanimously agreed that their people and their lands must be governed by gram-panchayats, devoid of any influence from the state or central governments.

Once this idea started propagating, the notion of rejecting identities contrary to their own ‘Adivasi’ sense began to be encouraged.

This in turn led people to consider proofs of identities such as an Aadhar card or a Voter’s ID as ‘anti-Adivasi’ documents. When this sense of belonging started catching steam, anyone or anything outside the realms of their culture began to be considered as ‘foreign.’

Slowly, this idea festered as hatred towards the existing systems of governance grew, thus inspiring people to go so far as to boycott the general elections, held earlier this year.

Perhaps as a clap-back to such extreme decisions, this year, almost 10,000 Adivasis were accused of sedition under Section 124A of the Indian Penal Code, which punishes anyone who happens to “excite, or attempt to excite feelings of disaffection against the government.”

The Adivasis of Jharkhand strongly believe that they are being unjustly punished for invoking their Constitutional right to land through the Pathalgadi movement. This has strengthened their belief that the laws of the country stand not to protect them, but only to torment them.

A Crisis For The Upcoming Elections

With a renewed energy instilled in them, the supporters of the Pathalgadi movement vow to boycott the approaching assembly elections. If the government is not willing to listen to their woes, they are not obliged to adhere to anything that is even remotely connected to the government.

This decision is debatable to say the least. On the one hand we have communities that have been neglected and trodden upon for years together and on the other we have a well-oiled system in place called the Constitution of India.