Home Politics Was Anitha’s Suicide The Price To Pay For The Unfair NEET Exam? 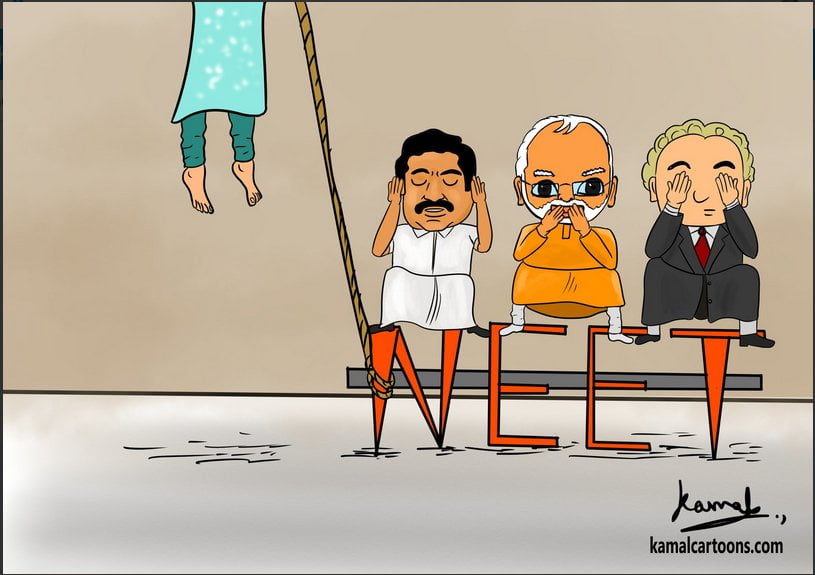 I’m sure you have been hearing about a certain Shanmugam Anitha, or S. Anitha for short, in the news a lot in the past few days. For those, who don’t know, Anitha was a student hailing from Tamil Nadu who committed suicide on 1st September, 2017, and whose death has spawned a whole movement in the southern India.

Widespread protests have taken place in Trichy, Tanjore, Coimbatore, Salem and Madurai, as a result of the student community’s outrage over her death which has only grown with each passing day. Celebrities like Rajnikanth, for instance, have tweeted out their condoloences and their support for her cause. Her death has become so predominant issue in the state of Tamil Nadu. It goes beyond mere education. And with good reason.

NEET is a one country, one test format introduced by the Government in 2012 for the admission of students into undergraduate medical courses in government colleges, deemed universities, private medical colleges etc. NEET overrode AIPMT (All India Pre-Medical Test), a medical entrance examination conducted by CBSE before 2012.

NEET was, from the beginning, heavily opposed by most state governments and private college. State Governments oppose the Test because it heavily relies on CBSE curriculum which would be unfair for students graduating from State Board and private universities oppose the test because they want greater control over the content and curriculum of the entrance test. The Late Chief Minister of Tamil Nadu, J Jayalalithaa even wrote to the Prime Minister Narendra Modi deeming the introduction of NEET as an in-egalitarian measure towards the students of Tamil Nadu who could not, given their academic training in the state, fare as well as students of the Central Board of Secondary Education (CBSE) on a national eligibility examination.

ALSO READ: No, It’s Not Cool To Show Lord Ganesha Eating Lamb In An Advertisement

All this brings us back to the story of Anitha and her plight.

Anitha was a bright student who scored 1176 out of 1200 in the 12th standard exams in the Tamil Nadu State Board examinations and her marks would have been enough to secure a medical seat in a good college, had this twisted, skewered test been exempted in the state of Tamil Nadu as it originally should have been. Now, it is common knowledge that we hold doctors and surgeons at a higher standard than other professions, and with good reason, for they hold our lives in their hands, for all intents and purposes.

So, a common eligibility / entrance test that is devised, keeping in mind the importance of assessing the aptitude of the candidates who will in the future be going through a gruelling training process, is a rational and logical step towards ensuring that that standard is maintained.

And this brings a very crucial point to light.

Firstly, that a common eligibility test can only be accepted as the norm if there was a common education system in place. There is CBSE, ICSE, IGCSE, and State Board to name a few and the worst part about it is that the curriculum set for State is not comprehensive enough to help the students compete with the students from other boards in the real world. And that sets them back immensely.

That is exactly what happened with Anitha.

In an interview, she stated that she had always wanted to become a doctor. It was her ambition to give back to the society by becoming a doctor and helping those around her. But instead, she was denied the opportunity to pursue a profession that she felt very passionate about because of an unfair eligibility criteria put in place to further a faulty, tortuous education system already in place. NEET is barely a genuine assessment of merit and excellence as it has been purported to be by the Government and the test’s format, inclining heavily towards English, has been described as wholly favourable to the CBSE curriculum and students belonging to CBSE.

Moreover, NEET being an exam that is supposed to test the aptitude and basic knowledge on the subject should be open and accessible to and by all. But the simple fact that State Board syllabus is neither competent nor comprehensive enough to fulfill even that basic criteria says all that can be said about the Indian Education System.

Who Was Gauri Lankesh? Demystifying The Gutsiest Journalist In India