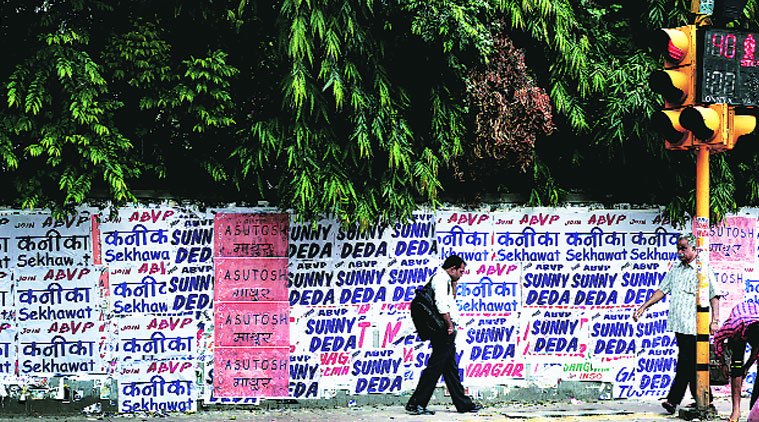 Disclaimer: This article does not intend to harm your feelings and in no way tries to demean or trivialize the atrocities of the Holocaust. This is just a personal take on how aggressive DU elections can become. If you are incapable of taking humour/sarcasm then do not read further. No one is compelling you to!

North Campus is a dreamland for students but once every year dreamland becomes ‘wasteland’.

The roads disappear in the sea of pamphlets and all you hear is ‘vote and support’.

The elections season is nothing but a nightmare that can get worse anytime just like the Holocaust where a man’s lust for power destroyed Europe forever.

The European mainland was blissfully quiet until tanks took over and destroyed everything. The landscape became unrecognizable and the people, well, let’s just say weren’t there anymore.

Our loving campus becomes unrecognizable too. You can’t have Sudama Ki Chai because the chaiwallah cannot be spotted. Roads that usually are empty of traffic will have party workers, Scorpio, Endeavour, Fortuner ( and other big cars that have huge surface area to stick maximum pamphlets) and Dhol-wallahs.

Read More: Unusual Comparisons: K-Dramas Are More Indian Than We Thought Them To Be

Few Men against Many!

If history did teach us right then it was one man Hitler who wanted to exterminate the entire race and he did everything in his power to kill them (and was pretty successful too).

Now take a look at the DU elections where one party candidate will utilize all his money to make you remember his ballot no. You can forget your phone number but dare you forget his ballot number.

Who can forget the free food they serve just to gain your vote or the fake promises that are made, just like Hitler made the promise of non-aggression to the other European nation. Vote and Support, you have no other choice!

Hitler did not give much of a choice to the people living in the areas captured by him.

They had to support him, hand over the Jews and under no circumstances could go against him. Death was the easiest punishment he gave just like our candidates who will get into a brawl wherever, with whoever and whenever they want because muscle power rules.

You cannot challenge or question their idiocrasy because if they do not have an answer they WILL BEAT YOU UP and death by traffic-jam is the easiest punishment they give.

Just like Hitler, DUSU candidates too have their army of foot soldiers that go from person to person multiple times to ask for votes.

However, the biggest similarity between the two is their veiled dictatorship.

While Hitler got elected and later used his position and power to side-line all other politicians similarly, the candidates once elected disrupt events they consider ‘anti-national’, dance shamelessly in fests and use their power to save themselves from being thrown out for shameless, obscene dancing and no one can question their method of work. Delhi University Students Union Elections have for long been criticized by students and teachers alike because of the ruckus they create but the we are all helpless to change the method of Union elections because people behind the curtain not just control the election but also the country and they want no such change.

It is ironical that Union people are there to help the students out but instead are the biggest nuisance on the campus.