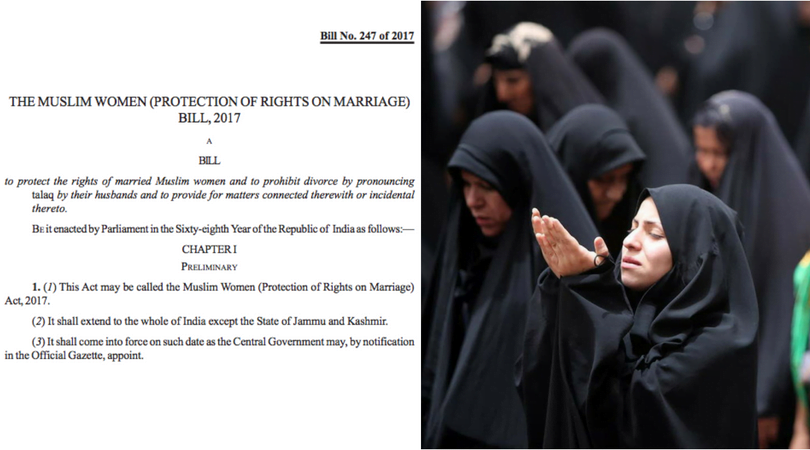 Triple Talaaq became a major political issue few months before the UP Legislative Elections 2017. The issue rose to such an enormous level that even after winning the Uttar Pradesh Assembly elections, Narendra Modi addressed it from the Red Fort in his Independence Day speech.

Now that the winter session of the Parliament has commenced after several days of delay, The Muslim Women (Protection Of Rights On Marriage) Bill 2017, commonly known as Triple Talaaq Bill, was tabled in the Lok Sabha by the Minister of Law & Justice, Mr. Ravi Shankar Prasad, who was also one of the voices against the said practice of instantaneous talaaq.

A modest look at the Bill, which is now available on public domain, would bring no suspicion to the beneficial and reformatory nature of the legislation. It comprises of 7 sections, and the features of the draft legislation can be summed up as follows:

A. It makes the pronouncement of Talaaq-e-biddat or any other similar form of talaaq a cognizable and non-bailable offence. (Cognizable offences are those where police can arrest a person without warrant)

B. Talaaq maybe declared in any form: spoken, written or electronic.

C. The maximum prescribed punishment is three years and fine.

D. A married Muslim woman upon whom talaaq is pronounced is entitled to receive from her husband such amounts of compensation as the court decides and also the custody of her children in the manner the court decides.

E. Any instantaneous and irrevocable talaaq pronounced under this Act is void and illegal, i.e., it will have no effect on the marriage.

Also read: What Is Troubling About The Supreme Court Judgment On Triple Talaq

The recent affairs of the government in relation to Triple Talaaq has been painted with a communal colour, and the government, especially the ruling party, has often been accused of trying to oppress and sideline the Muslim community. The extent of it was such that even the Supreme Court was being targeted for declaring Triple Talaaq illegal in its recent judgment.

But all is fair in war and love. And this isn’t either.

The draft legislation seems to be beneficial to Muslim women. It actually uplifts and edifies the stock of Muslim women who have been or will be subject to such out of touch practices which the Holy book prescribes. It is not anti-Muslim but is pro-Justice.

If there’s one thing the present government has done to actually bring a reformative change exclusive to the minority community, then this is the one.

Is the legislation perfect? No. There are concerns with it.

The Legislation has failed to take into context the social background and repercussions of application of the provisions.

How? There’s nothing mentioned about the aftermath of reporting a Triple Talaaq incident. Sure, there are provisions for compensation payable to the wife but that takes place at a different time and is a different conversation altogether. What happens when the wife reports an incident of talaaq? What if she is harassed by the family members and the society? What if she is kicked out of the house?

The Triple Talaaq Bill remains mum on these questions.

The provisions contained in the Domestic Violence Act are of highly valuable nature. Any woman victim of domestic violence has a right to residence in the matrimonial house, has access to service providers (NGOs & companies), and a Protection Officer takes care of all the formalities with respect to the case at hand.

This would have been much easier and helpful.

Anyways, the Bill is now up for introduction in Rajya Sabha and I hope these issues are addressed.