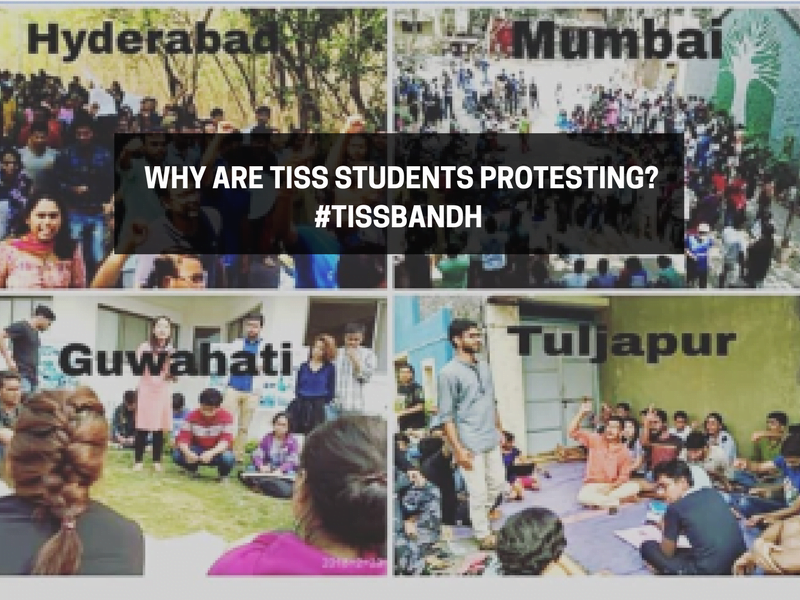 Hashtag TISS Bandh is going viral all across social media. This is the result of sudden retraction of waiver on hostel and mess charges by the TISS (Tata Institute of Social Sciences) authorities.

This came as a shock to students from the marginalised sections of society who were covered under the GOI-PMS i.e. Government of India-Post Matriculation Scholarship.

Imagine being promised aid in fees which suddenly stands cancelled on notice by college authorities? Especially, from the point of view of a student who comes from a less well-to-do section of the society!?

The protest began as an agitation of such students who joined the college with relief that it won’t be a financial burden to them. The college at the beginning of 2017, suddenly asked for hostel and mess charges, a sum as huge as Rs. 50,000 per student.

As reported by The Wire, an agitated student revealed:

Until 2017, SC and ST students got a waiver on hostel and mess fees along with tuition fees, and this money was paid by the respective state governments as a part of the GOI-PMS. But this money gets disbursed late and so the institute would recover the costs from the University Grants Commission (UGC). But with budget cuts at the UGC, the administration decided it would recover that money from us.

The protests began at low scale with affected students raising their voice against the wrongs by college authorities. On 22nd February, the protests reached another level when all the students joined hands for collective social justice and demanded full ‘TISS Bandh’ at all the 4 campus.

Also, read: How The Kashmiris Are Dropping Guns And Using Art, Music, Poetry To Protest

The protesting students have demanded that the decision of retracting aid be revoked. The students from marginalised sections who took admission in the respective batches of 2016-18 & 2017-2019 be exempted from paying such huge amounts.

Especially, when the prospectus clearly mentioned such aid and the students took admissions under such an impression. Interestingly, partial demands of the students have been accepted. However, the students are not ready to give in until a formal assurance is given to them.

Earlier too, students from this group had taken up their demands to different Ministries but nothing fruitful came out of such meetings and negotiations. Hence, the students are being extra careful this time.

Several alumni and TISS welfare organisations have come out in support of the protesting students. So much that the Mumbai Campus had to postpone exams and the premises of all the 4 campus were locked and no classes have been conducted since 4 days i.e complete ‘TISS Bandh’ until demands of the students are heard.

Social media too has played a major role in highlighting the protests, hashtag ‘TISS Bandh’ made all 4 campuses stand in solidarity. A special Twitter handle @tissforeveryone has been made to gain more support by the students in order to make their demands heard.

On the 5th day i.e. tomorrow, the TISS protests are coming to the capital city. A Facebook event has been created which asks people to gather near Shastri Bhawan, the office of Ministry of Human Resource Development.

Appeals have been made to students from various universities to join hands with TISS student community in their battle of right against wrong.

What unfolds on the 5th day of TISS protests? We’ll have to wait to find out.

UPDATE: The protests don’t seem to stop until demands of students are heard in absolute terms. As the protests reached day 8 & 9, almost 15-20 students of the Hyderabad campus started hunger strike.

This looks like a tough battle, here’s hoping something positive comes out of this struggle that has been going on since days at all 4 TISS campus.

How To Prepare Yourself For Bandhs Or Protest Strikes? (Video)