Home Travel This Is What Waterfall Rappelling At Sandhan Valley Looked For Me: LivED... 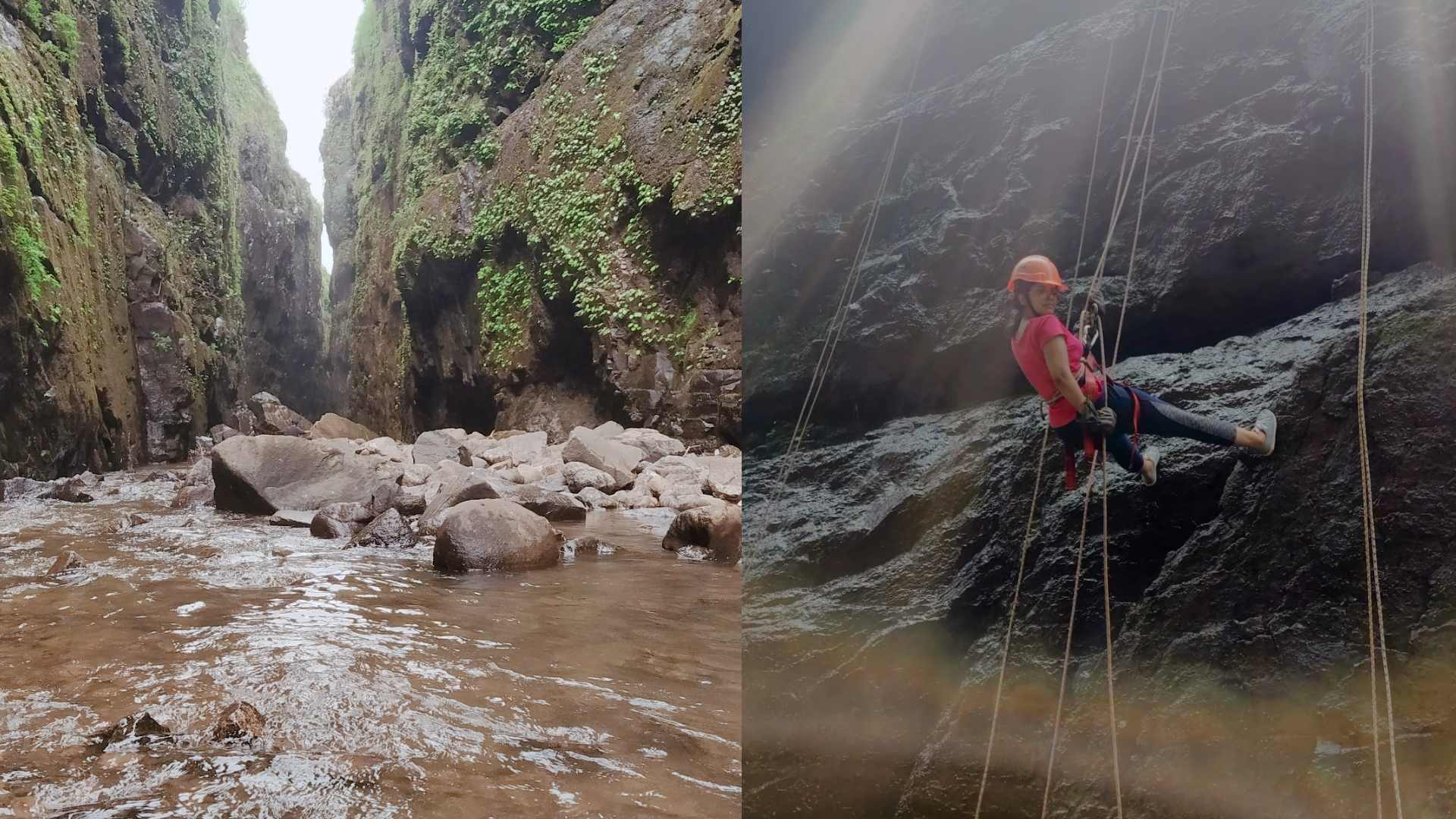 I have grown up watching Bear Grylls dangle 100 feet above ground and questioned his sanity. Guilty because when I had a choice, I plunged headlong into the opportunity.

In life, we try to segregate the journey from the destination which kills the beauty of the path. However, while trekking, the journey itself is your destination.

It’s hard to believe when I say this, but I have dragged my friends to climb a gigantic mountain on my birthday and refused to speak to the ones who didn’t follow my crazy ass up the hills. Even so, I had never been insane enough to jump off a cliff.

Well, it was about time!

Monsoon arrived and so did the invitations. One, in particular, caught my attention.

Rappelling is a dangerous sport in which you descend a steep slope with the help of a single rappel device and your life depends on how correctly you use it. Rappelling is common among the military, and police. Many climbers die every year due to carelessness or even a small mistake.

The rappel device consists of a rope which is anchored to a tree or boulder. It is then connected to a descender which is attached to the harness. It controls the speed at which the person climbs down.

About The Valley 0f Suspense

Sandhan Valley is one of the greatest canyons in the Sahyadri Western Ghats. The valley is 200 feet deep and 1.5 km long and is located near Samrad Village. It’s the most sought-after destination for nature freaks or trekking enthusiasts.

It was an overnight bus journey from Thane. The trip was arranged by my friends, who were a part of the Rotaract Club on 21st July, last year. We sang for the first few hours of the journey and then decided to nap.

We woke up to the beautiful fog-ridden mountains in Samrad Village. The icy cold winds left a trace of red hue on our faces.

We stuffed ourselves with enough poha and chai to last us all day.

After two hours of uphill climb came the moment we all dreaded. We were at a height of 120 ft where we met our guide for rappelling.

‘Oh Lord! So he’s the one who’s going to push me off the cliff.’

More such thoughts crossed my mind when I saw him and others tie four ropes to the tree nearby. It was supposed to bear the weight of five people.

‘That tree does not look sturdy! It’s definitely going to come off and I’m going down. Adios!’

The brave ones volunteered to go for it.

Also Read: In Pics: Unusual Adventure Sports In India And Where To Do Them

After mustering courage for an hour, I finally decided to go forward. Despite many warnings, I peeped down from the cliff and that’s when it seemed real. I started trembling and my heart thumped with fright.

Silencing my thoughts, I wore the harness and gloves handed to me. I was standing a metre away from the edge of the cliff while the guide was tying my harness to the rope.

I was instructed to keep my legs perpendicular to the wall. My brake hand (right hand) was placed on the rope behind my back. I was supposed to feed rope continuously and slowly so that I lowered down at the right pace.

I let go and leaned backward. My heart continued racing. It seemed difficult to manage so many things at the same time.

The wall was slippery due to the waterfall and my legs were shivering. I kept feeding rope and carefully placed my legs on the wall after every few meters of descent.

Midway, I could hear my friends cheer for me from the base and forced me to turn around for a few pictures. From that moment on I realized that I was hanging from a cliff in the middle of nowhere and felt proud of myself. A euphoric sense of freedom took over me.

I completed the rest of the course with a smile on my face. It’s a feeling which cannot be expressed but only felt. Intoxicating!

I’ll be honest though, it was so taxing that I lost balance when I put my feet on the ground and fell on the rocks. I spent the next two hours exploring the water-carved valley along with my friends. Still shivering!

The experience was nerve-wracking but something I would love to try again. It made me feel alive and I am addicted to the feeling.