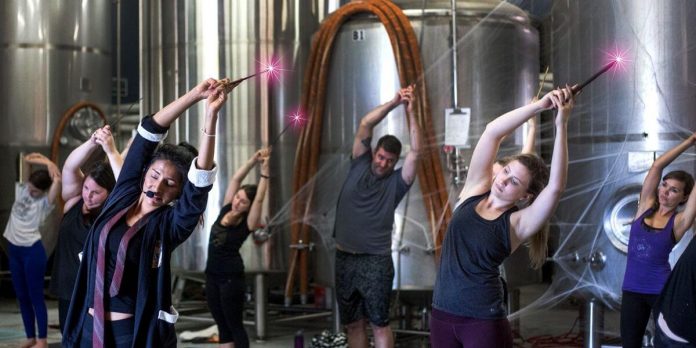 When it comes to Yoga, you wouldn’t really have much to be surprised with considering most of it is pretty standard.

At least the actual Yoga is and not the strange and westernized Yoga that foreigners are into that tries to combine Yoga with several other things.

Yoga also is assumed either something that old people do, basically, anyone over the age of 28 or you are forced to do during PT time in school. Yoga has seldom been considered as something fun and interesting that the young ones would be enthusiastic about.

However, it seems this new kind of yoga, called Harry Potter Yoga, might just be the thing to increase the interest level of the youth in this practice.

What Is Harry Potter Yoga?

Yoga is quickly becoming an extremely favourite practice in the West with them having welcomed it with open arms and eagerness that we Indians ourselves might not understand.

But, sisters Isabel Belran and Ximena Larkin, one is a certified yoga instructor and other organized the event respectively, have completely given a new and unique take to yoga by adding in a Harry Potter theme.

Read More: QuoraED: If Harry Potter Was Made In India, Who Would Play What Role?

However that is not just to say they named a few poses after the book and its character or had a few simple Harry Potter themed snacks, but they have gone all out by giving the participants of the class their own wands, reciting passages from the book and more.

Another such workshop has popped up in Toronto, where Pop Up Asana Toronto raises money for charity by organizing these Harry Potter yoga classes.

Let us take a look at exactly how these classes are conducted: The purpose of these unique yoga classes was to combine the craze around Harry Potter and Día De Los Muertos (Day of the Dead) which the Mexican sisters celebrate. The idea to include Harry Potter as a theme to their yoga classes was initially to increase the attendance rate and participants. The usual Yoga poses were given Harry Potter-ified names like the tree pose was named Whomping Willow. And for the cat/cow poses, participants were told to imagine the transfiguration of Professor McGonagall. The participants are each given a wand when starting the class to make the whole experience more authentic. The mats that the participants use are called ‘invisibility cloaks’. The students when going into the ‘Reverse Wizard’ pose or into Warrior II mode, are made to practice spells like ‘expecto patronum’ and channel their happiest memories. Apart from the Harry Potter-themed yoga poses, gear and clothes, the classes also serve snacks based on the beloved series to further enhance the experience.

Yoga Is A Practice Of Faith, Not Religion