Home Food The Survival And Protection Of Alphonso Mangoes In India Relies On The... 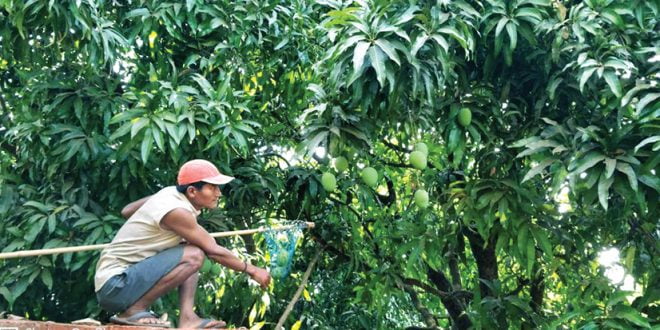 As the month of June closes in, there is nothing better than the seducing fruit of Alphonso mangoes that urges you to beat the scorching heat.

Remember the clichéd summer vacations where we had our trials knocking off the entire fruit only to chew the pulp and feel the juicy stream running down the gullet?

If you are brave enough to take the whole fruit inside your mouth and eject out the stone, then be a guest to the story of the people who live in trees to protect the fruit.

The Tales of The Rakhwaldars

The monkey thieves announce their presence through loud squeals in the early hours of the morning over the Alphonso orchard in Ratnagiri.

Narbahadur Vishwakarma, who is one of the Rakhwaldars aims his catapult under a 40-ft tall tree to silence the monkey thieves. Narbahadur is among the 70,000 immigrants who come to India once a year during the blooming season of the fruit.

From packing crates to sorting the mangoes as they are packed for export, these workers have accustomed themselves to the challenging conditions by spending about seven months in a year protecting around 1,000 trees in the orchard.

The Shift From Local Workers To Nepali Migrants

Although the unseasonal rain during winters has delayed the arrival of Ratnagiri Alphonsos in the market with price spiking high as far as Rs 1200 per dozen, no mangoes are damaged on a Rakhwaldar’s watch.

Initially, the locals were employed to do the job but they wouldn’t stay up all night like the Nepali migrant laborers who put their neck on the line for guarding the prized Alphonsos.

The 1990’s saw a boom in Alphonso mango business, drawing laborers from Nepal to the districts of Sindhudurg, Ratnagiri, and Raigad within the Konkan region of Maharashtra.

You Can Also Read: Stereotypical Things People Assume About Assam That Are Wrong

The Plight Of The Nepali Migrant Workers

When Nepal’s unemployment rate hovered at around 40 percent, many young men and women agreed to pay the high price by working abroad.

Just like the Nepali song “Suna Saili” where a young man working in Qatar tells his wife to persevere until he comes back home, most of the laborers travel around 2,000 km from the hilly district of Kaili to Konkan to send their hard-earned money back home.

They are left to cope on their own in the laid-back labor market without safe working and living conditions refused by the State policy and their own Government.

The Nepalis refuse to raise their demands against all odds. They are not insured in case of injury and they have to pay the penalty for damaged mangoes as the sum that was promised to them goes down.

Mango growers in Ratnagiri employ two Rakhwaldars in pairs paying them around Rs 50,000-Rs 1 lakh for the six-month season. One Nepali worker’s duty lies in guarding and safely packing around 2,000 mangoes in crates which fetches around Rs 20 lakh as they reach markets worldwide.

Hence, negotiating Rs 1 lakh from an average payoff of Rs 20 lakh presents a good deal to the owners who are willing to make the most out of the given situation.

The Cost of Cheap Labour

The system of keeping Rakhwaldars 10 years back had men in the arena catering to their designated job of keeping mangoes safe and fresh for export.

Some even took to trees for shelters with no real living conditions. This meant they had no time to cook or do household chores compelling them to spend their income on buying food.

This led to the introduction of the partnership practice termed as the Jodi system across the mango orchards. The men would bring womenfolk or younger relative with them.

They would be given the task of guarding mangoes whereas the men would look over the sorting and packing task after the mangoes were picked.

The couple would be paid 1.5 times the salary of one Rakhwaldar. This led to a deviation in the single migration pattern that began to include families.

With very less employment back in Nepal, these laborers continue to guard as many as 1,000 trees on their watch even it means infrequent rests on rooms barely available in the property.

Probably earning money which is 1.6 times as valuable in Nepal is necessary to sustain their livelihood at the cost of being thrown at the arms of vulnerability or marginalized foreigners.