Rapper Aditya Tiwari, who goes by the name MC Kode, has allegedly gone missing after posting a message hinting at self-harm on social media. The New-Delhi based rapper, who got into a controversy recently, has left his fans and well-wishers worried for his safety.

The Controversy Behind MC Kode’s Disappearance

MC Kode has been the target of netizens’ rage and trolls after a video of him from 2016 surfaced on social media. In the video, he has abused the Hindus’ sacred texts and beliefs. “I will f***ing mast***ate on Mahabharata”, he said. He took a pass at cows also.

He is Aditya tiwari know as stage name MC KODE

There is no denying that the remarks are extremely outrageous. They are insensitive to an entire religion and its followers. So, when the video got viral on social media, Aditya Tiwari was met with hateful comments, trolls, and threats. 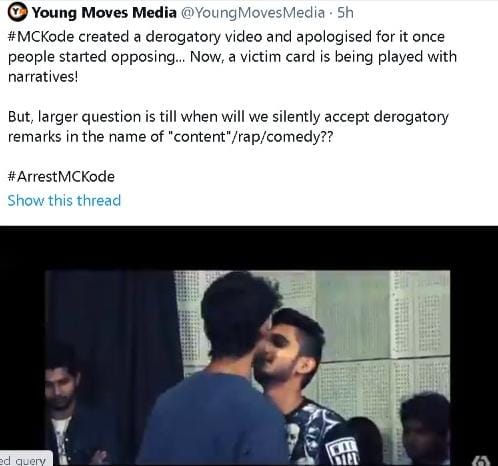 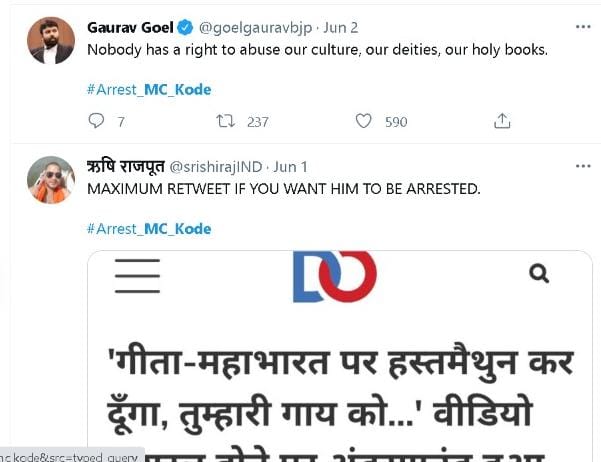 An FIR was filed against him by Advocate Ashutosh Dube on the account of abuse of his Freedom of speech and Expression. Albeit, he publicly apologized for the same and requested the withdrawal of his content from YouTube, it was too late in the times when controversies spread like wildfire.

In an Instagram live recently, he mocked the Indian Army and national anthem also.

Read More: California’s ‘Museum Of Death’ Celebrates The Blessing It Is To Be Alive

After being subjected to nationwide hatred, MC Kode, on Thursday, posted a story from his private account on Instagram hinting at suicidal tendencies.

“I do not blame anyone for anything but myself. A relief from my own existence is gonna serve as a punishment that the entire country wanted,” he wrote. As per this post, he was standing “at an isolated bridge overlooking Yamuna river”. 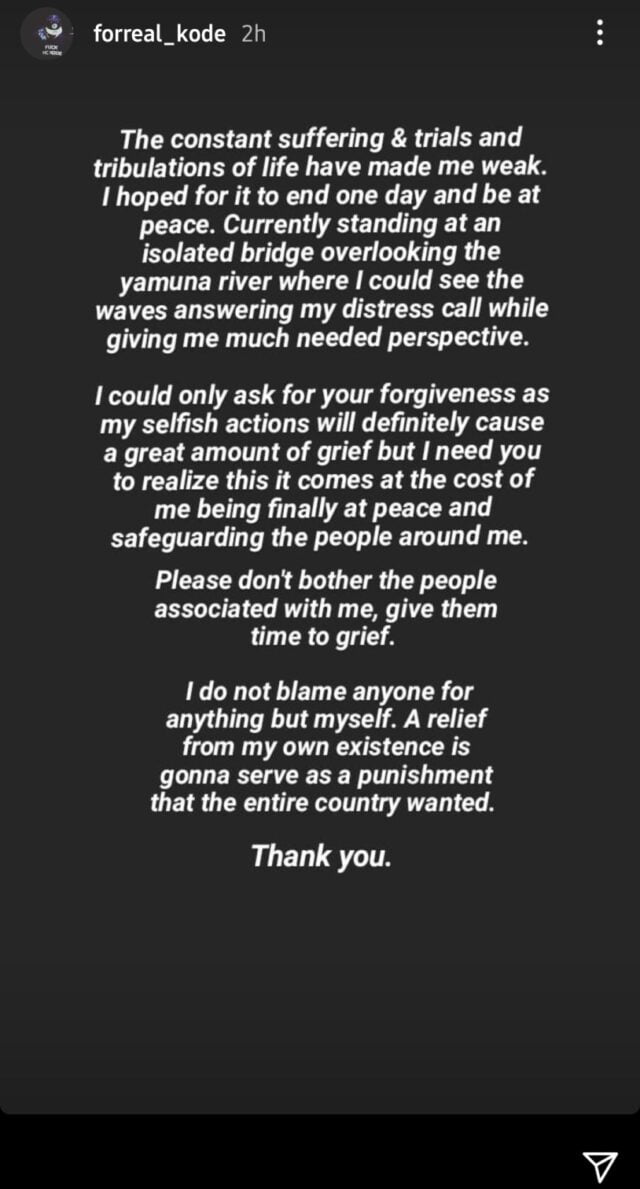 Various search parties have been employed to search for the rapper, but all efforts have proven to be in vain till now.

Numerous accounts have posted a picture of the alleged dead body of the rapper. Please note that it is a piece of fake news.

However, it is actually the body of a Rohingya victim from Bangladesh, who drowned in a tragic accident in 2017. Users are advised not to blindly trust any news or image that circulates on social media. 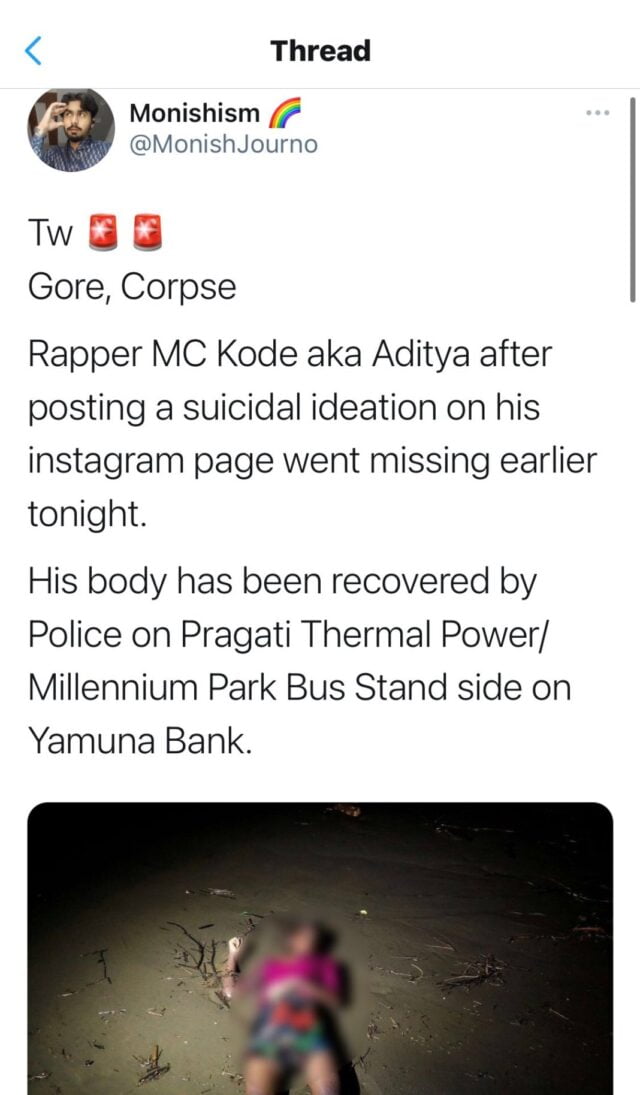 What is problematic in the scenario is how people are celebrating his disappearance and calling it an act of justice by God. How noble is it that we wishfully desire the demise of a young life instead of a punishment that is appropriate by law? 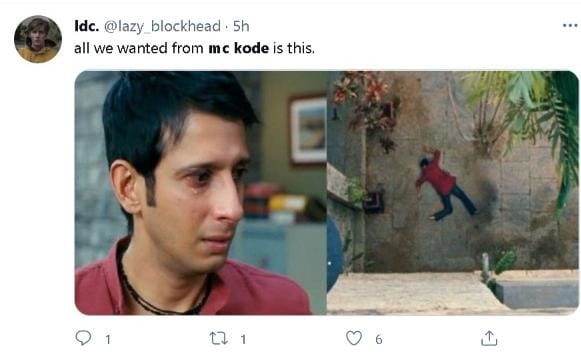 Few people have called out this toxic response. “He made some mistakes, has hurt sentiments of some people, there’s law and order in this country, arrest him, put him into jail, put a fine on him. But hoping that someone dies by committing suicide is so much worse than what he did,” wrote a user.

Not The First Time That He Has Gone Missing

Apparently, MC Kode had gone missing back in 2014 also, as pointed out by a Twitter user. A guy named Vishesh Dabas had shared a group photo highlighting Aditya in it and urging people to report if they know his whereabouts.

However, there is no authentication of this information yet. 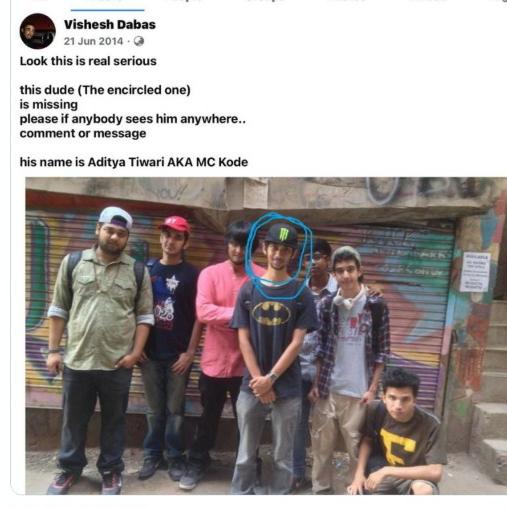 What MC Kode did is unlawful, unethical, and hateful. Those were acts of enticing communal hate and in an attempt to harm communal peace. One may feel negatively towards a particular religion or community, but it does not justify them spreading hateful comments publicly.

But, the general public’s reaction to his disappearance is not justified either. There are proper channels to punish someone when they commit an unlawful deed. Celebrating their demise is not one!

Sources: The Wire, The Week, OPIndia

Why Do Celebrity Deaths Make Us Grieve So Much?