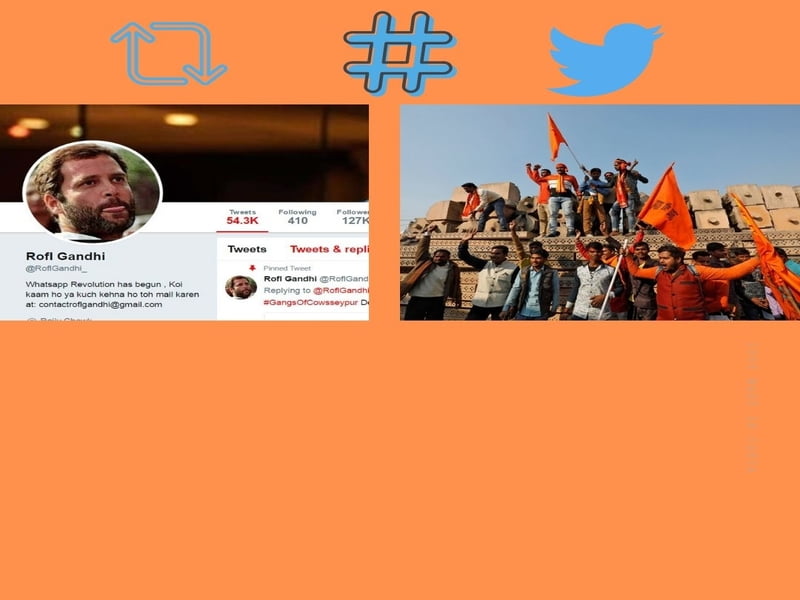 Yesterday, #NoidaFilmCityExcavation was trending on Twitter with thousands of tweets urging for an excavation to dig up the lost “Hanuman Ji ka mandir” from under Noida Film City in the outskirts of Delhi.

Now, the hilarious part in all this is that the trend which was blindly being followed by so many microbloggers was actually started as a joke made by a parody account which took a dramatic turn because apparently, people don’t get sarcasm these days.

A divisive programming headline by Hindi TV channel Aaj Tak had prompted a Twitter user, known for his humorous tweets, to cause hashtag #NoidaFilmCityExcavation trend across India.

User @RoflGandhi_ posted a series of tweets in Hindi that Sector 16 (underneath the media offices) housed a huge Hanuman Temple several thousand years ago when Noida was known as Navoday Nagar.

“Professor Balwan Dahiya Ji is a researcher of Hindu Spirituality at Rohtak University. Has done a deep study on Hanumanji. His research is that when Hanumanji was returning with Sanjeevani, a bead on his mace fell down. After thousands of years, In the ninth century the bead was found by a poor Kriparam,” Gandhi’s parody account tweeted

“Professor Dahiya’s grandfather Bhaleram Dahiya also once met Nehru and demanded an excavation for the discovery of the Bajrangi temple. But they were ignored. Today, a number of news studios are inhabited in Film City and imprisoned in the ground, a miraculous mystery that can change the fortunes of India.”

Soon, tweets such as the following started to show up on everyone’s timeline, until the hashtag was one of the top trends of the day.

Lalu Prasad Yadav’s Rashtriya Janata Dal on Twitter came in support of the excavation. They tweeted, “According to BJP, Hanuman was a Dalit, not a Savarna! That is why Brahminical BJP #NoidaFilmCityExcavation I am coming! This is a question of faith in Hindu identity and the Hindu religion of Bahujan society! If it is delayed or played with Hindu public sentiment, it would have devastating consequences!”

Director and producer, Shekhar Kapur took a dig at it. He said,

“Yes! We tried to keep this a secret for a long time. We were asked by the archaeological society of India not to tell anyone as there would be huge problems on ownership. Last I heard Anil Kapoor has it in his home #NoidaFilmCityExcavation.”

Many other people joined in.

I fully support #NoidaFilmCityExcavation. Demolish all those propaganda studios and build a Hanuman temple. India will be a much better place.

Around 4,000 people, however, actually took all of this seriously and signed a petition on Noida Film City excavation created by Gandhi’s parody account on Change.org.

Truth Behind This Elaborate Joke

One of the reasons behind the popularity of hashtag #NoidaFilmCityExcavation appears to be a religiously polarizing programming headline, “janmbhoomi hamari, Ram Hamare, Masjid waale kahan se padhare? (The birthplace is ours, Ram belongs to us. From where did these people from mosques arrive?)”, by Aaj Tak, whose office is also located in the Film City of Noida’s Sector 16.

The joke was actually Twitterati taking a dig on Aaj Tak for using the headline to advertise their “debate” just one day after the News Broadcasting Standard Authority (NBSA) issued a statement for responsible coverage of Ayodhya issue on television.

Just think about it, though? Why would “bhavya manka” be right under the India Today building for anything other than comic overkill?

It seems like we can laugh at the idiocy of all this, forget that this happened and move on. It’s just a Twitter trend after all.

There are two very disturbing things about this trend: people falling prey to ‘fake news’ and the thing that started it all (the Aaj Tak headline).

Even though #NoidaFilmCityExcavation started as a joke, so many journalists, politicians, and microbloggers thought that it was real and started demanding for an excavation.

Even a little bit of research, like looking at the user name of the account that started it all (Rolf Gandhi), could’ve shown them that the whole thing was mere sarcasm.

I bet a lot of people still think that it was real and are upset at the fact that no matter what they do, Noida Film City will never be excavated because their community is ‘always treated unfairly’.

Secondly, just look at that poster published by Aaj Tak. Does it not scream of deep-rooted prejudice against the minorities? And the worst part of all this is that they do it for the sake of views.

They know that a controversial headline or poster will gain them numerous retweets and a lot of people will tune into their channel to see the drama unfold in real-time. Yes, we have officially reached an era when the news channels want to stay in the news.

Whenever any riot or cases of communal violence happens in this country, we all look at politicians to blame it on.

But, the truth is that it’s the news media that often incites hatred and deep-rooted jealousies of one community against another. As a result, the minds of people are poisoned and prejudiced and hatred is retained permanently.

This needs to change. The normalization of hate for the sake of staying relevant is nothing but seriously revolting in this day and age.

We need to change. We need to understand that religious respect and freedom is not a zero-sum game. It’s for everyone.