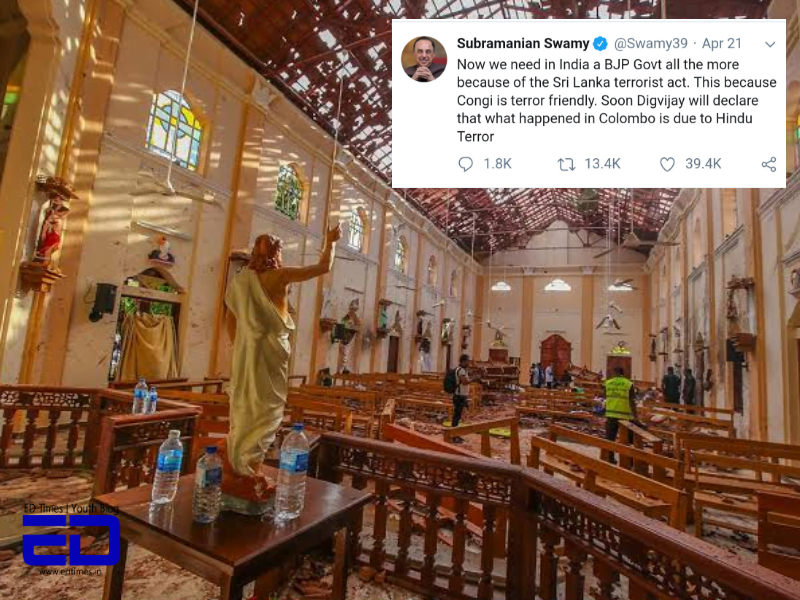 In a series of attacks in Sri Lanka on Easter, the death toll continues to rise and has resulted in approximately 300 deaths, while many continue to fight for their lives. Sri Lanka authorities have identified National Thowheeth Jama’ath as the terror outfit behind the assaults.

However, the Islamist Terrorist Organization has not claimed responsibility for the attacks. Soon after the attack, intolerance, and hatred has risen all over Asia, pouring in the form of violence.

Amidst prayers and sympathies pouring on social media from all around the globe, Indian politicians and media have been slammed by Sri Lanka for politicizing the issue in these sensitive times.

Sri Lankans took to Twitter to condemn the political parties in India that used the terrible incident as a gimmick to promote their party and propaganda.

Meanwhile, the Indian media predicted the involvement of ISIS and other Islamist groups even though there were, by then, no official declarations from the Government of Sri Lanka.

As a result of the fake news and rising tension among communities, Sri Lanka Government had to block social media platforms including Facebook and Instagram.

PM Modi was widely condemned for citing Sri Lanka blasts to seek vote for BJP in order to “end terror”.

Subramaniyam Swami also joined him and took to Twitter to promote BJP in the light of these incidents.

Ashok Swain went a little ahead and blamed RSS for these attacks.

The rise in polarization and communal hatred during elections has been a decades-old political gimmick; the reasons for which are a filth I would not contaminate my article with, for most people are aware.

However, these politicians painted their propaganda over these attacks and so every prayer and every voice of an Indian that stood in support of Sri Lanka remained shadowed under these statements.

Related: Anti-Terrorism Sensitization By The Media And Government Is The Need Of The Hour

Indians’ Response To The Allegations

Among sympathies and prayers from Indians, there were people who apologized to Sri Lankans on behalf of India and our leaders.

Whereas, there were also people who defended our politicians and called out Sri Lanka Government for failing to take actions despite the warnings.

Every hate comment is incomplete without the words ‘sickular’ and ‘liberal’.

People from different communities targeted and bashed each other meanwhile every claim of ‘tolerance’ and ‘unity’ and every teaching on ‘terrorism has no religion’ died in a corner.

On this note, I would leave you with a positive tweet and with an urge to pick your side – humanity or hate?

Lahore Attacks: Serves Them Right Or Is Wrong In The Name Of Humanity?