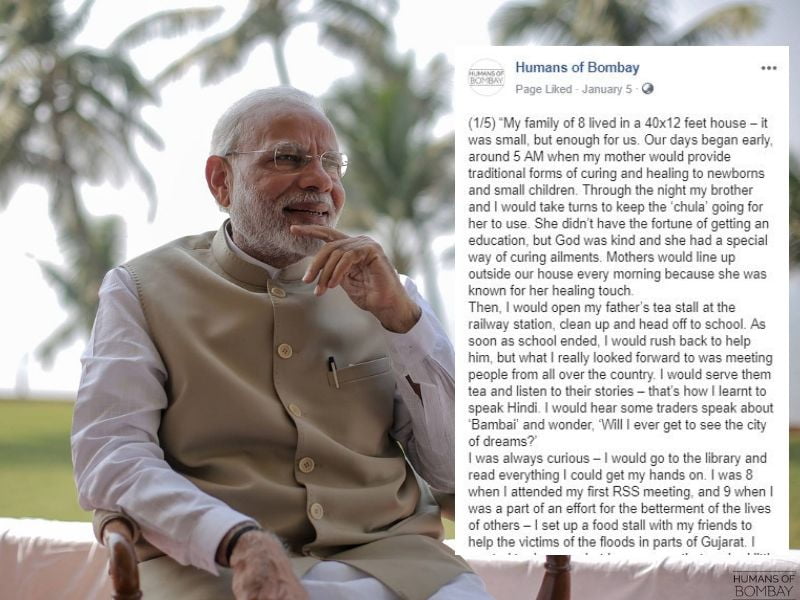 Popular Facebook page ‘Humans of Bombay’ has had a special place in our hearts, as it narrated stories of ordinary people from the streets of Mumbai. The stories, which are often inspirational or at times gut-wrenching, always had an instant connection with the audience.

However, its recent story based on Prime Minister Narendra Modi’s life struggle has sparked a lot of controversy, for it deviates from the original objective of the page, which is to share inspirational stories of ordinary people.

As part of a five-part series, the Humans of Bombay posted the first part of PM Modi’s struggles on its social media handles on Saturday with the hashtag #TheModiStory.

Today, after four days, the page shared the second part of the series.

(2/5)“While growing up, I had a lot of curiosity but very little clarity. I would see army men in their uniforms and…

The fact that the story is being shared right in the beginning of the election year immediately strikes as odd, and makes us question the page for doing paid propaganda for politicians before elections.

Humans of Bombay and Their Mission

Started in 2010 as a photography page, Humans of Bombay today has a strong following on social media, with more than 905k likes on its Facebook page and 324k followers on Instagram.

The page’s concept is derived from ‘Humans of New York’, another popular Facebook page that shared stories of people from the streets of New York.

On its website, they define themselves as ‘a team of storytellers that concentrate on the journey of individuals, showing our followers that each and every person is unique, inspirational, and relatable’.

Given their holier-than-thou description, it really does come off as a surprise to see them doing alleged paid content such as this to promote a political propaganda.

Even though the story does not delve into political ideologies, it is hard not to think of it as a political propaganda, selling the story of PM Modi’s hardships for votes.

The post garnered a lot of attention, as you’d expect. The post was flooded with comments about how disappointing it was to see Humans of Bombay doing such stories and deviating from its mission, which was to share the stories of ordinary people.

Not The First Example Of Paid Content On The Page

This isn’t the first time that the Humans of Bombay page has posted paid content on its page. Movie stars have found it a subtle way of promoting their movies by sharing their personal stories.

In August 2018, Anil Kapoor featured on the page during the promotions of his film Fanney Khan.

“Growing up, I was fascinated with Shah Rukh Sir––I used to stare at his posters and often think that if an outsider…

Mind you, my problem isn’t with these movie stars (and politicians) and their life stories. Their life struggles are indeed an inspiration for all of us, and I genuinely appreciate it.

My problem, however, is with the Humans of Bombay page and how they are ruining their hard-earned respect over the years by doing supposed paid propaganda for politicians. By doing this, they are joining the long list of Indian media houses which have been doing the same for years now.

It is about time someone knocked some sense into them and make them realize that even though this may earn them some money, the respect and fan following that they have earned over the years will take a hit.