When googled, “art” refers to ‘the expression or application of human creative skill and imagination, typically in a visual form.’

Art is a very important medium of expression and does not simply reduce itself to labels – anything and everything that helps express creatively is art. Anything, be it “The Starry Night” by Vincent Van Gogh, or weekly Garfield newspaper comic strips come under the plethora of art.

For years, artists have played a major role in introducing politically charged artworks since art itself plays a formative role in the constitution of social life (Frank Möller, “politics and Art”).

The study of art has immensely contributed to the discipline of history and offers a public or the common man’s view on political instances. Quite often reflecting the views of the society and not of those with power, art, more precisely political art, offers a peek into the lives of the common man.

Art Has Historically Been Political

As mentioned earlier, art has always been a medium to express opinions, even political ones. This practice can be dated back to the era of Renaissance, an art period dating back to the 14th century! Now famous artworks like Michaelangelo’s ‘David’ and Cellini’s “Perseus with the head of Medusa” were charged with political messages.

The unveiling of David in fact attracted many protests because of its message regarding the exile of the powerful Medici family who had been exiled from Florence. 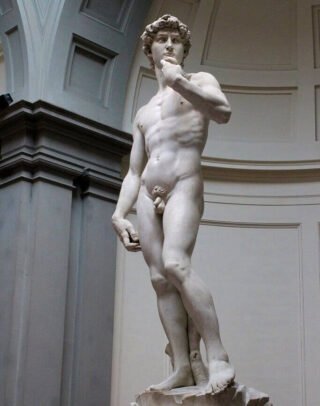 Initially, art was seen as a movement of resistance against those in power, the church, and the nobility, especially when considered in the context of European historical art.

Historically it can be seen that much of “popular art” was traditionally patronized by the wealthy and the powerful aristocrats, and thus using the same medium as a means of resistance then gave art a new meaning and purpose, that of communication.

While much of Renaissance art catered to the aristocracy, other art periods slowly began to integrate resistance into art as well. While political messages were highly criticized earlier, art movements in the 19th-20th centuries saw a much larger involvement.

In the early 1920s, the Dadaism art movement in Zurich took charge, developing in reaction to World War 1 – a group of artists who rejected prevalent capitalistic endeavors and exhibited anti-bourgeoisie sentiments. The reactionary art that spurned in the process is among the earliest art movements that created an impact.

While the movement eventually died down after creating a charged atmosphere, it should not be ignored that political art in itself helps to leave behind a legacy. In fact, the art technique of collage making was developed because of Dadaism.

The usage of art especially flourished during (what literary theorists endearingly term) the postmodernist era. Postmodernism is a broad movement that began roughly in the mid 20th century, which was an effort to criticize the knowledge passed down with Enlightenment. People at the time began questioning prevalent ideologies, promoting a more inquisitive mindset.

While artists and activists made use of art to express their political opinions, comic books on the other hand emerged as another form of literature (heavily based on art) that mainly propagated ideologies. Michael Uslan, a professor of comic book folklore mentions how during the period of the World Wars (early to mid 20th century), American comic books played a major role in constructing war propaganda and influencing the young readers. Narratives urged people to buy war bonds and viewing Nazi supporters as inhuman antagonists. Interestingly, everything was expressed through art. 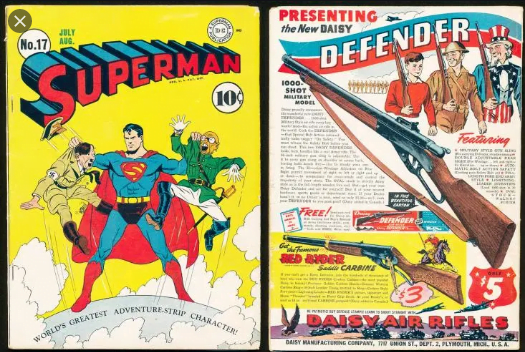 Political Art In The Indian Scene

The artistic scene in India is very rich. As a country that inherits a vast cultural and ideological capital, one can see different varieties of art ranging from sculptures, paintings, caricatures, and architectural art.

Present artworks like Bhupen Khakar’s painting (1994) portraying homosexual sexual intimacy between a religious figure and a common man or the sculpture of Yakshi (1969) by Kanayi Kunhiraman in a small town in Kerala portraying a naked woman embracing her sexual desires can all be considered under political art – as they challenge the norms of the society and those ideologies that are popularly prevalent.

Art is inherently political, be it intended or not. Indian artwork also reflects the presence and the dichotomy of the brutal caste system that has contributed to making lives miserable for many across the years.

Mithila art, also known as Dalit art has historically evolved as a mode of resistance and protest against caste discrimination – representing issues of domination, discrimination, and oppression faced especially by Dalit women.

Gaining momentum in the 1970s, Mithila artwork also provided a source of income for marginalized Dalit women, as they embraced art as their means of expression.

These are obviously just a few of many, many examples of art that has historically been seen to be very politically charged. Today, with the advent of digital art, artists have found a safe space on the internet, newspapers, and magazines to express their opinions through art.

Post-internet art often refers to art that is generally made for audiences on the internet. Today, Instagram and Tumblr have become the primary galleries to feature political art across the world. It can be said that as a medium, the internet is a much safer space and artists enjoy certain liberties today that traditional artists did not essentially have.

Digital Instagram art pages like ‘jamun_ka_ped‘ claim to be a ‘webcomic of dissent’ creating art explicitly based on the political contexts of the country. Other pages like ‘green_humour‘ talk about the environmental problems that humans mainly contribute to. Artists like ‘bakeryprasad‘, have taken it upon themselves to educate followers about caste oppression in India while also talking about events that often go unheard due to media bias.

Artists like ‘appupen‘ often use their art to show their dissatisfaction with the government, and at a time where mainstream media houses are no longer considered to be bias-free, it is the onset of these artists that has enabled the viewer to engage with different political opinions.

Grafitti has also been considered to be ‘rebel art’ across countries. Almost always political, graffiti art is seen to be rawer and more direct, and while graffiti also includes promotions of political parties during the election season, the art form is extremely political as it directly and unapologetically aims to influence the opinions of the viewer.

While these artists talk about things that are not implicitly very theoretical, these modern artists have contributed a lot in bringing art closer to the people, especially by making it political.

While in the Renaissance period, art was mainly available to the aristocracy, today we can see those popular modes of art are very much dependent on the consumption by the common man.

It can be said that political art is an essential feature of democracy – it allows us to critique and actively engage with the happenings of the country and opens us up to different opinions that might help further our knowledge.

But more importantly, the existence and proliferation of political art is a key feature of the presence of the freedom of expressing opinions.

Undoubtedly, art has evolved as a means of communication rather than just artwork that is pleasing to look at. Art has successfully been able to integrate expression and opinion with a creative outlet. Besides critiquing specific power structures of the art world, new forms are emerging and many people respond to the cultural and political climate of the nation through art.

IN PICS: WHAT ARE CRYPTO-ART DIGITAL COLLECTIBLES?