The moment our WiFi stops working, anger and anxiety follow inevitably, especially when we have tons of deadlines approaching. But on those ‘chill’ days, when we are just casually browsing, ‘No internet connection’ sometimes titillates us.

By now, I am sure you would have guessed what I am talking about. Well, no brownie points for guessing, it is our age-old T-Rex (Google Chrome Dinosaur game or as we call it the No Internet game).

If you also like playing this game, you cannot miss out on a similar browser-based game developed by a Reddit user.

Ever since the PM CARES Fund has been set up, there have been various concerns regarding its opacity. Since the fund is not audited by the Comptroller and Auditor General, there are various questions around the conflict of interest and transparency.

A Reddit user developed a satirical Modi-themed game, poking at the opacity around the fund. On Sunday, the user posted that he bought a domain named “pmcares.fund” and made a fun game on it.

In less than a day, the game has seen an overwhelming response. 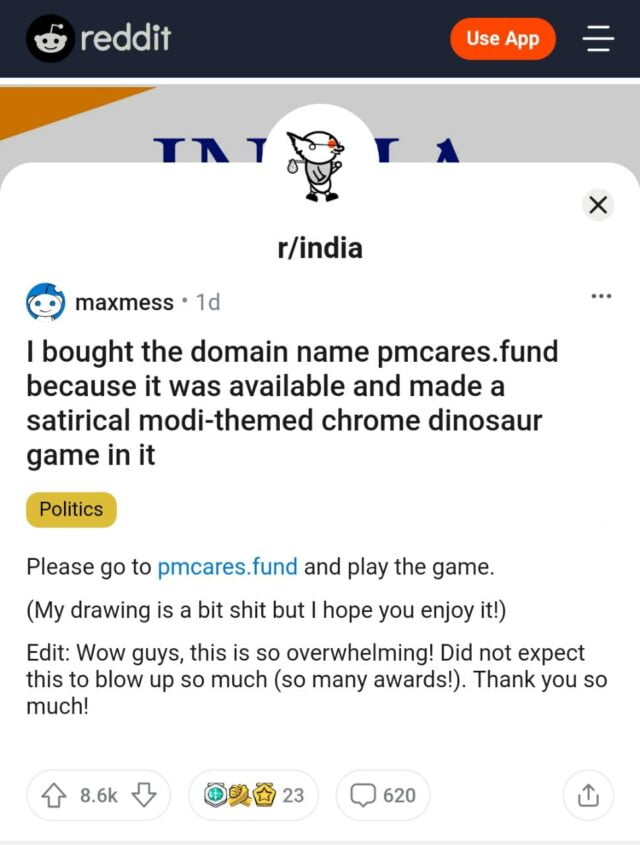 Distinctive Characteristics Of The Game

As soon as a user lands on the website, there is a pixelated depiction of Prime Minister Narendra Modi. The game proceeds in a similar fashion as the T-Rex game where the user can make the dinosaur jump over obstacles by pressing the spacebar.

In this game, the user can make the Prime Minister jump over the obstacles. The obstacles depicted in the game include representations of media, judiciary and of course, the novel coronavirus. 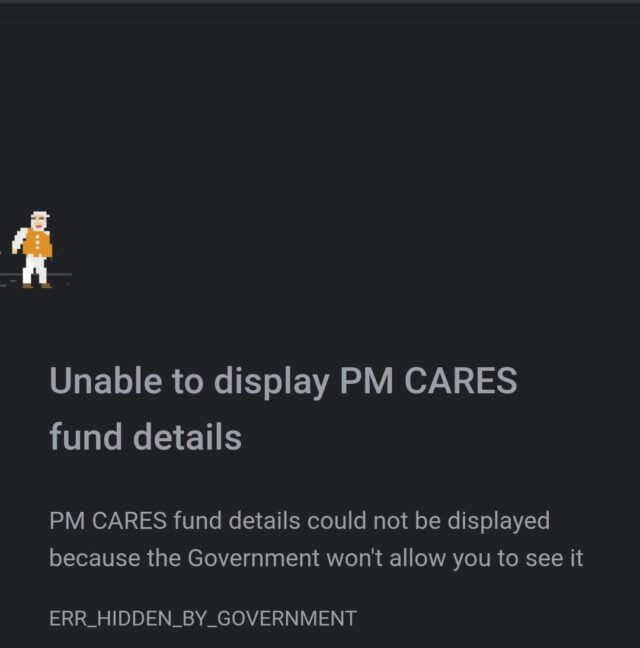 Not only this, an error message stating “PM CARES fund details could not be displayed because the Government won’t allow you to see it” is also displayed on the screen. This is followed by the error code “ERR_HIDDEN_BY_GOVERNMENT”.

Unlike the Game Over screen displayed by the typical T-Rex Game, this game displays different messages for every obstacle. For example, when a user hits a judiciary obstacle, the game displays “GAME NOT OVER. Supreme Court gives a free pass. Please continue”. 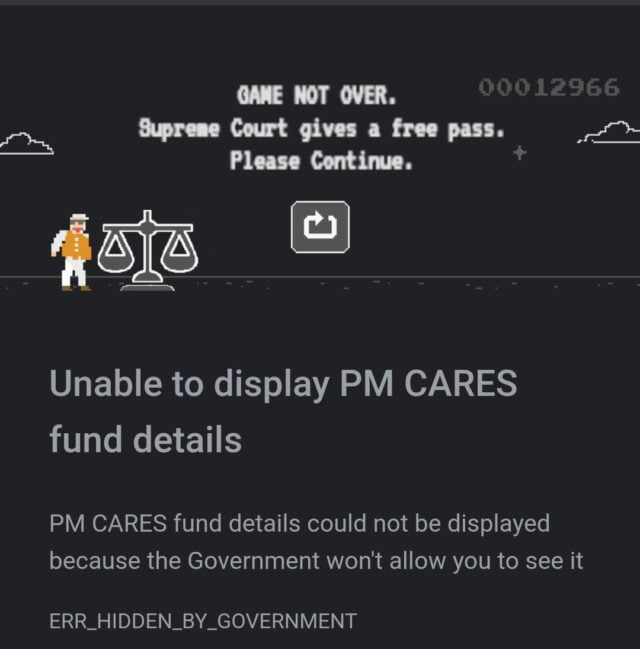 When a user hits a media obstacle, the game displays “GAME NOT OVER. Media has no questions to ask. Please continue.” 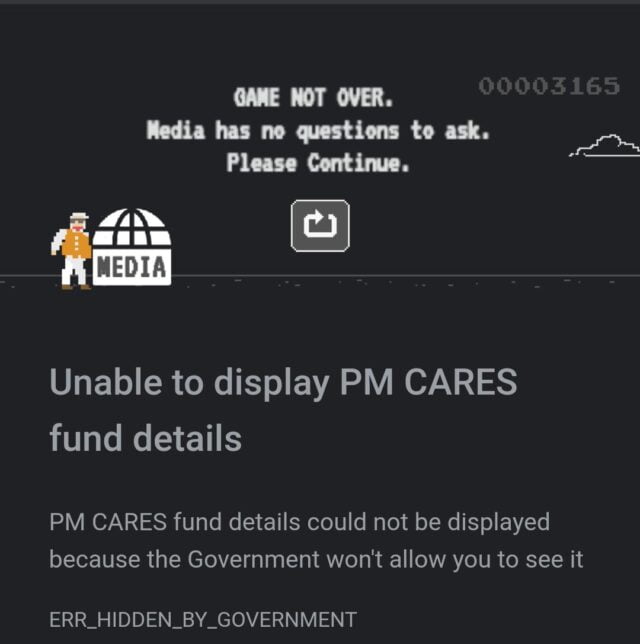 When a user hits an obstacle depicting a distressed economy, the game displays “GAME NOT OVER. ↓ Jobs ↓Economy. All Good. Please continue.” 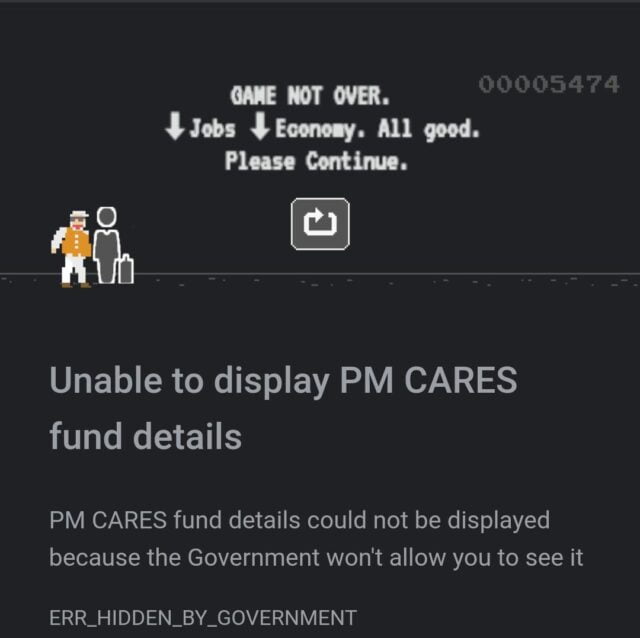 When a user hits the COVID-19 symbol, the game displays “GAME NOT OVER. ↑↑ COVID19 cases. No problem. Please Continue”. 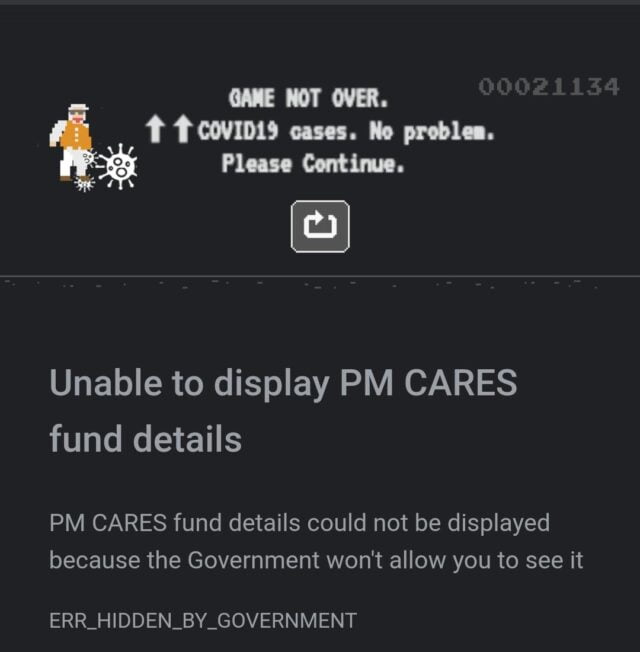 While the game is hilarious, it hints at some serious concerns regarding our economy. It is high time that we and the government act upon these before it is too late.