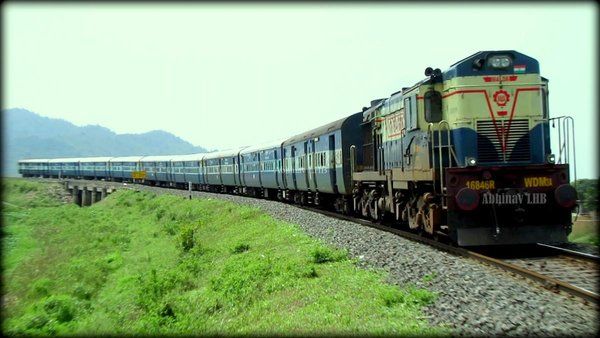 The planned railway from Tetelia in Assam to Shillong in Meghalaya, via Byrnihat, is both a blessing as well as a nightmare for the people. There is an upside as well as a downside to the project and here is a general overview of a few of these:

The proposed railway line will improve the connectivity of the region. Businessmen, farmers, and other travellers travel back and forth between Shillong and Guwahati for various reasons. The most common mode of transport is the highway. Many locals and tourists travelling through the winding road would testify to the often nauseating journey. No, it is not always a smooth ride. Hitherto, the highway and airway were the only available modes of transport between the two states. Both of which, are not always pleasant. The weather conditions in Meghalaya are such that, carrying an umbrella is a necessity. The unpredictable weather conditions thus make travelling through these means dangerous. Also, the airport at Umroi, which is 30 kilometres from Shillong, is almost always dysfunctional. The railway line would thus save a lot of time and energy while travelling.

Also read: A Mystery From Tripura That You Might Never Have Heard About

On the developmental front, while the rest of India is progressing rapidly, reaping most of the benefits of the government’s schemes and projects, the corresponding situation in the Northeast is abysmal. The railway line will be a step towards this progress. With the improvement of connectivity, it would make the transaction of business easier. In addition, it would be a blessing for farmers, like the rains after a drought as it would improve the mode of transportation of their goods, reduce wastage and potentially expand their market. Thus, the project would boost the economy of both states. While the proposed railway line appears to be a blessing, there is also a downside to it.

Firstly, there is the people’s fear of an influx between the two states. Similarly, rampant unemployment, lack of investment and opportunities, has stirred concerns that the proposed project would only intensify these issues.

The project also poses a threat to the environment. The construction of the railway line would lead to large-scale deforestation, which would be harmful to the local ecology. The erratic weather conditions in both states, serve as a reminder of the rise of global warming. The Northeastern region through the Northeast Frontier Railway is slowly but gradually developing. Soon, there will be railways connecting all the Northeastern states together and with mainland India as well. It will make travelling from one end of India to the other end easier and more convenient.

But what comes after this? Tourists flock to the hill-stations every day and more so during summers to escape the heat, but with the rising trend of buildings that are gradually replacing the green land, in a few years’ time, will there be any safe haven to escape from it? Progress is both good and bad. It pushes the country forward and closer towards becoming a developed nation. But all of this is done at what price?