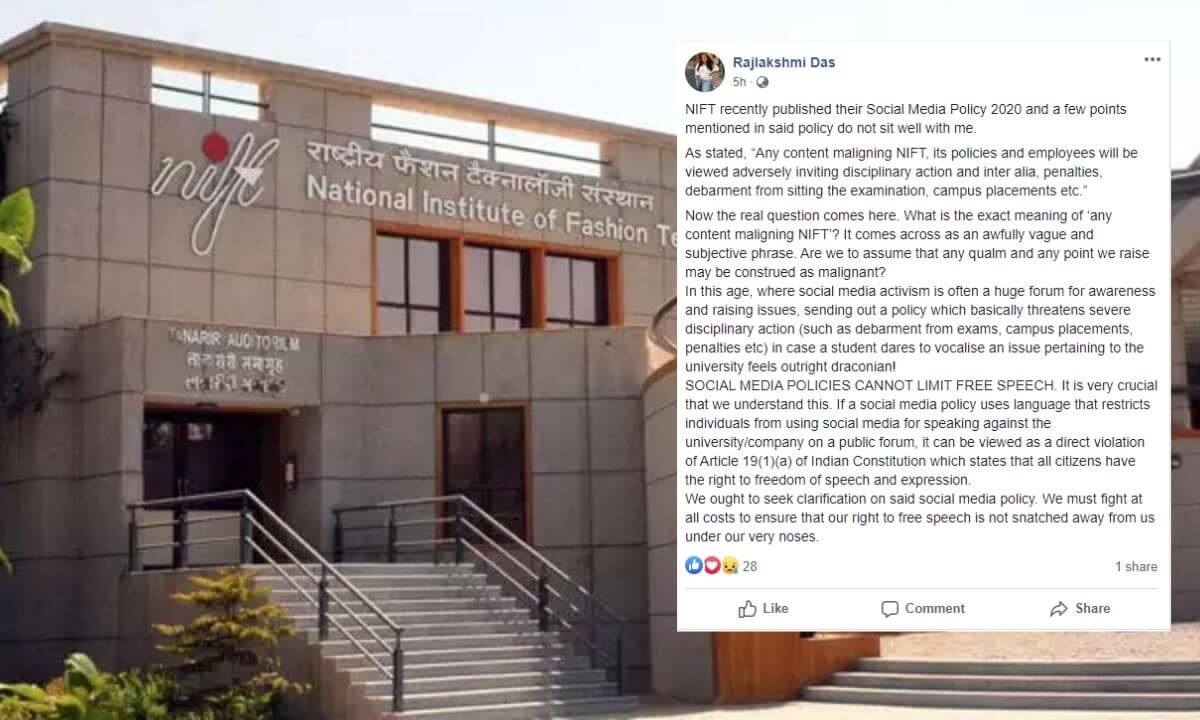 Censorship of anything becomes a cause of concern once it starts to encroach on one’s right to freedom of speech and expression.

As a way to curb fake news and create fear around posting and spreading of such content, censorship to an extent is not altogether bad.

But at the same time, it should not be a way to attack and punish innocent people or those who raise genuine concerns about any wrongdoings that an institute might be doing.

A notice from the National Institute of Fashion Technology (NIFT) has been making the rounds on social media. According to this, the institute has brought about several new rules regarding the use of social media by students and the repercussions they could see if they break them.

This has caused concern to many students who believe that nothing good can come out of these rules.

What Has NIFT Done?

NIFT is perhaps one of the most sought after fashion colleges in India, getting a seat in any of its many branches is seen as a big deal.

On Thursday, 16th July 2020, a student of the college called Rajlakshmi posted this on her Facebook page:

One part she mentioned, in particular, was how the university can take strict action if a NIFT student posts content on social media that can malign the college.

In the notice it read:

The vague usage of the term “any content maligning NIFT” is a cause of concern since this could also be misused against those who are using social media to bring light to some wrongdoing that might be happening at the college.

Read More: CBSE Doesn’t Want Students To Learn About Secularism And Citizenship During The COVID Year: But Why? 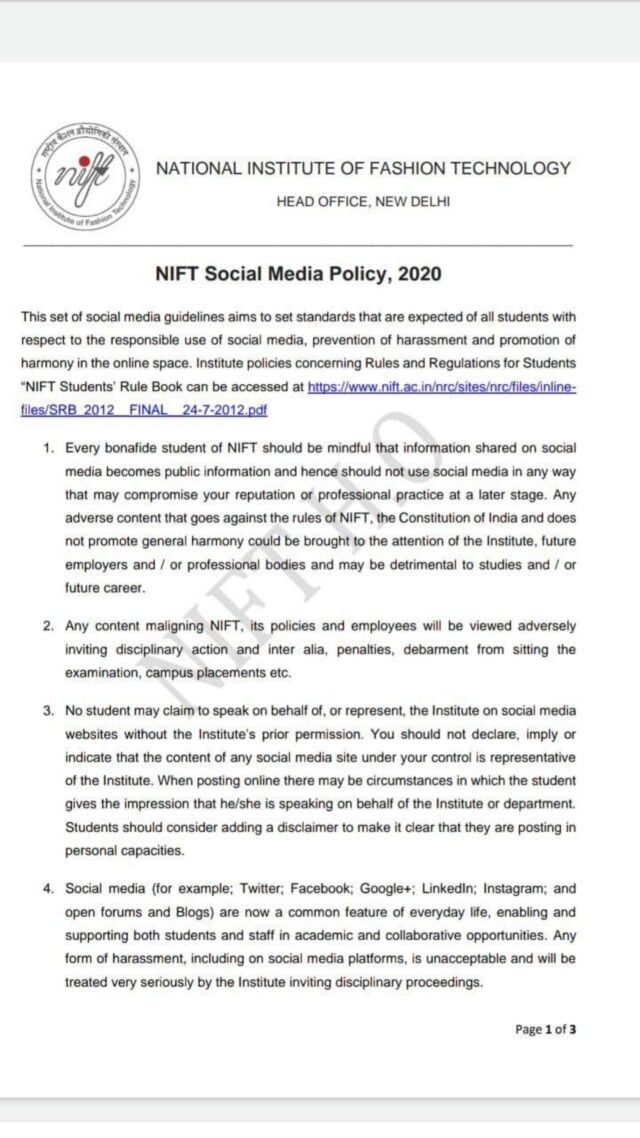 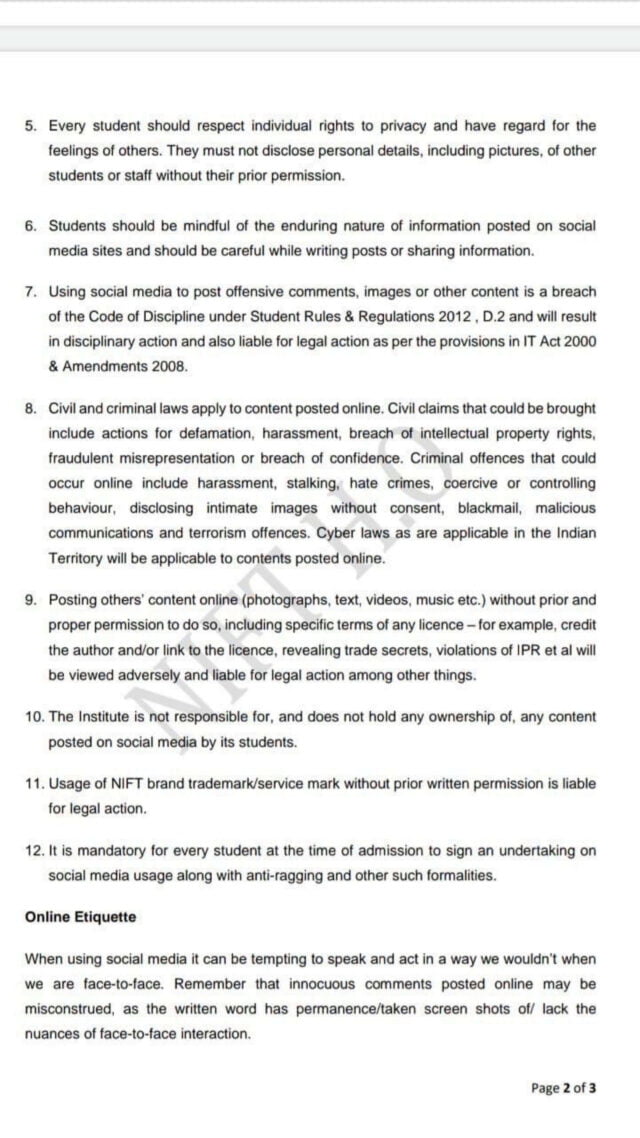 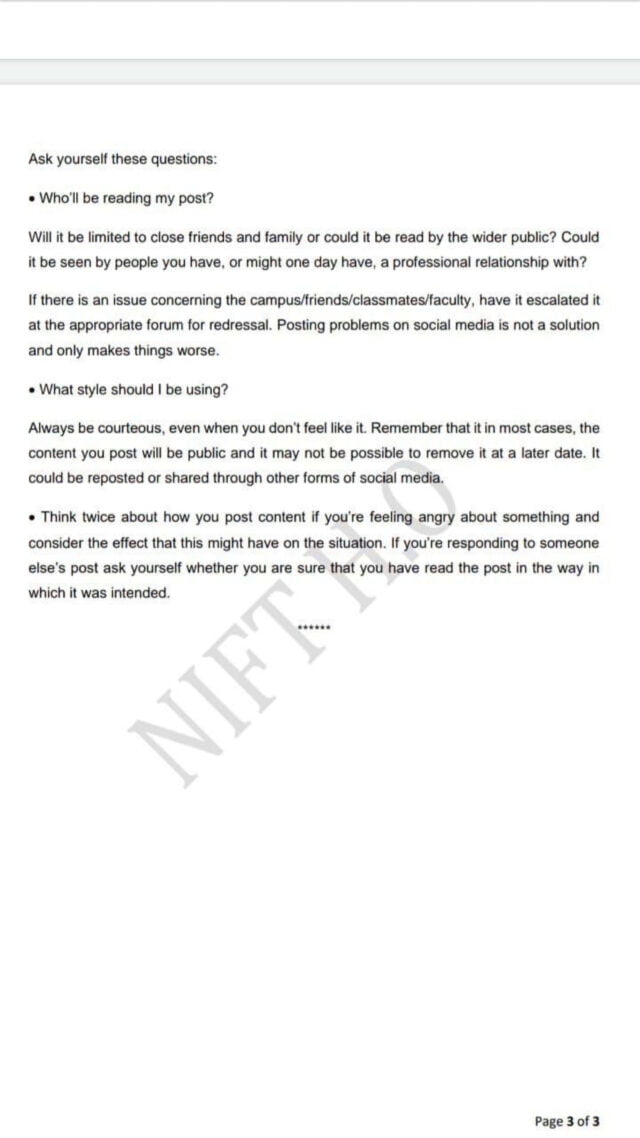 Some people have also spoken about it on Twitter raising concern on the wording of that one rule and how it can be used to silence any dissent against the institute. 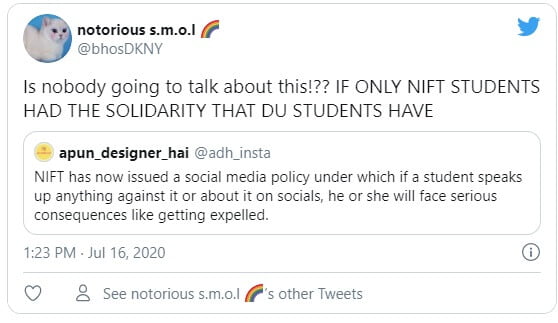 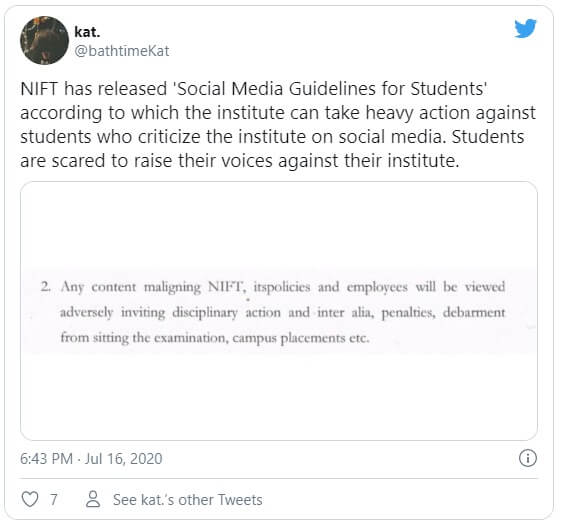 NIFT has not given any statement about this notice and how authentic it is. When I tried to visit the link as mentioned in the notice it just showed as ‘page not available‘.

Frankly, this is not the first time that NIFT and its management have tried to silence people who were speaking out against it.

Just last month, its Hyderabad campus had reportedly fired around 56 employees of the housekeeping department after they had accused D. Srinivas Reddy of sexual harassment.

As per a report from Firstpost, the workers accused Reddy of sexually abusing them and using sexual expletives and connotations when speaking to them. They said that he had been doing this for almost a year.

These women were fired just a day after around 13 NIFT staffers had conducted a protest against the inaction of the college’s management regarding these complaints against Reddy.

Reddy, a stenographer who has been employed with NIFT for almost a decade now, still keeps his job with no ramifications.

A report from The Wire also revealed that one employee, Ratna Kumari, had filed a police complaint against Reddy back in 2018. She had stated that he would touch them without their consent and ask to have intercourse with him.

A few days later, it did come out that NIFT had reinstated the employees back under their employment. A female staffer who was among the 56 fired had reportedly been quoted by The News Minute as saying, “As of now, our jobs seem to be safe. But none of the authorities from NIFT have approached us yet. We have learnt that Srinivas Reddy is also here and is currently in a meeting with the director.”

If this notice is really true then it is an outright breach of one’s freedom of speech and expression and can be misused very very easily.

Why Is IPU Conducting Viva Exam Despite Delhi Government’s Notice Announcing No Exams?