Our name is a big part of our identity, not only is it very personal, but is deeply connected to our culture, religion and place of birth.

Many times a lot of your details can be obtained from your name itself, but there is also judgement that comes with it.

Most often, it is the repressed and minor groups who have to suffer through this judgement, and perhaps the biggest example of this would be those who have Urdu names.

Fear, distance, judgement, and prejudice are all words that can be used to describe people’s reactions on getting to know someone with an Urdu name.

But we seldom understand exactly what the other section is going through, until we actually experience the judgement and abuse ourselves.

Which is exactly what happened with a Twitter user @deepsealioness aka Prabha Raj who got bashed and trolled after she decided to translate her Hindu name into Urdu and add it to her Twitter username.

Prabha after adding that little bit of Urdu in her username instantly was bombarded with hate speech and sexually explicit language.

And all this was simply due to the assumption that she was a Muslim, since why else should she have Urdu script in her name, if she was Hindu.

It couldn’t possibly be because she actually liked the language and script, or that she wanted to show her admiration and love for Urdu on her personal social media. Duh!

On 6th January 2019, Prabha posted this on her Twitter:

Sexually graphic abusive memes & being called sister or mother f*cker is what am subjected to in last few days bcos I’m using my “Hindu” name in Urdu. It doesn’t matter who you are,if your name is assumed to be a Muslim,you get the worst trolls

Not changing the name, FU trolls

In this thread, she also talked about how she was not going to be intimidated by bullies and will keep her Urdu name on her Twitter profile and seeing her determination, several other people also started to change or add their name in the Urdu script to their Twitter usernames.

Where Did #MyNameInUrdu Come From?

To show their support to Prabha and her brave act, several people not only changed their names on Twitter, but some also started to use #MyNameInUrdu in their tweets.

From there it created a flurry of people not just changing a mere Twitter username, but sharing personal experiences of what happens when other people realise they have an Urdu name and are thus Muslim.

This story that a Twitter user apparently shared with Prabha recounts how merely just saying their name can drastically change how a person behaves with them. 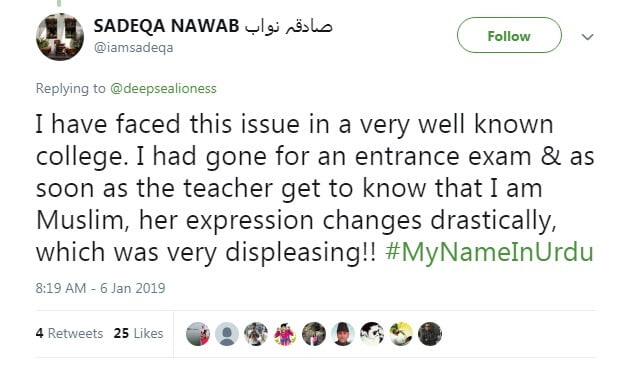 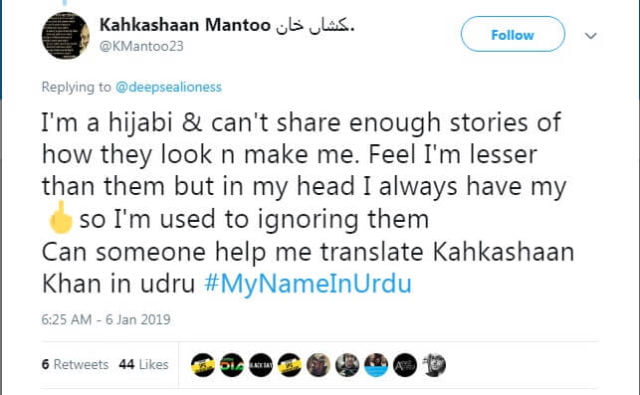 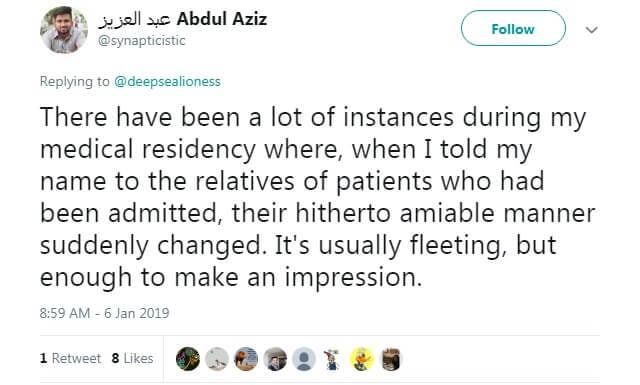 While they might be cordial, polite even friendly in the beginning, one simple detail about the other person can instantly trigger their internalised prejudice.

The hashtag soon enough became almost a movement, to change how those of a certain religion are perceived and to do away with the bigotry of it all.

A lot of people congratulated the original poster (OP) and showed their support with this movement: 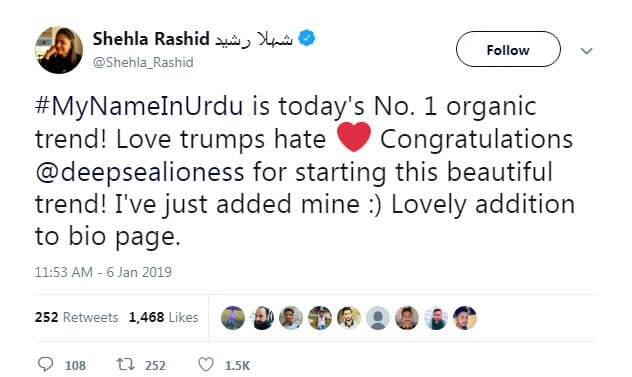 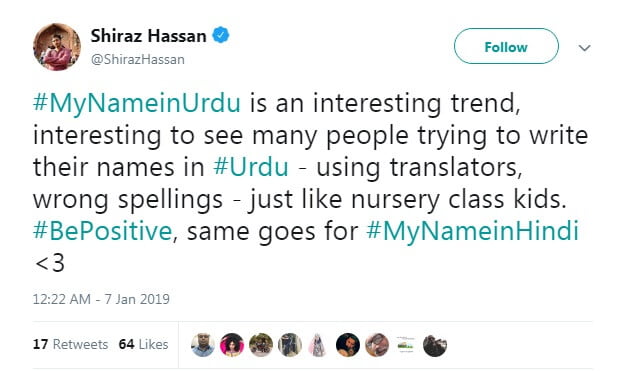 Read More: Why Do We Tease Our Muslim Friends For Pakistan Support During Ind-Pak Cricket Matches? 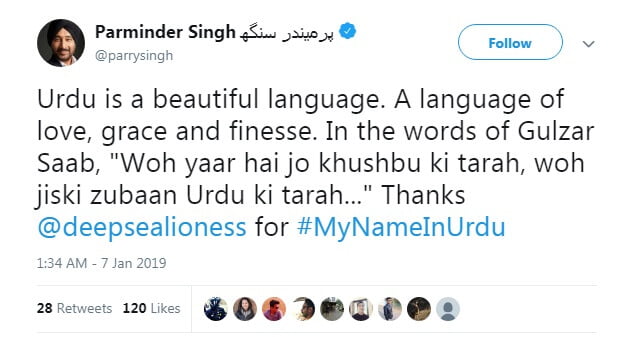 Here "Sri Ram" is written in Urdu. Any problem?#MyNameInUrdu pic.twitter.com/EfsYEAx6Cv 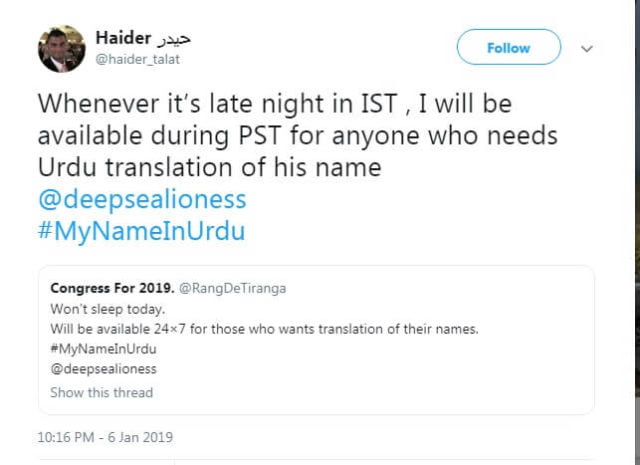 In a piece for The Wire, Prabha Raj explained about the movement and even mentioned how certain Pakistani people or those with traditionally Urdu names added the Hindi version to their Twitter handle to show solidarity and brotherhood. 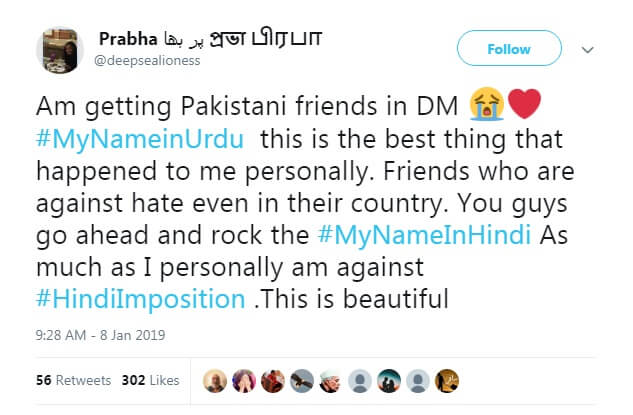 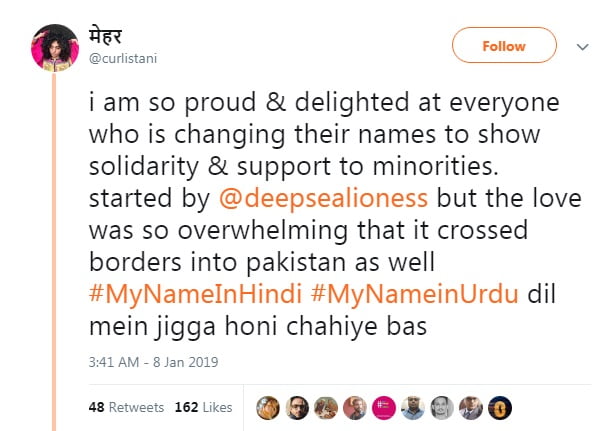 ⚡️ “India responds to abuse, bigotry with a movement of love #mynameinUrdu” , made possible by @deepsealioness https://t.co/rvGa7sYUyJ

Besides this, people also shared personal stories of how they might be connected to the Urdu language and that it transcends any border and religion. 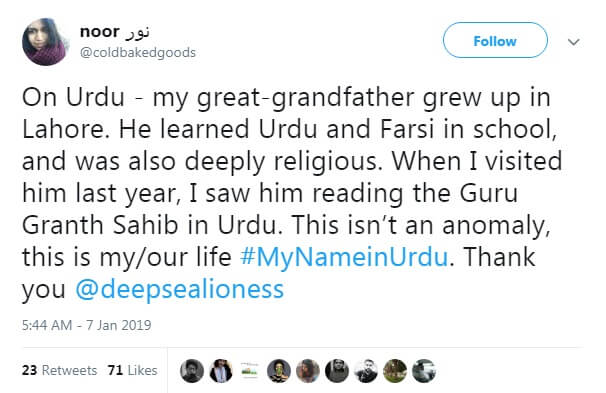 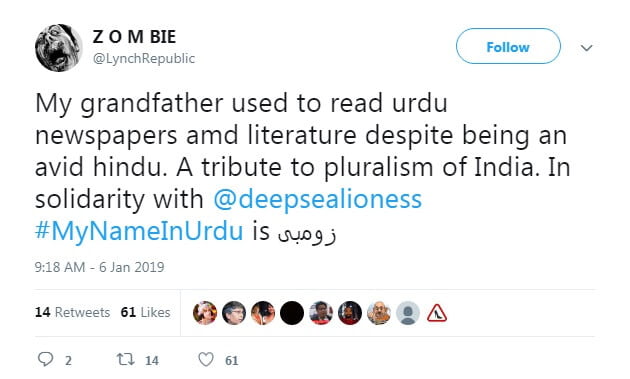 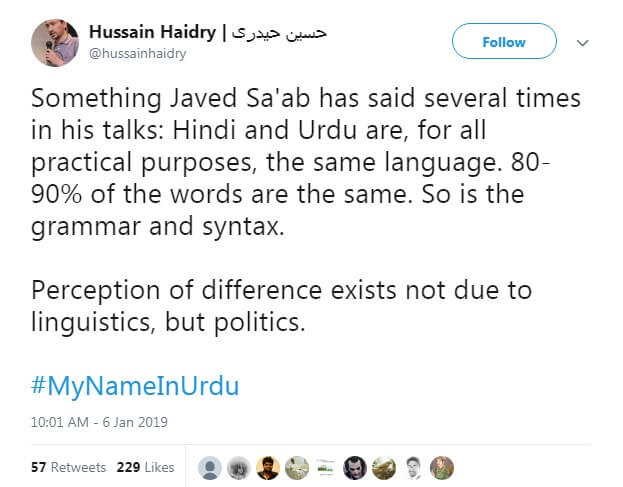 While it was disappointing to see how deeply stereotypes are embedded in people to judge based solely on their name, this ‘movement’ almost created a healthy atmosphere on Twitter of brotherhood and community.

It also made people aware of the other side and what they have to go through, and will perhaps allow for more sensitivity in the community.

Let us just hope that this is not just a trend for a few days and will see some long-term changes come into our country and society.

Urdu Is Part Of Hindustani: Delving Into The Rich History Of Urdu