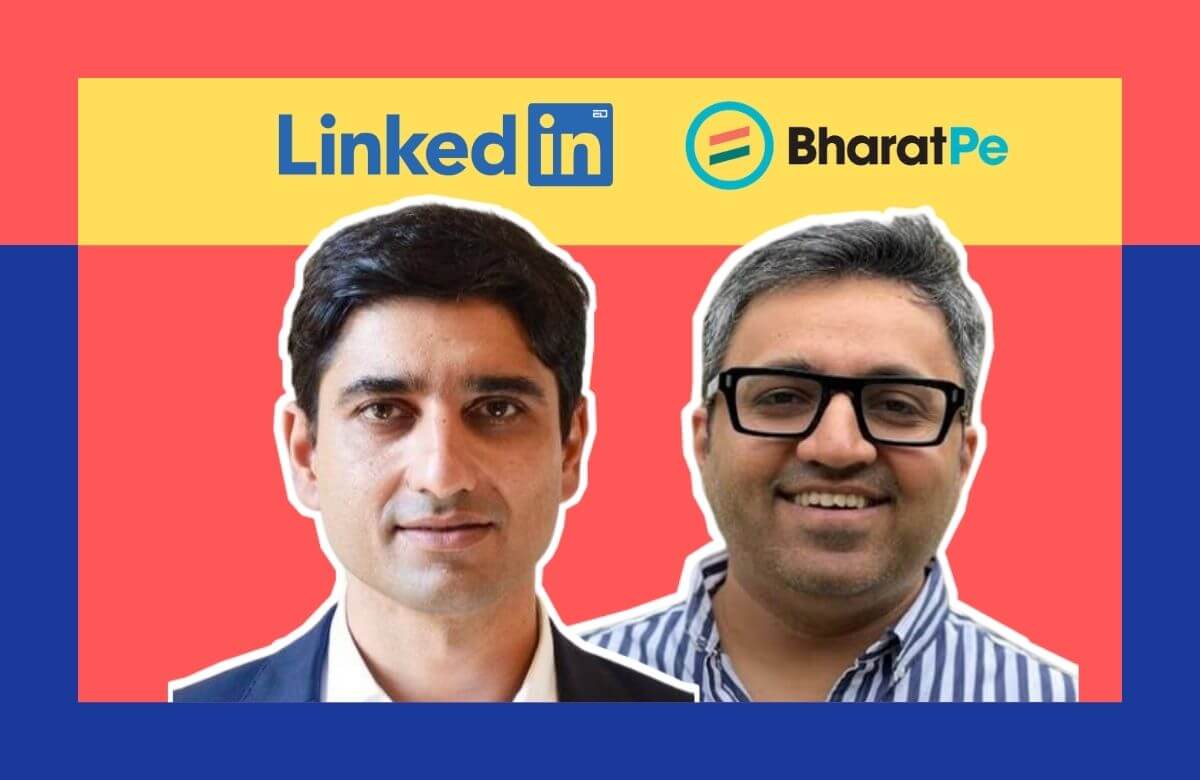 The drama surrounding BharatPe the fintech company and its former Managing Director and founder Ashneer Grover just seems to never die down.

Just like a controversial and public relationship break-up, every day there is something new that comes to light, making the whole issue even more of a mess than it was.

On 1st March 2022, Ashneer Grover resigned from his company after many days of controversies and issues coming out regarding him. One that got a lot of attention was his altercation with a Kotak employee and an audio clip emerging of him abusing the person for not getting Nykaa IPO share allotment.

Post that Grover was put on a voluntary leave from his office, with BharatPe’s management eventually taking issue with Grover and his lifestyle. The company first started to distance itself from Grover before eventually starting an investigation into him about fraud and misuse of company funds.

This eventually resulted in an extremely public and ugly confrontation between Grover and his company with both parties mudslinging the other with Grover keeping no holds barred about his feelings on the resignation and BharatPe as a company and the company too engaging in same.

In another case, some more drama occurred in the comments section of a LinkedIn post with Suhail Sameer, the company’s current CEO and co-founder, and Ashneer Grover’s sister both coming into the battlefield.

What Happened On LinkedIn?

Karan Sarki, a senior IT associate at BharatPe as per their LinkedIn profile on 6th April 2022 posted about not having received their March salary till yet despite having followed up multiple times. They also added that the company has been spending the employee’s money for its own petty cash and that their reimbursement bills pending since December have still not been cleared.

“Dear Suhail and Shashvat Sir, we haven’t received our salary for March month yet despite following so many times on email and visiting the office. All the old admin staff of BharatPe has been terminated by you without giving any reason and their salaries have not been paid.

We were with BharatPe ever since the Compamy started and now we are nowhere because of your internal politics. We are poor people and have our houses to run, small kids to take care of.

We have been spending our own money for company’s petty cash and our reimbursement bills have not been paid since December. All the staff of BharatPe is enjoying office paid trip to Goa and we engraved employees are fighting for their salaries and job. What kind of leaders you are. 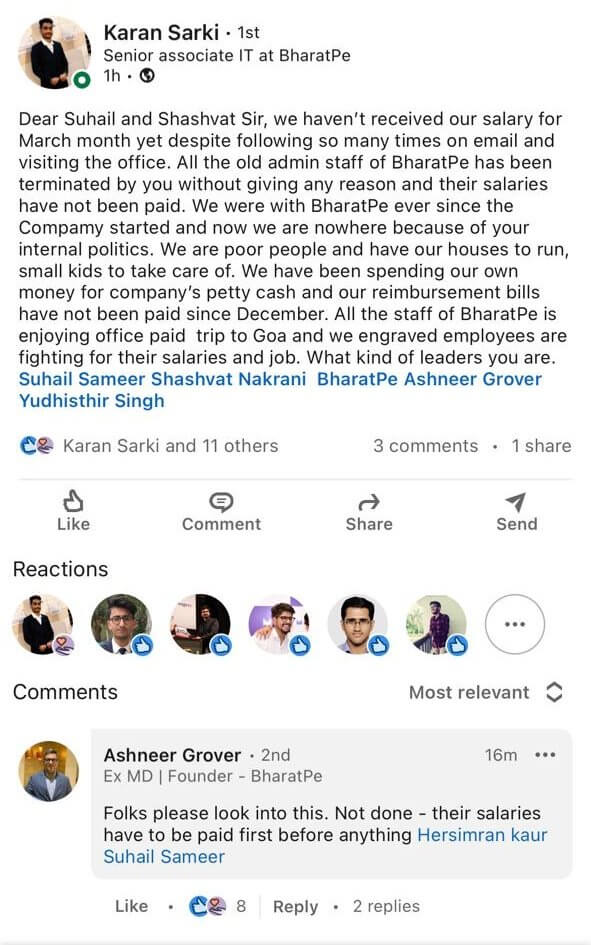 Read More: BharatPe’s Founder Ashneer Grover Gets Investigated For Fraud By Company, Rumor Mills Talk About Him Getting Fired

Ashneer Grover then commented on this post and stated that “Folks please look into this. Not done – their salaries have to be paid first before anything” tagging Hersimran Kaur and  Suhail Sameer.

Aashima Grover, Ashneer’s sister, then replied to a comment that shamed the top management of the company writing that “That’s the sad part… That’s it’s a shameless bunch!”

To this Suhail Sameer replied to her that “Aashima Behen – tere bhai ne saara Paisa Chura liya. Very little left to pay salaries. (Aashima sister, your brother stole all the money)” Ashima also reverted to this saying “Suhail Sameer ohh really. but still money is left for your ESOP, bonus, increment, parties and offsites. and not to forget paid media.” 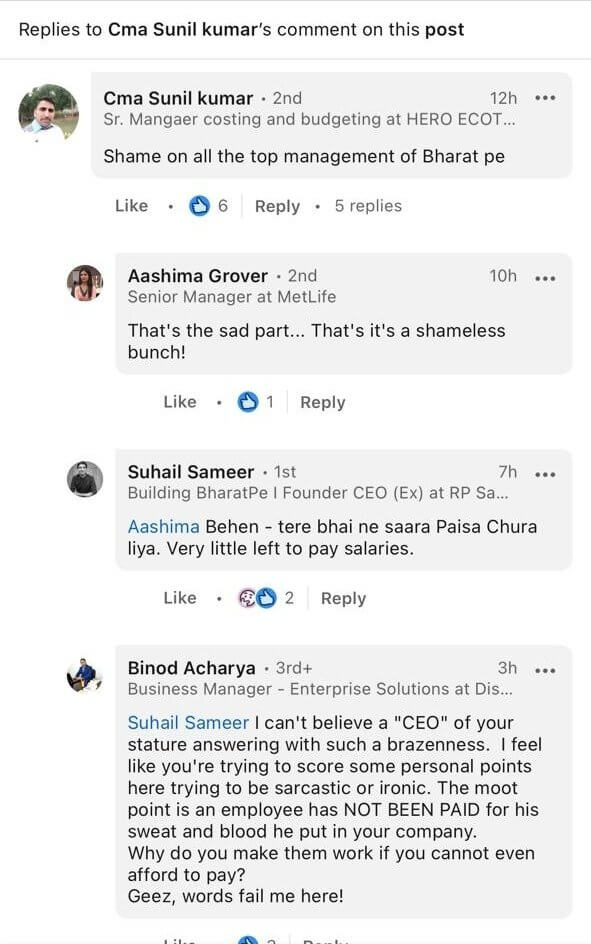 Another user Binod Acharya called out Sameer’s reply and stated that “I can’t believe a “CEO” of your stature answering with such a brazenness. I feel like you’re trying to score some personal points here trying to be sarcastic or ironic. The moot point is an employee has NOT BEEN PAID for his sweat and blood he put in your company.” 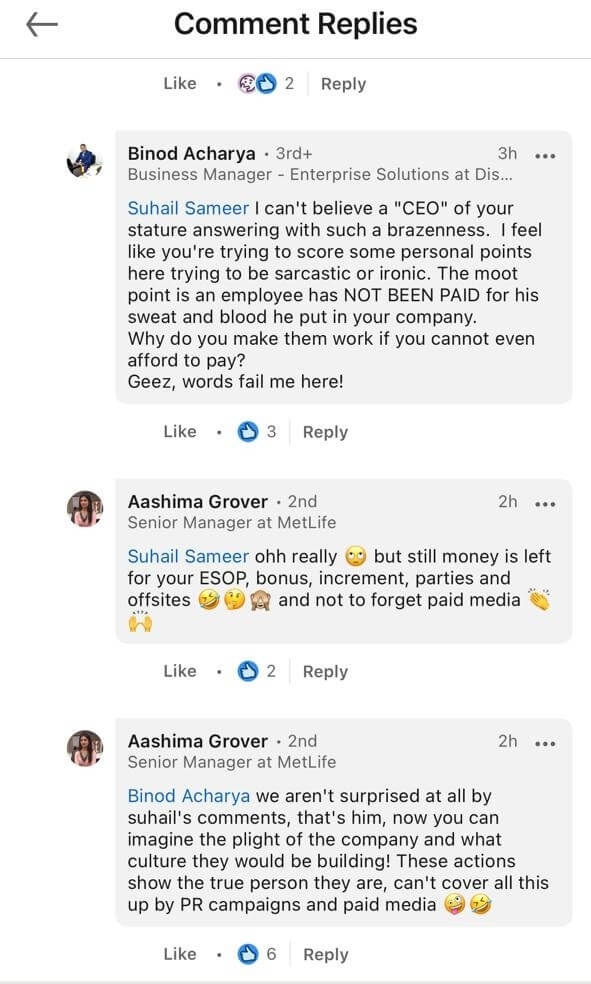 Which, honestly is a very correct comment. Sameer instead of directly addressing the employee’s very valid concerns and difficulties chose to engage in unnecessary mudslinging and sarcastic comments about Grover.

ResearchED: The Filmy Rise And Fall Of Ashneer Grover