Jan 3, 9:59 PM, the air in my room gets tense, as I wait with bated breath, and count the final seconds prior to the first episode of the 3rd season of Sherlock.  After the news of a speculated January 2013 release, the actual 3rd season began in January 2014, but definitely proved to be worth the wait for all the fans, who along with John Watson, wished that Sherlock were alive!

And so, the game was back on, and how, with ‘The Empty Hearse’! 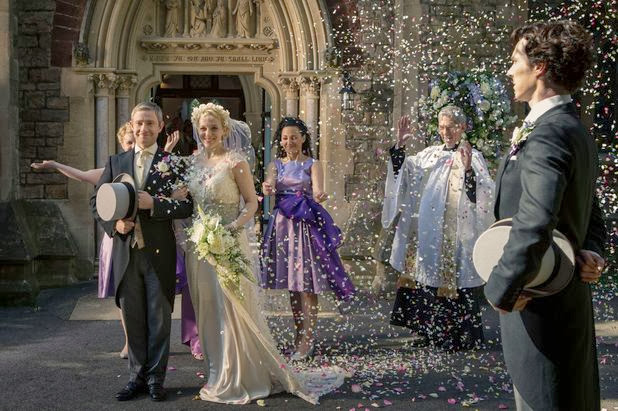 The season continues to get better with each episode, and ‘The Sign of Three’, which in my opinion, is the funniest episode so far in the series. It shows Sherlock in a more humane manner as John’s best man at his wedding. Most obviously, there is a murderer lurking somewhere… The ‘Three’ gets much importance, with

BUT, the highlight of the show is definitely John’s stag party, which involves Sherlock making sure that they drink precise volumes of alcohol using scientific equipment, in specific time periods, and even visit the loo according to a timetable! But the planning goes all wrong when John further spikes their drinks (if you can spike alcoholic drinks, in the first place), and the plastered duo end up at Baker Street, play the Post-It game and also attempt to solve the case of a personal nurse who had dated a ghost, all, in a drunken haze.

“Be careful what you wish for”, but if your wish is to see more of this fabulous show, I sincerely wish, from the bottom of my heart, that your wish comes true! Till then, it’s good to know that #SherlockLives.