The Cable TV Networks Regulation Act 1995 provides that, “No advertisement shall be permitted which promotes directly or indirectly production, sale or consumption of cigarettes, tobacco products, wine, alcohol, liquor or other intoxicants.”

This Act stripped the alcohol sector of its otherwise colossal revenues. The desperation to be remembered by the customers gave birth to surrogate advertising.

Surrogate advertising is used to promote banned products, such as alcohol and cigarettes, in the disguise of another product.

Some examples: Bacardi released a series of Blast music CDs, Officer’s Choice started advertising playing cards, Carlsberg introduced their own line of glasses in their advertisements, Imperial Blue released their line of cassettes and CDs, etc.

If 80% of the viewers understand the actual alcohol or tobacco product being advertised, should surrogate advertising be legal?

The problem is not with the existence or distribution of alcohol but with the message that is attached when alcohol is advertised directly and the audience pool of that message, which in the case of TV includes impressionable children.

When a surrogate advertisement is shown on TV, the consumer is merely reminded of the alcohol produced by that advertised brand through the promotion of, say their CDs, but with a direct advertisement of alcohol, the narrative sent out is more often than not, explicit and detrimental.

The point of advertisements is simply to help consumers decide what brand to choose while buying a product, but with the alcohol sector, advertisements are known to shape the entire youth drinking behavior.

Direct advertisements of alcohol consumption are presented with appealing themes where the drink is shown as a medium that can lead consumers to companionship, light-hearted enjoyment, sexual success, enhanced attraction, social validation, and popularity.

Apart from normalizing the consumption of alcohol, such advertisements also like to connect their brand with the consumer’s daring and sometimes aggressive behavior.

Since younger people usually look for these aspects in their lives, they are easily triggered by alcohol advertisements.

Direct alcohol ads encourage and glorify its consumption, and make the youth feel as if it is their sole trouble-free solution to everything.

On the other hand, surrogate advertisements let people attach their own interpretations and ideas to alcohol, which are born as a result of the direct influences in their lives, such as family, which are uncontrollable. Family helps them form a certain perception around alcoholic beverages, and their lectures are usually accompanied by words of cautious and safe drinking, which advertisements never talk about.

Related: Should Sale Of Acid Be Banned In India? Our Bloggers Fight It Out On The Question

Why is surrogate advertising essential for the alcohol sector?

The alcohol market form is that of an oligopoly, characterized by few large firms selling differentiated products. The selective firms constantly vie for market share and the level of interdependence and competition among them are exceptionally high.

A great deal of money is spent on promotion through media advertisements, billboards, event sponsorships and online and offline campaigns. The cutthroat competition incentivizes each firm to make their alcohol better than the other.

But what happens when the government cracks down on the promotion of alcohol?

Alcohol companies are left with no incentives to innovate, refurbish and better their products and brand strategies regularly. The ‘spirit’ of improvisation dies a sad death.

In this gloomy situation, surrogate advertising acts like a ray of hope, inspiring alcohol companies to keep bettering themselves, by offering them an avenue to present themselves in new innovative ways and expand their customer base.

Maintenance of quality standards is more than important in the alcohol industry because even small discrepancies in the mere composition of the mixtures can prove to be fatal. Some brands of alcohol are known to contain alarmingly high amounts of ethanol, which can prove to be poisonous and has been responsible for the deaths of uncountable farmers and rickshaw pullers.

Alcohol companies are bringing in new and impressive ways to market themselves.

A Bacardi House Party Sessions Hunt For Talent was organised and it came to a close with finalist Ritviz Srivastava’s launch of Udd Gaye as part of the final playlist. The event, which provided a platform for young and talented budding artists to showcase their musical abilities, was brilliantly co-hosted by All India Bakchod, Nucleya and Bacardi.

Samuel Adams, a famous American company, known for its beer, is a sponsor for The Music Run, ‘the only timed 5k and 10k running series pumping the ultimate running playlist every step of the way’. The Music Run is the combination of a run and an authentic music festival in LA. 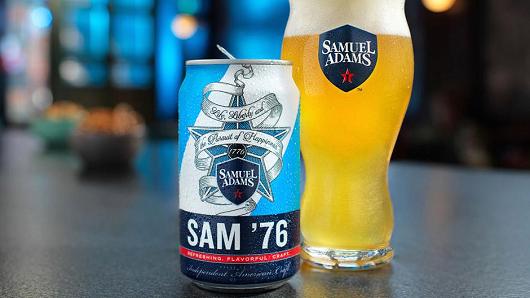 Mexican beer brand Modelo Especial for the past three years has been partnering with artists to create glassware that reflects its heritage of craftsmanship and artisanal qualities. Dubbed the “Modelo Especial Real, Authentic Craftsman” contest, the program takes place in 9 markets including Boston, Chicago, Los Angeles, Miami and New York City, thus encouraging a culture of art and heritage.

Companies like Carlsberg and Officer’s Choice provide employment to small and medium enterprises who manufacture their drinking glasses and playing cards for them respectively. These smaller units make substantial profits by capitalizing on the popularity and premium customer base of large alcohol companies.

These are just a few examples of the culture that is promoted by surrogate advertising. Many more surrogate ads are using beautiful themes that help in the creation of a community that is more and more global; a community that stays fit, enjoys music and appreciates art and culture.

Is Third Wave Feminism Applicable In India? Our Bloggers Battle It Out On The Question!