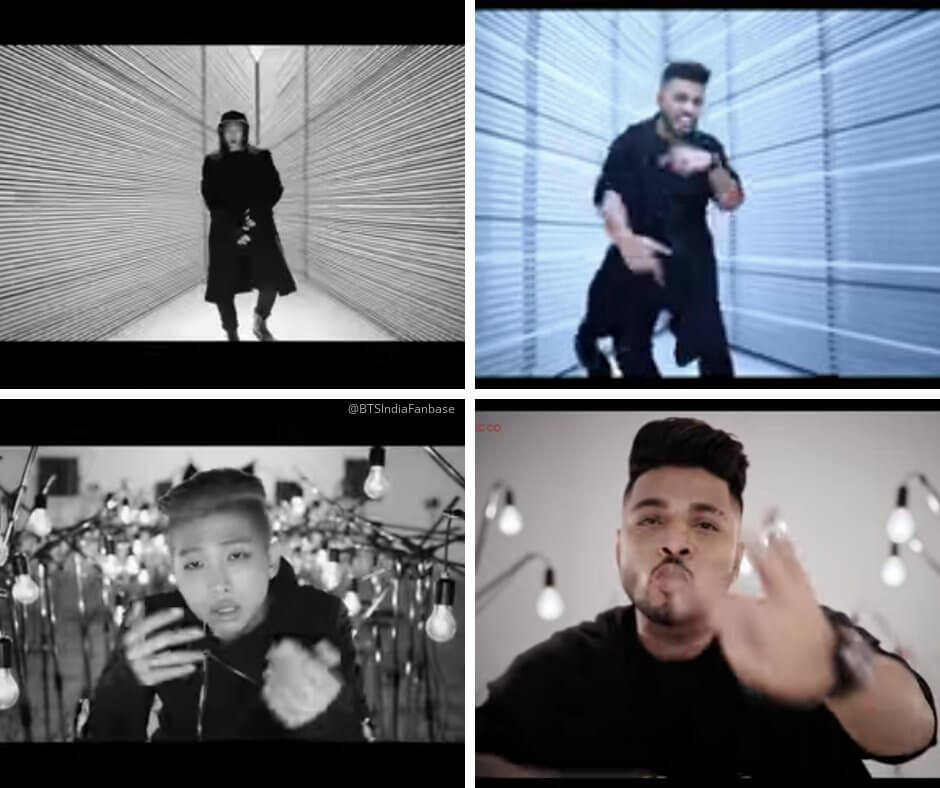 The latest song of the upcoming film Manto, starring Nawazudding Siddiqui has released and is making a lot of chatter in the music sector.

The song though is not just in news for being an actually good rap song, but also because of the heavy similarities between the music videos of it and South Korean boyband BTS member, RM’s 2015 song Do You.

The video cinematography, set design and even costume design resembles the latter’s video a lot.

Although the lyrics are original and new, the concept behind the songs is slightly similar. Both the songs talk about the societal issues each is facing, but where RM talks about problems related to the Korean society like individuality, plastic surgery and more, Raftaar’s song is about the Indian political and social situation.

The song also has a few lines from the famed Urdu poet Saadar Hasan Manto, on whom the film is based, and is trying to make the society reflect on the kind of complacency and hypocrisy it has at various turns.

A few lyrics from Mantoyiat are:

However, where the lyrics might be original, the music video that is directed by Shalini Harshwal, a Mumbai based director, Mantoiyat, takes heavy ‘inspiration’ from the Do You music video apparently, from the set designs to close-up shots of Raftaar’s face, his all black and flowy type of costume to mixing Raftaar’s shots with a few different ones like of Siddiqui’s Manto sitting on a desk.

The only difference between the music videos would be that RM’s had a girl and Raftaar’s has Nawazuddin and while one is made in colour, the other is in black and white.

There is even one sequence in RM’s music video where the mics that are surrounding him turn to bulbs that are alight around him.

That entire thing is also copied as it is in the Mantoiyat MV.

Read More: BTS RM And Sexist Lyrics Saga Shows A Problem With The Current Generation Of Not Forgiving No Matter What

The similarities were instantly caught online once the song released and Indian fans of BTS immediately called out Mantoiyat and Raftaar for doing a total copy of the mv.

Listen the lyrics of the song by raftaar are great no doubt but this is….pure copy. Kpop is ridiculed in India and termed as gay but now an Indian rapper copied from a kpop artist…..atleast give credits. The only difference is the filter here….. pic.twitter.com/Ku6RcbxHSi

After all this backlash, Raftaar finally came forward and tried to clear up the situation. In a tweet, he clarified that he had no hand in the direction of the music video but he did acknowledge the resemblance between the videos and was sorry about it.

The power to give credits is not in my hand. If it was, I would have written “video sets inspired by DO YOU”.
As an artist I love the way you all are standing up for yours. I only have authority over my part of the content and thats the music and lyrics. I feel sorry for that.

At the most, the most decent thing would be to give proper credits to Big Hit, BTS’ agency, BTS and the director of the Do You music video.

This is also not the first time that Bollywood has been called out for plagiarising or taking inspiration from K-pop songs. Earlier it used to be Western music either UK or American songs that were copied, but it seems after repeatedly being pointed out, Bollywood has started looking elsewhere.

Earlier in the year, it was also caught on social media that the 2017 Shah Rukh Khan starrer Raees’ song ‘Zaalima’ was quite similar to the iconic ‘Eyes, Nose, Lips’ song by another K-pop band Big Bang’s Taeyang that came out in 2015.

Not only that, but the song ‘Baatein Kuch Ankahee Si’ composed by Pritam for the 2007 movie Life In A… Metro entirely copied the song ‘Ah Reum Da Oon Sa Ram’ from the original sound track of My Name is Kim Sam Soon.

Even a south Indian Telugu film called Mr. Pellikoduku had a song called ‘Musthabai Vasthundi’ which entirely picked out G-Dragon’s (Big Bang’s leader) vocals from their song ‘Fantastic Baby’ that came out in 2012.