The 5th episode of GoT is out and we are barely one episode away from the end of this long and tiring journey.

Next week, the last and final episode of Game of Thrones will air, but it seems that this episode just might have burned some bridges with fans.

Considering how loved and admired this show has been till yet, with a strong start-cast, brilliant story, direction and more, the show did tip down a bit during the last few seasons.

However, the 8th and final season was still hailed as a pretty good one especially the 3rd episode when Arya like a bad-ass managed to kill off the Night King.

The one after that was anyway getting some bashing especially because of Jaime, but it seems that the 5th episode, The Bells, has managed to piss off a lot of fans, for a number of reasons.

The entire social media is filled with disappointment and mockery of how the GOT people have managed to destroy a once upon a time great show.

I just wanna understand what was the point of Dany's arc? You want a mad Targaryen you had Viserys right there. Why would they let her grow from an abused girl, free slaves, help people for 7 seasons just to ruin her character in 2 eps? Disgusting. #GameOfThrones #Daenerys pic.twitter.com/OaCWEliQnl

We waited 2 years to watch Daenerys kill kids #got pic.twitter.com/8q3jB15yfL

George R R Martin: so Cersei will be killed by a brother, Daenerys is the breaker of chains and frees innocents, Tyrion is the smartest man in the seven kingdoms and the Golden Company are some of the best soldiers the world has ever known

The general agreement seems to be that the episode is perhaps one of the worst written ones till yet and I would agree.

The episode was so boring and lazily written that I literally saw it while skipping forward, because I could not bear seeing the travesty before me.

Here are some of the things that really irked me:

Cersei, the gloriously vengeful queen who would finish away any and all of her enemies with no regard to anything.

This character has been one of the strongest and most scary villain of the show since the very beginning. Obviously her end was something that was eagerly awaited, fans were holding their breath in order to see how Cersei would finally meet her death.

So the fact that she died by getting crushed under a building was just… so extremely disappointing. This was not the kind of end that she deserved, sniveling, scared and crying while in the arms of the person she loved. 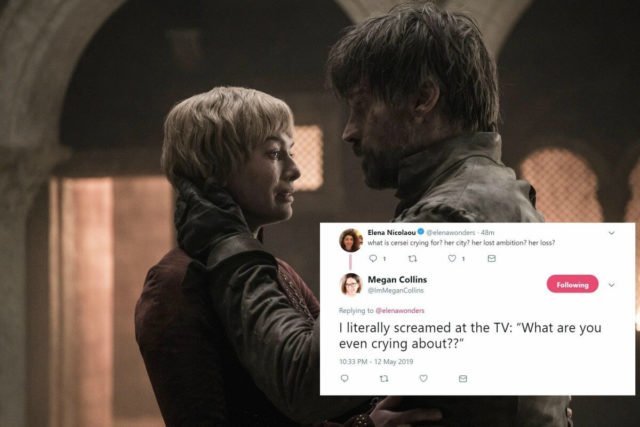 In this not only the makers destroyed Cersei’s character but also Jaime, where a better fit would have been that the latter be the death of the former.

Now that would have been poetic and justice in all forms, but instead we got Cersei and Jaime getting a freaking Romeo Juliet death.

Daenerys was one of the most inspiring and empowering characters in the beginning of the show.

The Mother of Dragons, the rightful queen of the Iron Throne, the rescuer of slaves and so much more. To see her descending into madness just so the crown can be given to Jon Snow, is so insulting to her character and totally different from the books.

Apparently, according to some people, George R R Martin had written a very different Daenerys, whereas the makers of GOT have reduced her to being the enemy now something that the brave Jon Snow, in typical hero fashion will have to end. 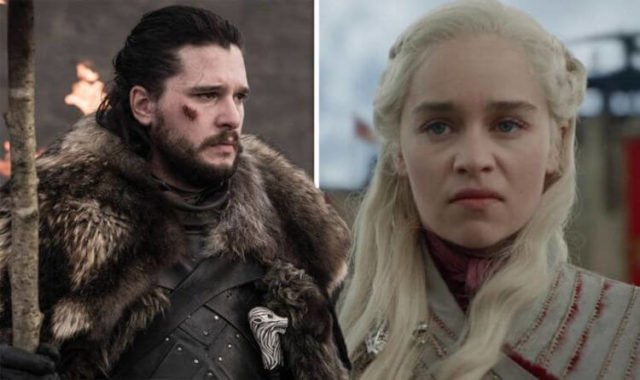 To be honest, there is just too much happening and too little time which is ironic considering the show has been going on for almost 8 years with a good hour long episode run time. You don’t always see shows having 1 to 1.5 hour long episodes, so there is no restriction on time as such.

But at the same time, you can feel the makers rushing through it all, which is evident in the 180 that Daenerys’s character has done from being a positive and strong character to the mad queen.

At the same time, Jon Snow being set up as the hero of the show and all is just too cliched and filmy and I don’t need more Bollywood tropes here.

Also, had Jon been a genuinely inspiring male character, somebody is one of those people that don’t necessarily want leadership but do take up the role when it calls for it then I’d have understood. But Jon right now, as per my observation just looks like a man who could care less about the throne and not at all like an admirable leader.

So these were just some of the things that irked me in this episode and during this entire season really. Let us know what disappointed you in this episode in the comments below.