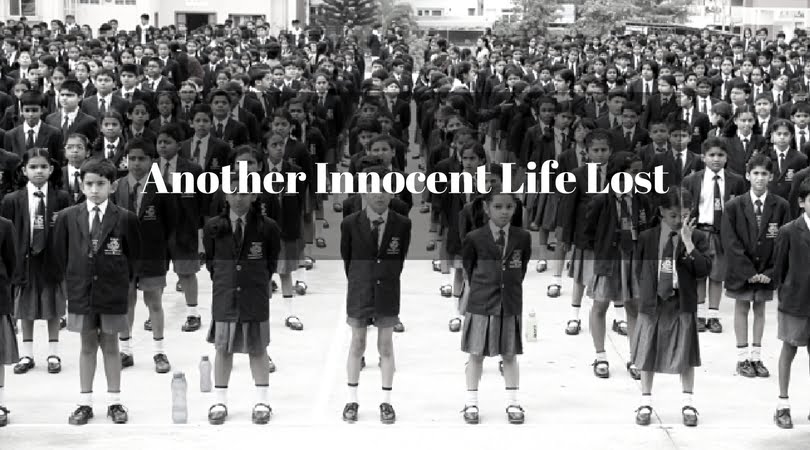 If you have been following the news lately, you must have come across the tragedy of a 7-year-old student being found murdered within school premises. The news has shaken the nation to the core, pushing parents to ask in unison – how safe are our children at these self-proclaimed ‘temples of learning’?

The outrage is visibly everywhere. But seriously, does this nation really even care about the child who was murdered? Apart from the hullabaloo that has been going on in the media, our Union Human Resource Development Minister Prakash Javadekar has promised to take stringent action at increasing the safety measures at schools. Congress has demanded immediate action and people have been protesting on the streets.

How much security can this really bring into schools? Who is responsible for that security?

The school authorities, that would be the standard response.

But is their suspension going to magically stop child abuse in Indian schools?

Also Read: Was Anitha’s Suicide The Price To Pay For The Unfair NEET Exam?

Schools are probably the most important place in a person’s life, apart from home. The Supreme Court’s has issued an order to CBSE, Centre and the Haryana government for realising the true status of safety measures observed in schools here, but that hardly guarantees any stringent action against child abuse.

On the other hand, the news of the Ryan International School’s principal suspension prompts me to query, is replacing the decision makers in school administrative bodies going to be a solution to all evils? I am not in support of any party here. Like in every damn criminal case, it can be sufficiently reasoned that one could never really know what is going on in a person’s mind until it happens.

And please stop slinging mud in public against each other.

Should I be surprised by how every situation in India quickly becomes a political blame game? People pour out on the streets, some politicians make some promises, some people are fired and everything is quietly swept under the carpet. Does anyone take real responsibility for the injustice that victims, or their loved ones, in question suffers from? We are not a nation which learns lessons. We are a nation of people who back bite and gossip.

“Ryan murder: Blow-by-blow account of how Pradyuman Thakur was killed in his Gurgaon school” This is what India is reading right now. A Crime Patrol Episode script in the making.

So, according to reports, the school board trustees are all under the radar and the chairman is being investigated. Reports are being filed of how Ryan International School has been breaking safety rules all these years; oh btw, the background of the bus conductors was never checked before giving up the safety of these children in their hands.

This might sound like a bit of a rant, but here’s the truth – people will soon forget that a child’s future is literally dead and many more futures are at stake.

People forget is that rapes have not stopped since the night Nirbhaya was tortured and killed.

People forget that children are abused within the four walls of their own homes and in those cases, you cannot suspend the parents.

It has not been too long since the Gorakhpur tragedy happened, and as a citizen of this country I am using this privileged space to vent my anger against a system that is only interested in politicising the innocent lives over chai and sweeping the ugly things under the blanket of identity politics.

How many more lives have to be wasted before we develop a culture of responsibility starts germinating in this society? And before you get into the ending discussion of how unsafe schools are, tell me this, do you even know the boy’s name?