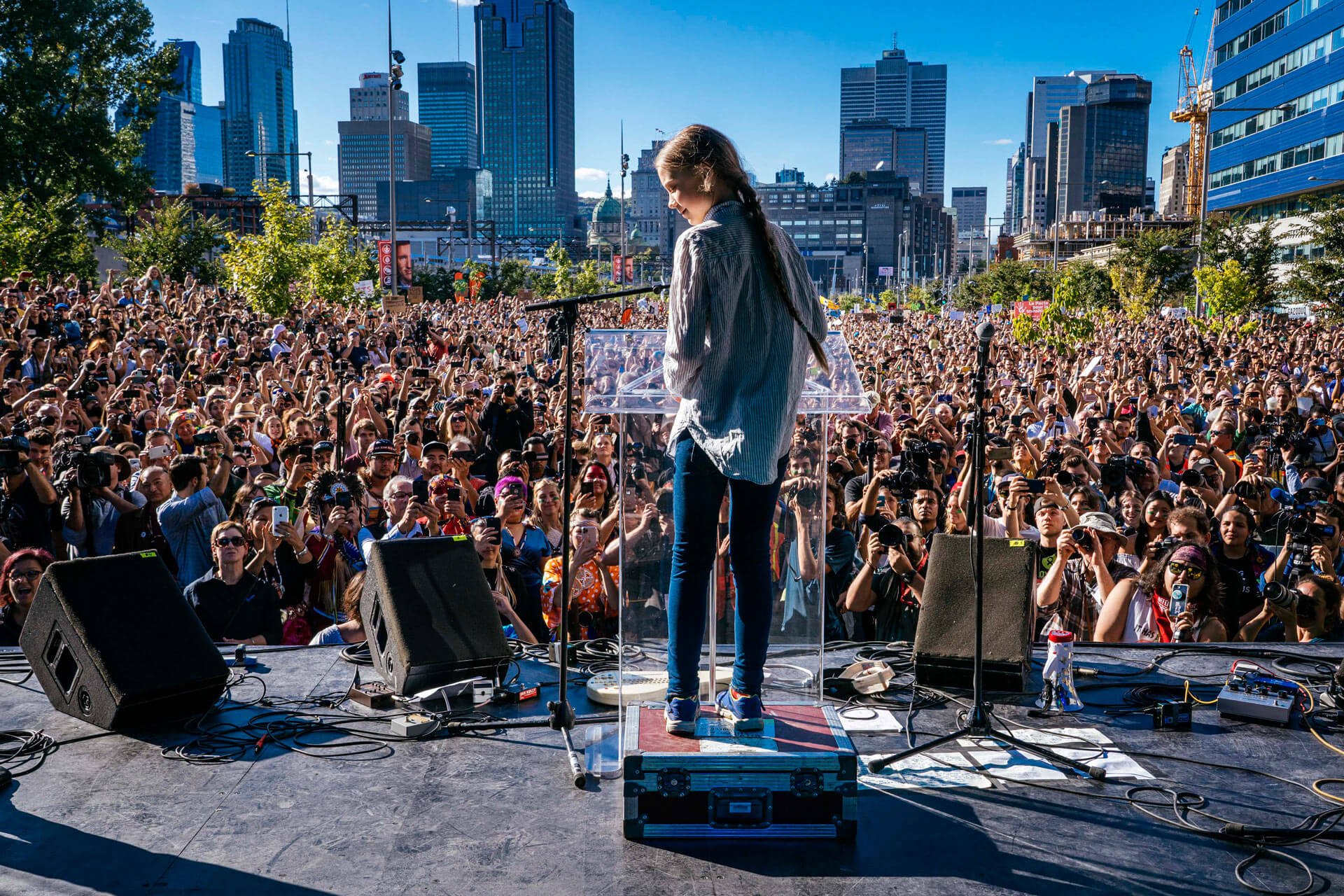 According to a new study, people who know about the teenage climate activist, Greta Thunberg, are more likely to take affirmative climate action than others.

What is it about this young Swedish schoolgirl that inspires such confidence and integrity in others? 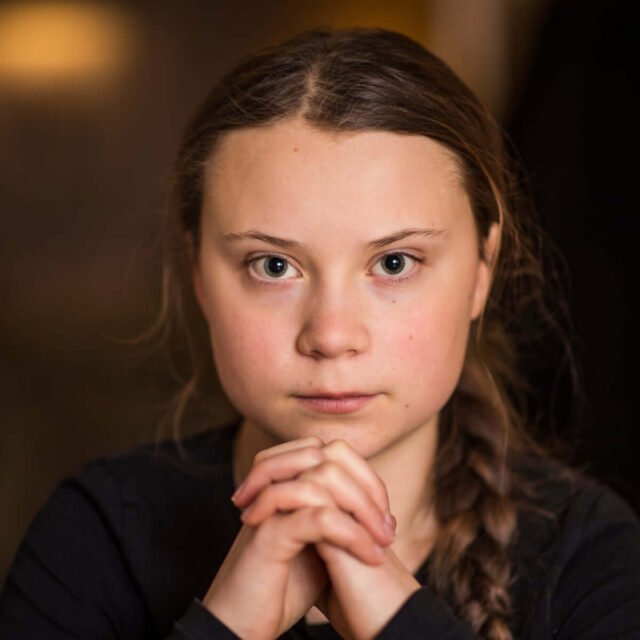 Is it her lonely stand outside her country’s Parliament that compelled people to place their belief on her? Or is it the fact that perhaps everyone can make a difference, no matter where they are placed in life?

How Greta Thunberg Became So Aggressive About Climate Change

Greta Thunberg, an ordinary teenage girl who is 18 but looks 12, became the icon of a generation by merely speaking truth to power.

Her mother, Malena Ernman, is a leading Swedish opera singer and her father Svante Thunberg, is an actor who is also a distant relative of Svante Arrhenius, a Nobel Prize-winning chemist for his study on how the carbon dioxide in the atmosphere increases the temperature on the earth’s surface.

Thunberg became obsessive with the topic of ‘climate change’ when her primary-school teacher showed a video of the same in class; starving polar bears, extreme weather and flooding. She was 11 years old then.

Soon after that class, she fell into a deep depression. For months, she stopped speaking and ate so little that she was nearly hospitalized.

Why? Greta has Asperger’s syndrome, obsessive-compulsive disorder (OCD), and selective mutism, which means that she’s unable to operate on the same emotional level as others.

People with Asperger’s syndrome are classified as high functioning (intelligence above average) and are usually direct, speak their mind and are honest. They are also determined and have a strong sense of social justice.

Such being the case, Greta had a rather powerful reaction to learning about the climate crisis than her peers. Because she doesn’t process information in the same way neurotypical people do, she couldn’t simply shrug off the fact that her planet was in peril.

But is her response to the ‘climate crisis’ really rational and not just a radical left fantasy?

How Did Greta Become Such A Phenomena

In May 2018, Greta wrote an essay about climate change which was published in a Swedish newspaper. Upon reading her article a handful of Scandinavian climate activists contacted her and suggested organizing a school strike at Marjory Stoneman Douglas High School in Parkland to gather attention on the issue.

That’s because many student activists from the same had organized school strikes to protest against gun violence in the U.S.

That’s how Greta’s infamous school strike began. She also put together a bunch of flyers with facts about extinction rates and carbon budgets, sprinkled it with her wittiness which made her stubbornness go viral.

Read more: Forget Greta Thunberg, This 11 Y/O Indian Girl Sued 5 Foreign Nations But Not India For Harming The Climate: Why?

Then, on August 20, 2018, Greta decided to game up her protest and arrived outside of the Swedish Parliament, carrying her homemade school-strike sign and stubbornness to protest outside the building.

In just a few days, the status quo of the protest had gone from one to two, then eight, then 40, then hundreds and then thousands.

By early September, Greta’s protest had reached far and wide in Stockholm when she announced that she would continue to protest and (school) strike every Friday until Sweden signs the Paris Agreement. 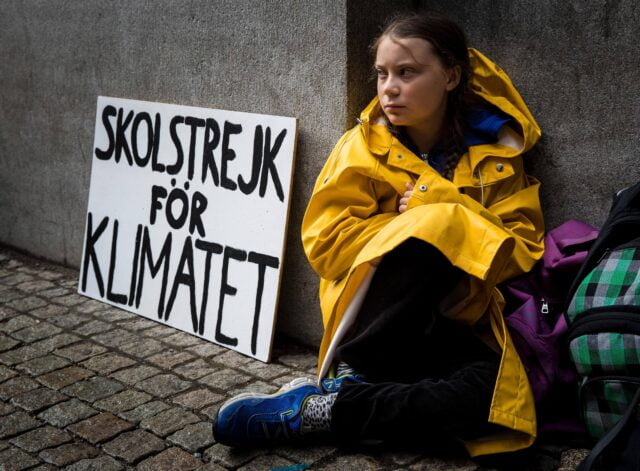 By the end of 2018, tens of thousands of students across Europe joined Greta’s movement and started skipping school on Fridays to protest. And by September 2019, climate strikes had spread beyond northern Europe.

Just over 2 years ago, a quiet, stubborn and friendless teenager woke up and sat outside of schools and parliament building by herself for hours in an act of singular defiance.

Then, fourteen months later, she had suddenly become the voice of millions and the symbol of a rising global rebellion fighting for a collective goal, ‘climate crisis’.

Is Thunberg An UN PR Product?

According to Swedish journalist Henrik Alexandersson Greta’s September 2019 speech, “How dare you!” at the UN which made global headlines was delivered to an empty room.

Even when Thunberg took to extend her support to the farmer protest in India, she accidentally tweeted a “toolkit” document instead. 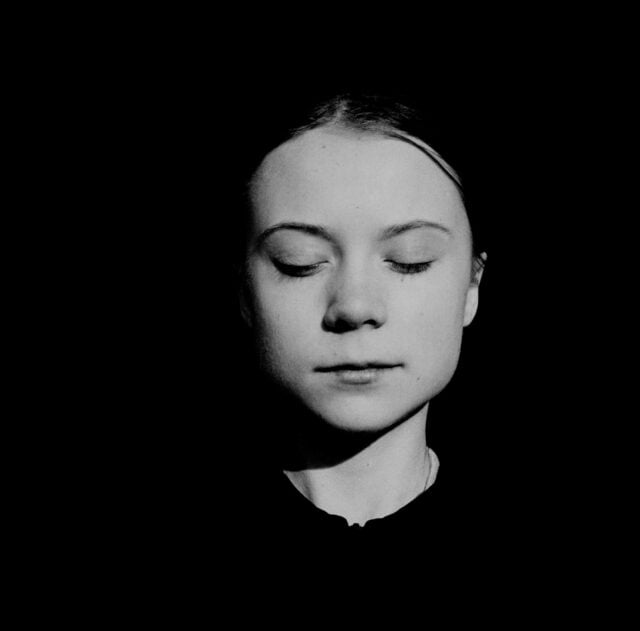 The ‘toolkit’ content happened to be an advisory guideline on how to show support for the protests. Which raised many brows on the young climate activist. The revelation not only drawn fury against Greta but also raised the suspicion of a conspiracy by an organised overseas network.

It won’t be an exaggeration to say, given her qualification and experience in the real world that her sudden rise to fame was probably a well-orchestrated PR campaign. After all, she skipped school, took a sabbatical year from the school in 2019, which ended in August 2020 when she returned to the classroom.

Many have even started to raise the question of whether she’s qualified to protest climate change without having a full understanding of the reality yet.

After all, it might be a possibility (given her condition) that Greta’s argument is nothing more than an emotional appeal to “do something” because she believes that otherwise, the world will come to an end.

Even though Greta’s story to fame is quite inspiring but it’s not all black and white. It’s a tad bit grey as well. Thunberg represents a movement that wants us to shift back to a pre-industrial world. An era with no scope for technological/scientific innovation.

Her demands reject the use of any technology or market mechanisms to cut carbon emissions, carbon capture and storage, carbon trading, geo-engineering and biofuels, to acknowledge and practise the traditional knowledge and wisdom of indigenous peoples and local communities.

Many would agree… but when it was tried out, in real life, by Pol Pot, former Cambodian Prime Minister, the process killed off 25% of Cambodia’s population. (What are your thoughts now?)

This is what a misguided vision can result in, eradication of population on a large scale. The issue here isn’t about ‘cut in technological advances’ but rather about the way we want to address the climate crisis. And panic is not the right way to go about it (that I’m sure of).

Of course, there’s much work and issues that need to be addressed to achieve the collective goal of sustainability, however, panic and fear-mongering are the least we need.