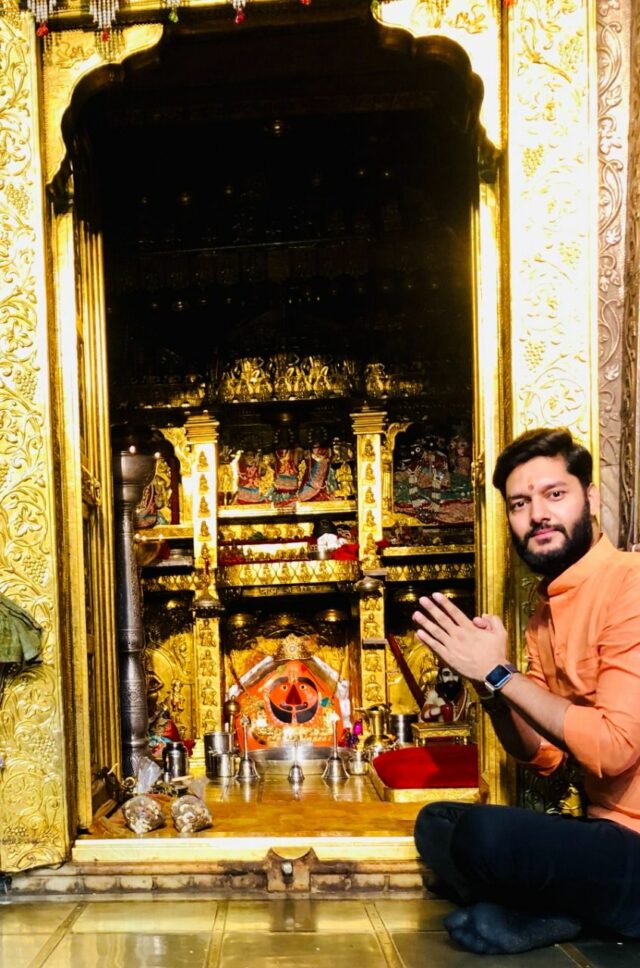 Salasar Balaji temple, situated in the Churu district of Rajasthan is a very old and famous temple of Lord Hanuman. Devotees from all over the world visit this temple and get their wishes fulfilled. While the temple is famous for several various reasons, one of the most interesting facts about Salasar Dham is the idol of Lord Hanuman.

This is the only temple in India, where the adult form of Hanuman ji seen with the idol having a beard and moustache. Balaji Dham has a very interesting history of how it was established. Among other traditions, one that is being diligently followed from the time the temple was established is passing on the responsibilities of worshipping the idol to the next generation.

Nitin Pujari Ji, who is currently the priest of the 9th generation briefly explains the history and importance of Balaji Dham. Talking about how the idol was established, he shares the story of a farmer from a village named Asota. While he was ploughing his field, he found two idols covered in clay. When he and his wife cleaned off the dust, they realised it was the idol of Lord Hanuman. The same day the Thakur of Asota village had a dream where Lord Hanuman instructed him to take the idol in a chariot and wherever the chariot stops, build a temple there.

The farmer told the Thakur about the idols found in the field and then the idols were taken in a chariot. The chariot stopped at Salasar and the Balaji temple was built. A devotee of Lord Hanuman, named Mohandas Ji lived in Salasar and he also had a dream where Hanuman Ji told him about the idols and building the temple. When the idols were brought to Salasar, Mohandas Ji became the first priest and starting worshipping the idol.

Nitin Pujari Ji is the 9th generation of Mohandas Ji, who is carrying forward the responsibilities of worshipping Balaji. Talking about the importance of Salasar Balaji, Nitin Pujari Ji shares a few interesting facts about the temple.

Nitin pujari ji further adds that every year two big fairs are organised where millions of devotees come to take the blessings and get their wishes fulfilled. However, in wake of the pandemic, the fairs were not organised last.

Salasar Balaji Dham is now open for the devotees from 1st July 2021. However, keeping in mind the safety and avoiding overcrowding, the temple trust has issued some guidelines. Only 200-250 devotees will be allowed to visit in a day. Those interested in visiting the temple will have to show the negative repost of the covid test or the certification of vaccination. Devotees will be allowed to visit only after online registering on the official site or the app and getting a token.

Nitin Pujari Ji praying for the good health of all the devotees requested everyone to follow the guidelines and ensure health safety first. He also said that those not able to visit the temple can do “Live Darshan” on his social media channels, Facebook and Instagram.

Watch: Satyajit Ray’s Movies That Were Globally Watched And Appreciated

Movies Sriya Kundu - July 20, 2021
Satyajit Ray was a highly gifted man with an extraordinary vision and an impeccable taste. A descendent of the Ray family which was exceedingly...

Breakfast Babble: Here’s How I Came Closer To My Parents During This Lockdown: A...

ED Originals Shreshtha Goswami - July 20, 2021
Breakfast Babble: ED’s own little space on the interwebs where we gather to discuss ideas and get pumped up for the day. We judge...