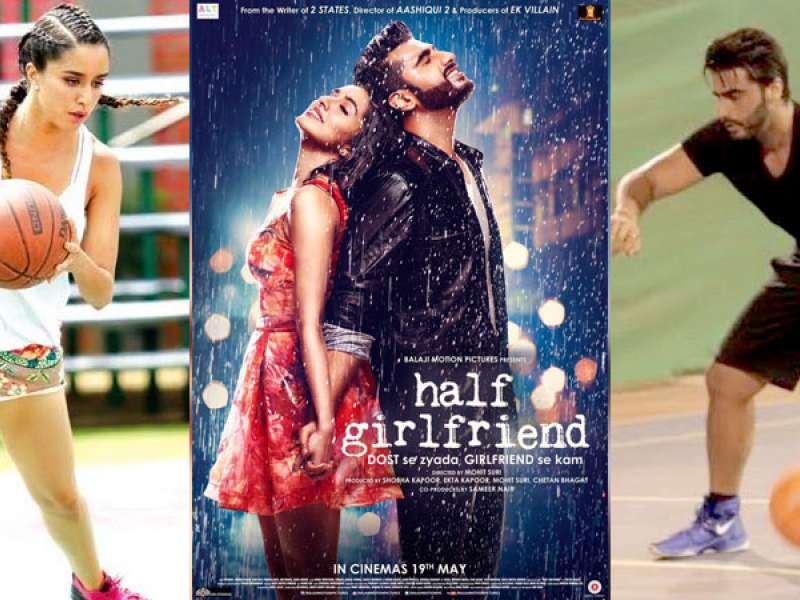 Two States wasn’t enough to scar our minds that now Arjun Kapoor has acted in another flick based on Chetan Bhagat’s novel. Half Girlfriend, what do you even mean by that?!?

Interestingly, the tagline that goes along with the movie title says, “dosti se zyada, girlfriend se kam”. Yep, that’s right. And no, you can not unread that.

You know something is wrong with the industry when they try to explain the concept of casual dating by that tagline or do they? I seriously haven’t read something so ironically flawed in a long-long time.

And ohh-my-god that awful trailer. Honestly, I am going judge you real bad if you don’t find the trailer cringeworthy! I have never seen a shittier trailer.

The opening shot is in St. Stephens where the Bihari boy Madhav is giving an interview for admission. I must appreciate Arjun Kapoor for doing a good job imitating Bhojpuri. Because that is exactly what he is doing in the entire movie, “imitating” an accent which looks super forced and fake.

And hey, congrats to the panel of interviewers who are giving a tough competition to Arjun in the scene. The accent of all the people in the room is like a battle between worse and worst!

And then enters the ‘top ki ladki’, Shradha a.k.a Ria. Now Shradha looks phenomenal in the little screen time she has been given in the trailer. And obviously that’s how she is supposed to look, right? After all toppers are known for their looks!

And, Mohit Suri I don’t know if you realised it but Arjun Kapoor is NOT fit for sports quota. What were you even thinking while casting? Arjun can’t even get normal hindi right and you gave him half bhojpuri-half hindi dialogues?

Another disturbing element is all hot girls are nothing but demons waiting for opportunities to prey on oh-so-innocent guys, “yeh bas tumko ghumayegi”.

The film intending to raise the issue of discrimination based on spoken language of people who come from small places itself ends up discriminating against the Delhi ki ‘top ki ladkiaan’.

The film shows that the only purpose of good looking girls in college is to give guys from small town fashion complex and make them feel inferior.

Honestly, Half Girlfriend is a half baked Bhagat script, a half attempt of making a good movie by Mohit Suri and a half nuanced performance by Kapoor. The trailer for me lies between half worse and half worst.

Lastly, you don’t “wanna” spend half a penny on watching something half cringeworthy and half disgusting like this.

P.S.: If you were thinking of using “Wanna play, half court?” as a pickup line, ABORT MISSION. ABORT. MISSION.

While you’re on it, check this out: Aligarh, The Movie: Breaking A Few Stereotypes Yet Continuing With Many

4 States In India With The Highest Number Of Active Covid Cases In June...