The in vogue platter for today is SILENT DISCO.

The word “Silent disco” does surely sound like an oxymoron because Disco’s without loud music are basically old people’s club with food drinks and maybe a table of cards. But don’t worry this is not an grumpy Aunty-Uncle evil scheme to restrict loud music parties to 8 o’clock but a solution to make it run even late than that.

At a silent disco music is played as loud as ever but only people with Radio transmitted headphones can hear it. Late night clubbing problem solved in 2 words – HEADPHONE PARTIES. First mention of this technology was in a Finnish movie called “A Time of Roses” in 1969 where it was only a fiction. This idea appealed to a lot of Eco activists and was brought back to the people in 1990 and was popularly launched by the Bonnaroo Music Festival in 2005 where concerts were held via this technology.

After EDM this may be the next big thing that has come to India.

“Silent noise” is a company at Goa which started with silent parties in Goa and have been very successful.

The beauty of these parties is that it doesn’t have one but three DJs playing at the same time and as everybody has headphones, one hears only the music they like. Each headphone has certain colour codes, so that you have the liberty to choose whichever DJ you want without being interrupted by the other music. That sure does give you the power of choice.

Other places to enjoy a silent disco are Pebbles at Bangalore and Spring Club, Kolkata. But why do we need a change from our conventional disco? 1. The noise pollution conflict. It is not just the human population but also the local wildlife that gets troubled by loud music. But with this even if “Aunty police bula legi yeh party yuhi chalegi”!

2. One can give themselves some rest after the continuous exposure to music and still enjoy the ambiance of the club. The people won’t feel deaf after all night clubbing.

3. One gets the feeling that they belong to a group – be it the Dancers or the Talkers. “Girls need to chat!”

4. Focus on the music is more. Not just “Waa Naaa Laa” you can hear the actual lyrics of the song.

5. Many parties can happen together at one place.

6. Clubs and parties can happen anywhere. No need to go to faraway farmhouses at the end of the world to avoid the music-time barrier.

7. And Of course an interesting trend to follow. Kinda bored with the normal go in the club-dance-drink-eat and out.

Another interesting aspect of Headphone dancing was seen Eindhoven where in an ice skating rink people broke out into a flash mob with headphones on. Maybe in the next Friends with Benefits movie we will see this at the end.

Can watch it at Eindhoven headphone flash mob

We thought it would be interesting to test the ground a bit and ask younglings what they think about this latest trend/fad or have they tried it yet or not? So put your headphones on and dance the night away!

And save the environment. : P  *noble cause* 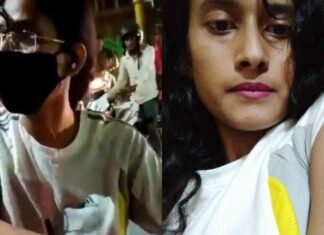 Natasha Lyons - August 3, 2021
A video is being shared widely on social media, where a young girl is seen repeatedly beating a cab driver. This incident took place...