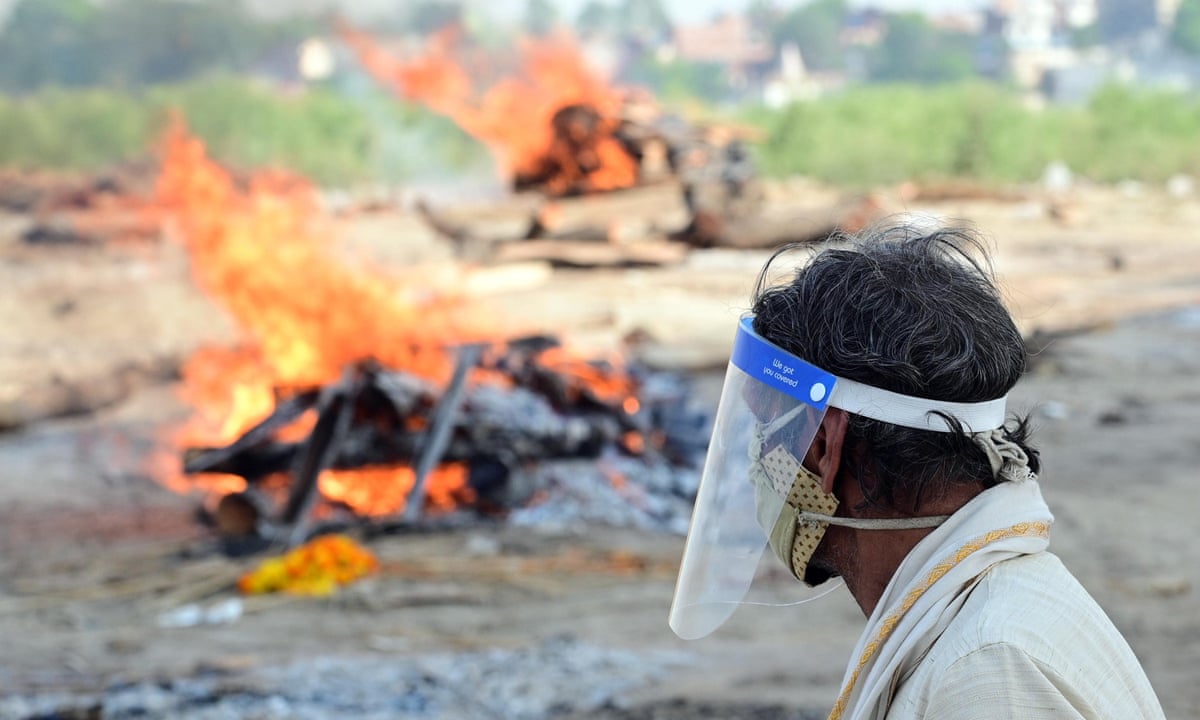 The villagers spotted around 40-45 dead bodies floating along the bank of the Ganga at the Mahadev Ghat at Chausar village in Bihar.

The bodies were mostly in a decomposed stage and it is suspected that most of the dead bodies belonged to Covid-19 victims. Several videos showing the same have gone viral on social media, stimulating rage and panic.

What Is Happening In Mahadev Ghat?

“Nearly 30-40 dead bodies can be seen in the Ganga and there are stray dogs roaming around. Yes, most of them are likely to be those of COVID-19 victims,” claims Ashwini Varma, social activist, and local lawyer.

“The dead bodies are bloated. They seem to have been in the water for at least 5-7 days. It needs to be investigated from where they’ve come. They could be from Varanasi or Allahabad,” a senior official of the district K.K. Upadhayay told media persons.

“We were alerted by the local chowkidar that many bodies have been spotted floating from upstream. We have so far recovered 15 of these. None of the deceased happens to be a resident of the district,” according to Chausa BDO Ashok Kumar.

Is India Robbing The Dead Of Their Peace In Their Death? Yes!

The outrageous cost of the cremation could have forced the poor to dispose of the dead bodies of their relatives, in the river.

“It nearly costs ₹30,000-40,000 to cremate a body. So the poor people prefer to push bodies into the river Ganga,” said Ashwini Varma. “Stray dogs are devouring these bodies which could be of COVID-19 victims. It will spread the virus as well,” he further added.

It’s just sorrowful that these sky-high cremation prices are robbing the dead of their dignity and last rites in death. Some complained that even those manning cremation ghats were charging a fortune whenever people reached there with the body of a near and dear one who died of the coronavirus.

Read More: Are Private Hospitals Trying To Cash In The Coronavirus Crisis Situation And Fleece People Of Huge Amounts?

“There is also a shortage of wood and other material required for cremation. Availability of these has taken a hit because of the lockdown. So many bereaved family members are impelled to immerse the bodies of their departed relatives in the river,” one of the residents said.

Generally, family members of a COVID-19 victim are not given the body by the administration which promises they would perform the last rites observing the protocol in place for the coronavirus, another local stated but that never happens.

“What indeed happens is that the officials develop cold feet later and fearing that they might catch the infection themselves, they dump the bodies in the river and flee. Little do they realize that they are also polluting the river,” he added.

He also added “many Uttar Pradesh districts are situated right across the river and the bodies may have been dumped in the Ganges for reasons not known to us. We cannot confirm whether the deceased was indeed COVID 19 positive. The bodies have started decomposing. But we are taking all precautions while ensuring that these are disposed of decently”.

Tradition Turning Into A Horror Story?

Villagers are just not dumping bodies in Ganga because they cannot afford to cremate the bodies of their relatives. This is an age-old practice that is prevalent in India to date.

This process consists of a dom (cremator) taking charge of a body, then the body is half burnt and they throw it into the Ganga while chanting verses for eternal peace of the deceased and their ancestors.

It is believed that this will break the endless cycle of Life and Death and one may finally achieve Peace or Moksha.

But now that the number of deaths is higher due to Covid-19 and the cremators have even less time to half burn a dead body, they are just dumping the dead bodies in the river.

Ideally, they should be taken to crematoria or buried in the burial grounds. They believe that dead bodies floating in the river are repulsive and offensive to the eyes as people take a holy dip or take ‘aachaman’ (mouthful of water) while corpses floating just yards away from them are unhygienic and unhealthy.

Although the practice of immersing the dead has reduced in some ghats of Kanpur, in some others it is still rampant. There are about 80 such ghats, where this practice is quite prevalent.

Buckle Up Or Die: The Government’s Motto

Despite the religious reasons or the weak administration protocol that the workers aren’t following, the situation in Mahadev Ghat is extremely shocking, with the dead bodies flowing in the river being torn apart by street dogs and vultures.

Soon after the news broke out, Twitter slammed the Bihar and UP government for their failure to provide better healthcare facilities and crematoriums.

I believe, without blaming each other the government should come up with a proper plan as the second wave of the virus is ravaging parts of India, with deaths rising significantly in recent weeks, most of the country’s crematoriums have run out of spaces and time to manage cremation.

It’s high time we realize that the country is not the epicenter of the global pandemic and it’s high time the government steps up in its game and comes up with a proper plan to deal with the virus and reduce the number of deaths.

But they should also come up with a more decisive and better plan to deal with cremating the deaths at least since they aren’t doing anything to stop the deaths.

40% Spike In Calls As Second Wave Of COVID-19 In India Leads To Rise In Guilt, Anxiety And Distress