Home Entertainment Did Kabir Singh’s Director Just Say That One Should Be Able To... 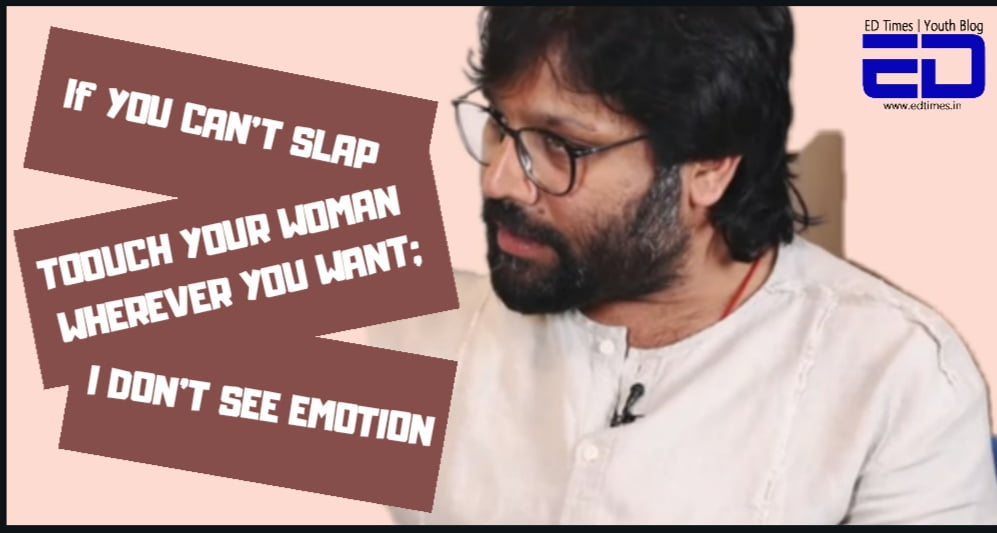 P.S- If you didn’t find Kabir Singh problematic, this one’s for you.

What was the name of the one-film-old director of (movie-cum-toxicity-sold-at-245-crores) Kabir Singh, again? Um did Anupma Chopra mention something like- Sandeep-WHAT THE HELL IS WRONG WITH YOU– Reddy?

If you think I just went out of line in describing the director, I need you to know that the guy pretended to forget movie critic Rajeev Masand’s name, twice in his interview, and referred to him as “the fat guy”.

This was the least of the bizarre things that Mr. Vanga chose to say on record. So if Rajeev Masand’s identity could be his body shape, I am still identifying Sandeep for his work. (I feel angelic)

If this is love Mr. Vanga, then God bless me I don’t need love in my life. But, let me not make this article about how toxic Kabir Singh really is.

Shekhar Suman went on record to say that there has been no glorification of toxicity at the hands of the protagonist Kabir Singh.

Shahid Kapoor defended his character claiming that there are alpha males like Kabir Singh in every college. So this was just a movie that mirrored real life rather than glorifying it.

I’m here for the people who have been justifying Kabir Singh in the name of cinematic expression. While there have been enough criticism, there are equal number of people critiquing the criticism.

Related: What Is Shahid Kapoor Insensitively Celebrating Amidst All The Kabir Singh Bashing?

While I would have loved to answer those questions and draw the line between depiction and glorification, I didn’t have to take the pain. Sandeep Reddy Vanga, brought on himself to do the honors.

In the infamous interview he chose to make the statement, “If you can’t slap, touch your woman wherever you want, I don’t see emotions”, clearly stating his definition of “true love”.

So while the defenders kept saving the movie, stating that it is just a mere portrayal, the director says it’s what love is really like.

Okay NO, Mr. Vanga, I don’t know what college have YOU been to, but according to non “pseudo” people, this is the definition of domestic violence and toxic relationship.

With respect to the “touching” part, you still need to have consent before you touch your partner; love or no love. You cannot put a knife on someone and threaten her to get naked.

You cannot kiss a woman or mark her your territory on the first day you meet her. Get a dictionary already!

“She slapped him first”

So now let’s get down to the basics- If you were someone who whistled in the theatre when Kabir slapped Preeti, you need to find a better role model.

Do not give me the crap of “Preeti slapped him first” like Shahid did. There is absolutely no justification for toxicity whether the woman is at the receiving end or the man.

Although I would have really appreciated if Preeti would have slapped him when he deserved it; right at the beginning when he kissed her or called her “meri bandi” but sadly Mr. Reddy made his choices.

If you’re a woman and waiting for a Kabir Singh, for both of you to be the epitome of monogamy, then look at healthy partners staying married for years and still respecting and appreciating each other. Kindly look for better role models in your life.

The fact that Vanga admitted his own proximity with the character of Kabir Singh and how it is inspired from his definition of love, makes it all the more problematic.

This could be the probable explanation of why he thinks it’s a personal attack on him rather than taking it as a positive and constructive criticism.

Not to forget, this is Vanga’s first movie in Bollywood so taking the criticism positively would have probably been more helpful rather than mindlessly attacking the critics.

If you’re still going to defend the movie or him, give me any comeback other than citing examples from other movies and questioning why we didn’t question it. Someone needs to begin from somewhere and who knows people would have ran to defend those movies too.