Amsterdam, Netherland – Crossway Global has delivered their promise to their investors on their global blueprint they laid out by successfully listing their CWG tokens on the WBF Exchange, the listing of their tokens has pushed the exposure of the token to another level as it means pushing the token into the sight of the global market, opening up the possibility of trading the token on the exchange by anyone in the world. 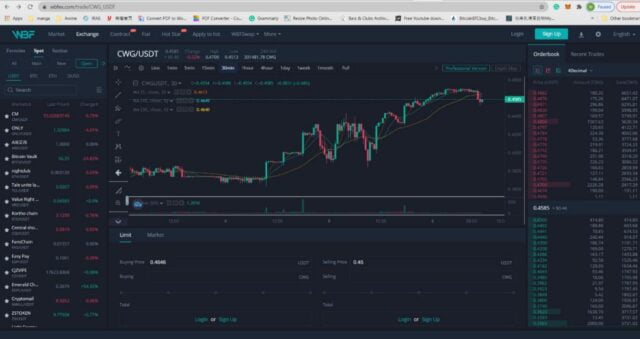 The listing follows after they have successfully sold all their tokens after completing all three private placements for their DAO offering. Perhaps all the hype and enthusiasm can be attributed to the Crossway Global Token (CWG) which is used to build a tokenised mobile gaming ecosystem where gamers and interested parties can have a share of the mobile gaming profits as well as being used in DAO participation, both management and voting.

A research on WBF Group shows that the exchange was registered in New York in 2017, and its subsidiary WBF Exchange is a leading global digital asset financial service platform which was registered in Singapore on January 2019. WBF have users from 177 countries and branches in 13 cities such as New York, London, Singapore, Ho Chi Minh City, Seoul, and Tokyo. WBF Exchange aims to build a digital financial service platform with the most currencies, the largest registered user base, a strong customer experience, and a stable and safe technical structure.

A spokesperson from Crossway Global commented that CWG has the potential to do very well in the trading market. The dual listing which requires CWG to be “mined” would prevent dumping from the early investors. Moreover, a part of the revenue generated from Crossway Global which they termed “NFT Funds” have been used to support the CWG pricing, utilising a buyback mechanism to “burn” CWG from the open market. The company has very good reasons to believe CWG’s price is well supported. At the time of writing, CWG/USDT trades at 0.4585, an increase of more than 9 times of its listing price at 0.05 mere days ago.

Crossway Global expects to see more and more non-blockchain brands make their way into the world of NFTs — especially in the gaming industry, and they will be striking partnerships with specialist blockchain projects to make this vision a reality. Reliable source from Crossway Global also reveals that the mobile gaming company will be launching a brand new NFT digital collectibles of the global football super stars in March and the first batch of design art has been released.

Facebook
Twitter
Pinterest
WhatsApp
Previous articleStudy Shows That India’s Teen Pregnancy Has Been Dropping Steadily For The Past 20 Years
Next articleWhat Is A Guesstimate? Here’s All That You Need to Know